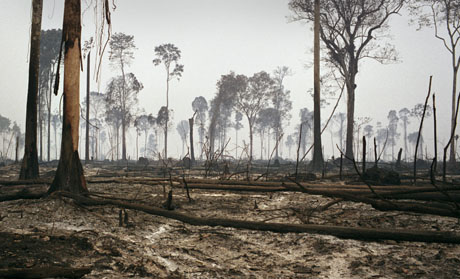 Brazil: An area of deforestation on the border of the Amazon rainforest burned down to produce charcoal and to grow soybeans or raise cattle. / Eduardo Martino/Panos Pictures

Logging, slashing, burning and clearances. From the Amazon Basin to Indonesia, each year vast areas of the world’s remaining forests are lost, increasing global greenhouse gas emissions. The UN believes the battle against climate change will only be won if poorer countries can profit from keeping their forests alive. But indigenous people who live in and around the forests are nervous.

The UN is negotiating a proposal called Reduced Emissions from Deforestation and Degradation – REDD for short – as part of the post-2012 climate agreement. If it succeeds, richer countries could eventually pay developing countries billions of dollars in return for them preserving their trees and cutting carbon emissions.

Rod Harbinson spoke to representatives from indigenous groups and conservationists. He began by asking Stuart Maginnis, from the International Union for the Conservation of Nature, why saving trees is so high on the climate change agenda.