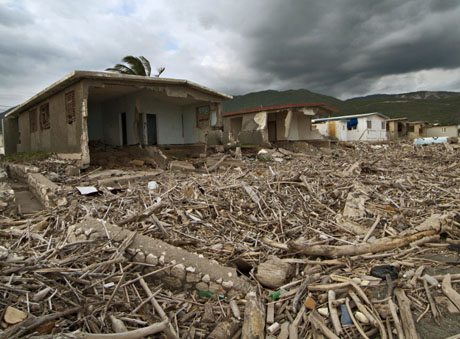 Hurricanes and rising sea levels are threatening Caribbean tourism. So how will the region’s most important industry safeguard its future?

Kory South has spent the last 15 years building his dream resort in St Elizabeth, Jamaica. But his dream is in peril from rising sea levels and stronger hurricanes. South has incurred millions of dollars in losses from hurricanes affecting the island over the last three years.

The passage of Hurricane Dean in 2007 left his Sunset Resort in Treasure Beach with damage to several rooms. Overall damage to the five and a half acre property from the storm – which packed winds of up to 230 km per hour – was estimated at around US$50,000.

South said the damage and attendant loss of income from having no guests was hard to take. It was equally hard, he said, to make a comeback from such disasters.”It is heart wrenching. Even though you have insurance, your natural instinct is to try to save everything,” said the hotelier, who had nine guests at his 14-room property at the time of the hurricane. “We really try to protect the place. We have business coming in and we don’t want to lose it.”

South is not the only one whose tourism business is under threat from climate change. Tour operator Conroy Walker is in the same boat. According to Walker, tourism has given him the freedom to be his own boss and the hope that his children will have something to inherit from him.”I don’t know my father. So part of my plan is that I really want something to pass down to my son, who is 17 right now,” he says.

In six years, he is hoping to pay off the cost of the tour bus he recently purchased while expanding his service. “If I can create employment for my son that would be good because I didn’t get that start. Without a father to help me, life has really been struggle,” says Walker.

He has, however, acknowledged that climate change and its effects on the Caribbean’s tourism industry could derail his plans. So he has added his voice to the call for regional governments to put pressure on rich, industrialised countries to cut their emissions of greenhouse gases.

“It will take a collective effort from not Jamaica alone but all the Caribbean states. All the Caribbean countries have to come together, have a conference and talk about the issues,” says the 42-year-old, who is also general secretary for the Montego Bay-based Maxi Tours.

He notes that the effects of climate change will be due in large part not to Jamaica’s own actions but to those of countries that emit high levels of greenhouse gases such as carbon dioxide. “Most of what is going to happen, Jamaica is not going to be a contributor to that. It is countries like America and so on who are contributing to [global warming],” Walker says.

The Fourth Assessment Report of the Intergovernmental Panel on Climate Change (IPCC) has made clear that the region – as is the case with other developing countries – is in peril from the changing climate. It is an ongoing change, the IPCC said, that will herald not only higher sea levels and fiercer storms but also warmer temperatures.

Despite this, Jamaica and the Caribbean appear slow off the mark in dealing with the devastation that the changes will bring to tourism livelihoods. To date, only limited measures have been put in place. And even then, the measures have not been geared to addressing climate change and its implications.

President of the Jamaica Hotel and Tourist Association (JHTA), Wayne Cummings, admits that a policy strategy on how climate change will affect the sector has not been forthcoming.

“[Climate change] has not actually formed a part of our immediate agenda, but it has been recognised as an important issue from the point of view of energy conservation. And we have been on top of that,” Cummings says. “Climate change is being spoken of with respect to things like carbon trading. That as a concept is relatively new for us and we have not yet been able to assimilate how we will be impacted.”

What his members have been doing, he says, is implementing measures that will help to cut their energy consumption. “We recognise the things we have immediate control over like energy conservation, which many of us have long taken seriously from a basic principle of renewables like bulbs, replacing equipment and so on in favour of more efficient ones,” Cummings says.

But even here there are problems as smaller properties are not in a position to afford renewable energy sources. “Economies of scale have everything to do with size so the smaller you are the less you are likely to, for example, retrofit your property, particularly in the face of competition,” Cummings says.

The government has sought to take stock of the island’s status concerning adaptation to climate change. This has been made possible through the preparation of the second national communication on climate change, which has a budget of US$405,000. That report, due to be completed this year, is being prepared for submission to the United Nations Framework Convention on Climate Change (UNFCCC).

Beyond Jamaica, there are entities like the Trinidad-based Caribbean Natural Resources Institute (CANARI), which has been working to promote regional research into how climate change will affect biodiversity and, by extension, tourism.

CANARI recently held a workshop in Jamaica that identified some of the gaps in the research on impacts to the region and suggested some ways forward.” The objective of the project is to develop a regional research agenda to strategically address our knowledge gaps. The findings of the report have implications for human health, food security, tourism, and disaster vulnerability,” says Leslie Walling, the senior technical officer at CANARI.

If the predictions of the IPCC are realised, the economies of Jamaica and other islands will suffer a decline in the tourism sector. Jamaica’s earnings amounted to an estimated US$1.9 billion last year, with 1.3 million stopover tourists and 1.6 million cruise passengers visiting the island.

At the same time, several hundred thousand people directly employed by the industry across the English-speaking Caribbean, which has a population of some six million, will be out of work. In Jamaica about 40,000 people are directly employed, according to the JHTA.

Meanwhile, Wayne Cummings warns against being overly alarmist about climate change. “We are not a bad news kind of organisation or industry. We thrive on good news,” he says. “For the moment the relevance of tourism… is how we fuel the success of Jamaica. We just have to be careful. We need to make note of [climate change], but we need to be careful not to further the demise of an industry that is our bread and butter.”