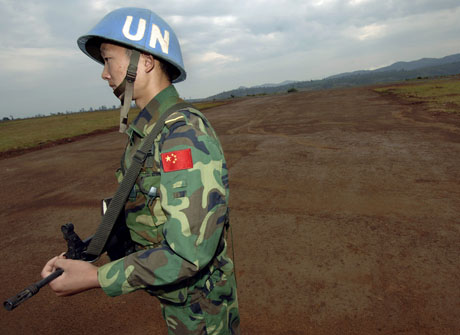 China has dramatically expanded its number of UN peacekeepers in recent years and now has more troops, police and military observers than any other permanent member of the UN Security Council.

“It is fascinating to see the People’s Liberation Army (PLA), one of China’s most conservative and secretive institutions, taking an increasingly active part in UN peacekeeping and a widening array of other multilateral security arrangements,” says Dr Bates Gill, SIPRI director and co-author of the report.

From its first deployment of 20 Chinese military observers monitoring elections in Namibia in 1989, China now has 2,155 peacekeepers. As the only developing country that is a permanent member of the UN Security Council, the report suggests that China’s presence can act as a useful counter-balance to Western influence in peacekeeping.

The report, based on interviews with UN and African Union analysts and field research in Haiti, Liberia, and Democratic Republic of the Congo, claims: “Senior African Union and UN officials believe that China’s participation in peace operations in sensitive areas such as Darfur, southern Sudan and the DRC helps to temper the host governments’ suspicions that the missions are really Western-led military interventions.”

Many of China’s neighbours, including India, Russia and Japan, have expressed concern over the country’s increasing military capabilities. The report suggests that contributing personnel to UN peacekeeping operations is one way for China to raise its profile as a responsible power and to reassure its neighbours and the international community it will act as a constructive and responsible power. “[China] can exercise considerable political weight and authority regarding peacekeeping matters, and all the more so as it becomes a greater contributor to peacekeeping activities in the future,” says Dr Gill.

China’s foreign and security policy underwent a significant metamorphosis in the mid 1990s, with the country pursuing “a more engaged, pragmatic and constructive approach in its external relations”, according to the report. Pang Zhongying, a Chinese academic who has commentated widely on Chinese peacekeeping activities, told researchers, “[Participation in peacekeeping operations] works in China’s national interest as the country begins to build a sound external environment for its long-term economic goals and development.”

However, adds the report, Chinese policy thinking is still dominated by the concept of state sovereignty and non-interference. This has been made clear by some of the recent positions China has taken the UN Security Council. When Cyclone Nargis hit Myanmar in 2008, China opposed the Security Council in pressuring the Myanmar government to accept emergency assistance on humanitarian grounds as it did not consider the situation was a danger to international security. However, China voted for the Security Council to be deployed in the post-election violence that occurred in East Timor (now Timor-Leste) in 1999 on humanitarian grounds. What is clear from China’s actions, says the report, is that it will intervene on a case-by-case basis.

Along with the country’s traditional view of state sovereignty, the report points out several other potential hurdles to China further expanding its peacekeeping contribution. The list includes shortfalls in political, military and bureaucratic will and a shortage of well-trained peacekeeping personnel with the necessary language and technical skills. In addition China has insufficient air and sealift capacity, limiting the ability of the People’s Liberation Army (PLA) to rapidly deploy peacekeeping assets over long distances, according to the report.