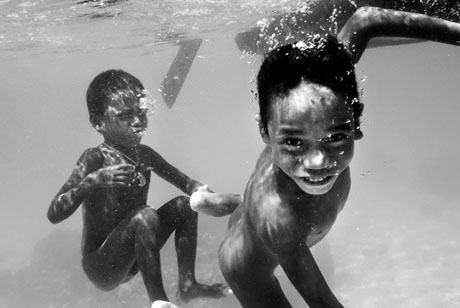 “Observations, assessments and practical experiences of indigenous peoples are essential in the climate change dialogue because most indigenous people are not strangers to climate and weather-induced vulnerabilities,” says Kirsty Galloway-McLean, who edited the compendium report, Advance Guard: Climate Change impacts, Adaptation, Mitigation and Indigenous peoples.

The case studies were drawn from reports by UN departments, NGOs, universities and research organisations from around the world.

“The report provides a current and illustrative survey of current climate change effect and tested adaptive responses,” says Ms Galloway McLean, a research fellow at the United Nations University-Institute of Advanced Studies in Australia, which published the compendium. “It highlights lessons to be learned from successful-and not so successful adaptive responses that are relevant to the global community.”

The report argues that indigenous groups have unique knowledge of how to cope with local-level climate change. One of the case studies details the experience of the Moken tribe from the Surin Islands marine national park in Thailand who survived the Indian Ocean Tsunami in 2004. Before the tsunami struck tribal elders noticed that “the sea was churned up and moving in an unusual way”. They raised the alarm for the rest of the tribe to move further inland, thereby avoiding the tidal wave which killed more than 5,000 people. The report argues that the Moken tribe survived because of their elders’ knowledge and experience of the sea.

“Much of the climate change literature reflects the approach of Western science,” says Ms Galloway McLean. “However, the availability of such data is scarce in many fragile eco-systems, such as islands, mountains and coastal eco-systems. These are the very systems in which most of indigenous people are living.”

By contrast, Western scientists could learn from the experience of indigenous people, Ms Galloway McLean suggests.

“Indigenous people have been among the first communities to actively engage with the impacts of climate change – both recording their observations and implementing their own activities to adapt to its ongoing and potential effects,” says Ms Galloway-McLean.

In Alaska longer summers have changed walrus migration patterns, reducing the hunting season to once rather than twice a year and making sea-ice hunting more precarious. The case study, ‘Walrus hunting in Alaska’, shows how indigenous communities have responded. Responses include developing cold-storage facilities to preserve the meat in order to supply the community all-year round and using fabric rather than walrus skins to make boats.

“Indigenous people have a variety of successful adaptive and mitigation strategies to share,” says Ms Galloway-McLean. “Most of these strategies are based on ecological knowledge and may include modifying existing practices or blending traditional knowledge and modern technologies.”