You are here: Home » Blogs & features » Print features » Climate refugees of the future

Climate refugees of the future 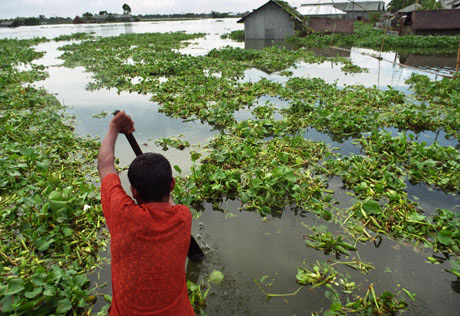 Boat transport in flooded Dhaka, Bangladesh. Bangladesh may lose 20 per cent of the country's landmass, which would displace up to 18 million people / Dieter Telemans - Panos London

Bangladesh is calling for the rights of environmental refugees to be recognised as the country battles rising sea levels and chronic poverty.

The water of the Buriganga River is pitch black and no aquatic life survives. Despite this it is still called the lifeline of Dhaka. Life is very busy by the Buriganga. Loaded with cabbages, a country boat has just reached the Chan Mia ghat (boat station) at the Sadarghat, the biggest river port of the capital of Bangladesh.

“The boat has arrived. I need to work,” Jalil Mia says and walks towards it. Two other workers give him a hand to unload the cabbages. Jalil, 41, moved to Dhaka a year ago, following the devastating cyclone Sidr which hit the country in November 2007 and left him penniless. He came to Dhaka from Bhola island, situated at the estuary of the Meghna River, around 400km south of the capital.

“Luckily we survived that night as we went to take shelter at a cyclone centre. But my house and all the furniture and even the utensils – everything was washed away,” he says.

Once a farmer, now a slum-dweller

Bhola is surrounded by the Meghna on three sides, with the Bay of Bengal to the south. Over the last two decades the island has gradually narrowed because of the Meghna’s erosion. Erosion is nothing unusual in Bangladesh. But the threat of climate change has made the country much more vulnerable.

Now Jalil, once a farmer, lives in a slum in the capital with his family. His two daughters, Yesmin and Rabeya, are going to school again. But his son Palash, a 13-year-old, has had to take a job at a glass factory in the old part of the city.

Bangladesh’s Institute of Water Modelling has shown that Bhola, home to over two million people, had a landmass of 1550 sq km in 1973, but only 1400 sq km today. The same thing is happening to other islands in the Bay of Bengal.

Many people from Kutubdia island have moved to Cox’s Bazar on the mainland, where they call their neighbourhood “Kutubdia Para” (village). “We did not want to forget our island. So we named our village after it,” said one old man, Mohammed Nasu Mia.

A report by the Refugee Studies Centre says that Bangladesh is one of the countries most vulnerable to rising sea-levels and in the top ten in terms of the percentage of its population living in low-lying coastal zones. Over 140 million people live there today, 40 million of them in the coastal area.

Dr. Ainun Nishat, the country representative of the International Union for Conservation of Nature (IUCN), says Bangladesh is on average just 10 metres above sea level, but the coastal region is even lower. “Roughly 20 per cent of our country’s landmass will be under water if sea levels rise by 89 centimetres. Such a catastrophe would displace roughly 18 million people,” he told a recent climate seminar. Loss on that scale, in such a densely populated country, would be a disaster he said.

Every year thousands of homeless people like Jalil and his family move to Dhaka because of natural calamities. Today around 12 million people live in the city, around 3.4 million of them slum-dwellers. Dhaka is growing at 3 per cent annually, one of the fastest rates in the world.

The government has begun working to increase the adaptive capacity of communities suffering from the impacts of climate change. But it has no immediate plans for displaced people – like Jalil and Nasu Mia.

In a visit to two south-western districts, Khulna and Satkhira, I saw how clearly the local community is aware of the effects of climate change. But many are unsure of the science, and some believe increasing natural calamities are signs of God’s punishment for wrongdoing.

Ingenious solutions are not enough

With the help of NGOs local people have been collecting rainwater and storing it in huge clay pots to use in winter when the natural salinity of their water supply increases – one impact of climate change.  In seasonally flooded areas, they have developed ingenious floating rafts with a bamboo base, upon which water hyacinth is piled and then covered by other aquatic plants or coconut husks to form a seed bed ready for planting. These floating gardens, called baira, are increasingly popular.

In another scheme called the Char livelihood project, supported by the UK’s Department for International Development (DfID), local people have learnt to build houses on raised plinths so they are not submerged when the chars (small river islands) flood. But even efforts like these will not be enough to stop people migrating to escape the effects of a changing climate.

Bangladesh’s finance minister, Abul Maal Abdul Muhit, has even said international migration is one of the country’s major adaptation strategies.In December 2008 member states of the UN Climate Change Convention held their 14th summit – COP-14 – in the Polish city of Poznan. Bangladesh, speaking for the least developed countries, demanded that the opportunity of international migration for climate change victims should be included in the new global climate deal under discussion.

Raja Devasish Roy, the chief of the Bangladesh delegation, said world leaders should come up with a solution for those who will be forced from their homes. Other vulnerable countries supported Bangladesh’s proposals.

At present there is no international law to protect the rights of people like Jalil. UNHCR, the United Nations refugee agency, does not recognise climate or environment refugees, as they are not listed under the UN’s 1951 Refugee Convention. Now some experts suggest the Convention should be amended to allow for environmental displacement.

Future Floods of Refugees, a report by the Norwegian Refugee Council, advocates a new and separate international convention to protect the rights of climate refugees. It has also recommended a new international environment migration fund with contributions from industrialised nations under what it calls “the polluter pays” principle.

Already, according to the UN’s Intergovernmental Panel on Climate Change, there are around 25 m climate refugees, while there could be as many as 150 m by 2050. Jalil, Nasu Mia and their families are in a very long queue.