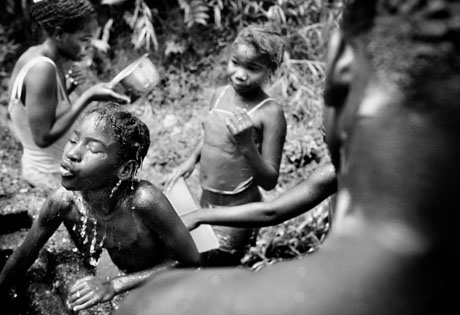 Children in Colombia playing with water; areas of the country are suffering from serious water scarcity / Espen Rasmussen - Panos pictures

Colombia’s indigenous peoples are working together to create an adaptation plan against climate change, which will bring together their own traditional knowledge with outside help from other agencies.

“It is better to die fighting in a war than to die from thirst”, says Walter Peña as he walks on the stones at the bottom of a dry stream after six rainless months in the department of Cauca, part of the Macizo Colombiano, a mountainous region in Colombia’s south-west.

Walter, a peasant from the region, has not seen a drought like this in almost 30 years. People who live some distance from the rivers usually transfer river water to their houses via small open water channels. But the recent drought has caused the channels to develop large cracks and the water doesn’t reach their houses any more.

The dry season also brings a wind blowing in every direction, drying every plant in its path. “This didn’t happen before. With this situation, there is no way to protect any plantation. This is all crazy, some water springs are gone,” adds Walter.

Something similar is happening to the indigenous communities living in the area, home to seven ethnic groups. During the last 10 years José Domingo Caldón, a leader of the Kokonuco Indian community, has seen the dry and rainy seasons getting longer every year.

Before, he says, the indigenous authorities could predict winter and summer time, as well as the best time to cultivate, “They used to ask Nature’s permission”.

Now the weather changes from one day to the next and people can no longer predict what is going to happen tomorrow or when the best time will be to cultivate or harvest. The old authority figures are dying and taking their knowledge with them, and the young people are not maintaining it. As they integrate into Western society they leave behind their customs and stop believing in traditions and ancient wisdom

“Now people are cultivating anywhere and at any time. This is greatly affecting the socio-economic situation of the community as many crops have been damaged”, Jose Domingo laments. “It is the responsibility of humans for not respecting the environment”, he adds.

He knows his people cannot remain inactive in the face of this situation.

That is why his community and four other Indian communities (Poblazón, Quintana, Puracé, Paletará and Kokonuco) have joined forces. They are developing an adaptation plan to reduce their vulnerability to climate change.

Supporting them are two peasant associations, Asoproquintana and Asocampo, with the help of the Spanish Agency for International Development Cooperation (AECID), alongside four agencies of the United Nations (UNDP, FAO, UNICEF and PAHO, the Panamerican Health Organization) and some local authorities.

It is the first time that four UN agencies have worked together on a joint climate change project, with the aim of using the results to develop a national climate change policy.

The plan includes water resources management, the conservation of the environment, and health protection, all within the framework of the Millennium Development Goals. The agencies have already identified several traditional practices that may be useful for adaptation programmes.

Manuel Mompotes, former Governor of the Puracé community and a local leader of the project, believes that one of the strengths of the indigenous peoples is their custom of meeting and discussing problems. Community meetings where leaders take collective decisions and exercise justice in the Indian way are for them a tradition.

“With this strength we can get the active participation of the communities, raise awareness and achieve goals in adaptation”, says Mompotes. And through these meetings, he says, the participants can also create early warning systems.

UN officials say trueque (bartering) is another traditional activity which can help people adapt to climate change. Bartering events, which unite people from different ethnic groups and also peasants, take place every two months in different parts of the region. “It is the place to exchange information and to create links between people living in different climatic zones”, says Luis Sanchez, from the UN’s Food and Agricultural Organisation.

He points out that bartering also makes a contribution to food security because people exchange goods from different zones, helping to supplement diets.

The Kokonuco community, for example, has often moved in search of new settlements. When the community resettles, it brings seeds which it has learned to protect and to adapt in the right mixtures to new climates. Now the different families are spreading the seeds of best quality to ensure food security. “This is autonomous community knowledge and it is a strategy to face climate change”, José Domingo says.

Harmful traditions to be tackled

But not every traditional practice is beneficial for the environment.

Burning the ground during droughts to prepare the soil for planting is something indigenous people have done for years. But the practice is condemned by environmentalists because it destroys soil nutrients and is a threat to drainage basins so it becomes a threat to food security.

This practice is one reason why some ecologists think indigenous people pose as much of a threat to the environment as anyone else. What’s more, taking care of the environment may not be a priority for many people already dealing with conflict and natural disaster.

“As part of the project we will analyse what are the traditions that must be strengthened and which ones should be reconsidered to better adapt to climate change”, says Luis Sanchez, the FAO representative.

It is a challenge the UN project must address if it is to succeed.

Maria Valencia is a Colombian journalist who for the past five years has been working for El Tiempo newspaper. She wrote this article thanks to a fellowship with the Climate Change Media Partnership – an initiative of the Panos Network, Internews and the International Institute for Environment and Development (IIED).