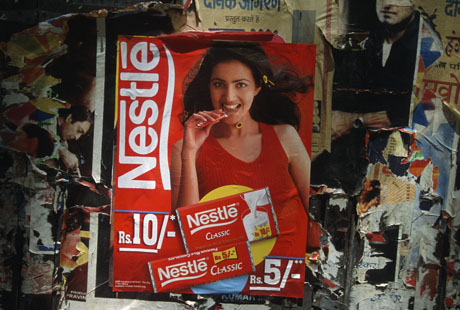 An advert for Nestlé in India. A new report suggests that commercial interests, rather than need, drives Nestlé's aid allocation / Mark Henley

A new report claims that Nestlé’s aid to developing countries is determined by commercial investments rather than poverty levels.

In 2007, Nestlé’s corporate aid amounted to US$55million. When measured in aid given per employee, this is equivalent to just over US$200 per person, which is slightly higher than Switzerland’s bilateral official development assistance (ODA), which in 2005 was US$190 per head of the Swiss population (a total of $1.4 billion).

Over the past few decades corporations have become an increasingly important source of aid but there is little information about how this aid is allocated according to the study. Using datasets from Nestlé detailing the amount of aid given, recipient countries and types of development projects funded, the researchers compared how Nestlé, non-governmental organisations and the Swiss government’s ODA allocate aid.

“Recipient need [measured as a level of per capita income] does not seem to play a decisive role in either the selection of countries or the amount of aid disbursed to them,” says one of the authors, Toman Omar Mahmoud, a junior research fellow at the Kiel Institute, Germany. “Commercial presence, however, is found to be the main driver of Nestlé’s aid activities”.

The allocation of aid is achieved in two steps: choosing the countries to which aid is granted and distributing the amount. Typically countries receiving aid have to have some institutional requirements to ensure that aid will be used effectively. However, the World Bank stresses that aid should not be commercially or politically motivated.

“By contrast ODA and NGO aid from Switzerland is clearly more poverty-orientated and not driven by commercial interest or institutional quality of recipient countries,” says Mr Mahmoud. However, the report notes that not all ODA adheres to the criteria outlined by the World Bank, with some official donors using ODA to promote exports to the recipient countries or “buy” political support. Aid from NGOs, meanwhile, has been known to be influenced by “policy agendas”, especially if the organisations depend on government refinancing, the report claims.

“Nestlé illustrates that the corporate aid of multinationals tend to favour recipient countries where these companies are present with foreign direct investment”, says Mr Mahmoud. “This comes at the cost of poverty orientation, as Nestlé’s subsidiaries are typically located in richer countries”.

Nestlé has financed projects in 50 low to middle income countries, whereas Swiss ODA targeted 150, according to the study, published by the World Development journal this month. In fact, Nestlé gives the lowest share of aid to low-income countries compared with Swiss ODA, Swiss NGOs and the Rockefeller and Soros foundations.

The bulk of Nestlé’s aid goes to East Asia and the Pacific (39.9 per cent of total aid) and Latin America and the Caribbean (29.8 per cent). Sub-Saharan Africa receives just 3.7 per cent.

“Sub-Saharan Africa in particular remains a [blind] spot for… corporate aid,” says Mr Mahmoud. “Thus, corporate aid activities may widen the gap between the haves and have-nots, rather than channelling resources where they are needed most,” he adds.

Comparing Nestlé’s global sales with aid distribution, the researchers found that the regions receiving the bulk of aid have a considerable share of Nestlé’s sales, suggesting that commercial and aid activities are strongly linked. “The overwhelming share of aid (97.4 per cent) goes to countries with local production in at least two branches,” the study claims.

The commercial influence in Nestlé’s aid allocation could be due to the fact that it uses its own subsidiary companies to implement development projects. According to the company’s 2008 Shared Values report, “Nestlé has been contributing to economic development over many decades, primarily through our work with farmers, and through 456 factories, half of which are in the developing world”.

Nestlé allocates aid through decentralised decision-making. This means that local employees, rather than those based in Nestlé’s headquarters, decide which development projects to implement. Nestlé believes that local partners have a better understanding of the specific needs and poverty issues in their areas.

However, the report argues that this approach makes it difficult to formulate a coherent poverty policy as the local partners act independently of Nestlé’s headquarters and other subsidiaries. The report suggests that if aid decisions were made under one roof, it would help create a well-defined strategy that would target aid more effectively.

“Centralisation with respect to overall aid budgets could help delink aid from commercial presence in the second step of aid allocation, while local staff, knowing better about specific need and poverty issues, may decide on which projects to spend the budget,” suggests Mr Mahmoud. “Centralisation might also help to discourage corrupt local governments who request aid in return for better business relations.”

The report suggests one way to delink commercial influence in the second step of aid allocation could be by outsourcing this step to completely independent foundations. The report argued this might overcome the commercial bias in Nestlé’s aid.

“With corporate aid becoming more important over time, current attempts at co-ordination among official donors fall short of designing a consistent strategy of targeting aid from different sources,” explains Mr Mahmoud. He adds that in order to bring about broader coordination between aid efforts of governments, NGOs and corporate donors, more transparency about sources of aid, and more information about what is determining where that aid is being spent, is needed.

Panos London contacted Nestlé for a comment but the company did not provide one. According to Nestlé’s 2008 Shared Values report, Nestlé follows codes of conduct outlined by the UN Global Compact. This compact aims to ensure businesses protect human rights, the environment, labour and anti-corruption in their work.