Communication leads to more equal roles in the home 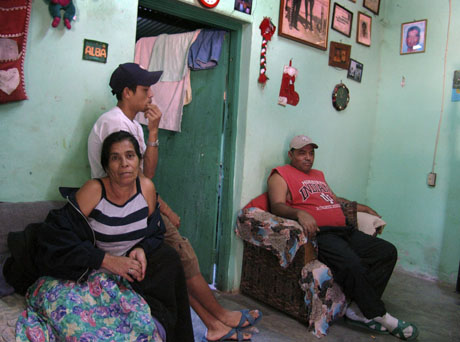 A family in their home in Honduras. A new education programme is helping women negotiate more equal roles in the home / Sean Sprague - Panos Pictures

An education programme focussing on communication skills is helping rural women in Honduras negotiate equal roles in the home, says a researcher.

The Sistema de Aprendiazje Tutorial (Tutorial Learning System or SAT) secondary education programme encourages students to discuss issues relating to their communities. According to a new report, the course is innovative as it “emphasises ongoing dialogue amongst students, helping them to develop their powers of expression and increasing gender consciousness”.

“Ensuring that education enables students to develop friendships, express their ideas clearly, negotiate with others and demonstrate care and concern towards others may help to tap the transformative potential of education, particularly to change household gender relations,” says the author, Erin Murphy-Graham, an assistant professor in International Education at New York University.

Juanita, one of the SAT students told researchers the programme improved her interpersonal skills with other members of the community as well as with her partner, Adan. Before SAT, she had found it difficult to express herself clearly. Adan said that they now talked to each other on a daily basis, suggesting this was an important aspect of their relationship.

The study, published in last month’s International Journal of Educational Development, argues that education programmes are often viewed simply as a route to get jobs in order to alleviate poverty. However, it argues that access to education does not necessarily change a woman’s status in the home. The author cites previous research on this issue such as a study by Arlie Russell Hochschild published in 1996. This study reveals that although women’s roles have dramatically changed in the public sphere, there have been far fewer changes in the home.

“Previous research has focused on the relationship between education and women’s empowerment in the public sphere. For example, participation in paid employment,” says Professor Murphy-Graham. “[Women’s] empowerment in the private sphere has been less developed in empirical studies,” she adds.

SAT was devised in the hope of addressing this problem by a Colombian NGO, FUNDAEC (Foundation for the Application and Teaching of the Sciences), in the early 1980s. It has since spread across the region. The Garifuna, an ethnic group, who live in rural areas in north-western region of Honduras were one of the first communities in the country to introduce SAT in the late 1990s. The programme is for both men and women, although the researcher focused on women’s experiences and explored how completing SAT had affected their roles in their households.

The qualitative report is based on several interviews carried out over the course of five years with 12 women who participated in SAT and a control group of women. Prof Murphy-Graham also included more than 200 hours of observation of the four rural Garifuna communities.

Prof Murphy-Graham found that the vast majority of people in the area lived below the poverty line. The main source of income comes from fishing, which is carried out by men, while women work in subsistence agriculture. As women do not participate in fishing, they have very little access to a cash income and depend heavily on the earnings of male partners or relatives.

Men also need to be involved

Improving women’s interpersonal and communication skills alone, does not automatically result in equality in the home, the report found – men must also be willing to engage in dialogue.

Juanita, who participated in the study, said that she and her husband Adan shared chores in the home but that this was not the norm amongst their peers. Juanita told Prof Murphy-Graham: “Many men are machista… they don’t help with anything, but the one I am with helps with everything.”

Juanita had shared what she learnt from SAT with her husband Adan, who told researchers: “I like that she has studied because over time she can help me. I am fighting for a better life. I won’t get in the way of her studying… If I can’t do something she can help me.”

According to the report, the degree to which women who had completed SAT had negotiated equal gender roles within the house varied. Nevertheless, it concluded that opening up communication lines between the couples is an important step in the right direction.

Title: And when she comes home? Education and women’s empowerment in intimate relationships