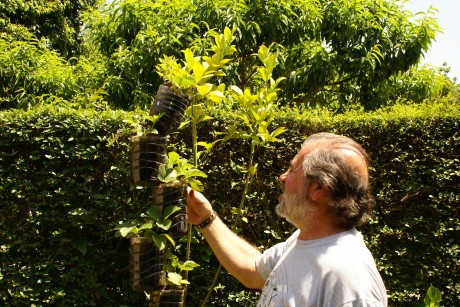 Mario Benito walks into his allotment with a smile. At home he has been making a device to keep bugs away from his vegetables and he is about to try it out. Made from old plastic bottles, sliced to create a fan, it is just what he needs to protect his new basil and tomato seedlings.

Benito, 55, has tended this patch for seven years, growing a wide assortment of vegetables and herbs such as basil, thyme, courgettes and peppers.

Around six metres squared, his plot is part of a much larger community garden, or orchard as it is known, which is part of Argentina’s national Pro Huerta (“pro orchard”) programme.

Here, Benito and around 20 of his neighbours grow their own food, exchange seeds and grow seedlings, plants, spices and vegetables to sell at local fairs. Each family or group receives one or more plots to work, depending on the number of members they have. They plant whatever vegetables and herbs they desire, and keep the harvest for themselves.

Growing your own vegetables is not unusual but what sets Pro Huerta apart is the scale. There are 589,000 orchards and 160,000 farms (where families are taught and encouraged to breed animals, such as chickens and rabbits, for consumption) across Argentina, feeding more than 3.3 million people.

Like most Argentines older than 30, Benito remembers the great hyperinflation crisis of the late 80s and early 90s. Food prices rose almost every day, leading to supermarket lootings and the percentage of people living below the poverty line in and around Buenos Aires jumped from 20 per cent to almost 40 per cent. From 1988 to 1991 the “basic food basket”, a measure of consumer food prices based on the minimum a person need spend on food per day to cover their basic alimentary needs, rose almost 3,000 times.

The Pro Huerta programme was created in the midst of this crisis to increase the access of the underprivileged to fresh fruit and vegetables. Although the crisis is long-gone, the programme continues to grow. 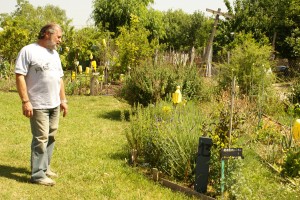 Benito used to run a food store, but he was injured when armed robbers broke into the shop. He took an office job with the city council – a safer option but on a third of his old income. “When I closed my store, I feared I would not be able to feed my family,” says Benito. So he enrolled in Pro Huerta in order to become more self-sufficient.

Since 2003 the programme has been part of Argentina’s National Food Security Plan. Created by the National Institute of Agricultural Technology (INTA), the project has been replicated in Brazil, Colombia, Guatemala and Venezuela, as well as in Haiti where some of the 11,000 small plots managed to survive the devastating earthquake in 2010.

The Pro Huerta plots comes in different sizes and are are aimed at groups of gardeners in urban, peri-urban and rural areas, including indigenous and peasant communities, neighbours, small farmers, landless rural workers and community institutions.

In the metropolitan area of Buenos Aires, home to more than 8 million people, there are currently 56,000 family orchards providing food to approximately 350,000 people, explains Juan Jose Zabalo, programme coordinator for the area. There are also more than 900 school orchards and more than 500 community orchards (areas of more than 200 square metres) where neighbours and community members grow their vegetables in a common area. In 2011, the Argentine state pledged more than US$10 million to strengthen and expand the programme.

To enroll in the Pro Huerta programme members must undergo training courses on orchard management and pest control. “Once they acquire the knowledge needed we give them a seed kit,” explains Zabalo. The kit contains 14 types of seeds: seven for the spring-summer period, such as tomato, sweetcorn and pumpkin, and seven for autumn-winter, including onions and celery. The state covers all costs and provides workshops for people to start their own initiatives.

“At first when you start the Pro Huerta programme you don’t know what to do,” Benito says. He explains that over time people become more familiar with the cultivation and growing of vegetables, which in most cases they have never done before in their lives. ”You save money by being self-sufficient”, he says. “Most of us haven’t bought a single spice or lettuce from the grocery store since we started here.” In a small, well-organised family orchard a four-member family can grow enough vegetables to save up to 200 pesos per month (US$43).

To make a bit of extra money, Benito, along with some other families, grows seedlings to sell at local food fairs. They offer basil, peppers, mint, tomatoes and parsley, depending on the season, at 2.5 Argentine pesos per seedling (a little over 50 US cents). They reinvest the profits to buy different seeds and improve the facilities at the plot. Recently they built two sheds and bought canvas to protect plants that are more sensitive to the sun.

The Pro Huerta programme is organic and during the training programme participants learn different natural method to control pests and insects without pesticides, including using particular flowers and aromatic herbs planted among the fruit and vegetables.

No fertilisers or pesticides are used. Instead, traditional techniques have been reinstated and updated to optimise yields.

Surplus grown on larger gardens and farms was designed to be sold commercially. Fairs are organised in different towns and neighbourhoods once a week or every two weeks, where people can buy organic products from regional producers. Initially people were skeptical about organic produce – the vegetables are not uniform in shape and size and because they are not grown on a commercial scale they are more expensive than those in supermarkets. However, the fairs have become well known in their regions and play a substantial role in healthy food supply.

But Pro Huerta is not only about “using available land and time to produce healthy food,” says Zabalo. Self-sustainability, community involvement and family production are some of the outcomes of the programme, which has nurtured a different approach to food consumption. “It’s not just the production of vegetables but also a cultural process that is progressing”, Zabalo concludes.

Back at his vegetable plot, Benito is quietly satisfied. The insect trap he made, smeared with a sticky oil, has entrapped a host of bugs and flies and the rattling noise it makes has kept the birds away. His seedlings are growing nicely and it looks as though this season’s vegetables will be a bumper crop.

With food prices rising around the globe, more people want to grow their own fruit and vegetables. Ana Bell reports on an urban gardening scheme in Argentina that feeds more than 3.3 million people.