You are here: Home » Blogs & features » Print features » Computers that speak your language

Computers that speak your language 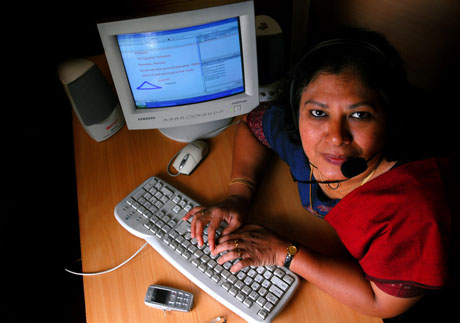 One billion people use the internet – another five billion don’t. Will getting more local languages online make much difference?

At the Government Girls High School in Ernakulam in Kerala, southern India, students of Classes 9 and 10 are taking their half-yearly practical tests in computer science. In a nearby room, which serves as the district’s resource centre for training teachers in computer skills, the screens are almost all in English, even though the first language of most people is Malayalam.

“We have a full set of Malayalam-language packages, but the students hardly ever use them,” says Mrs Sushama the local coordinator. “Most kids have picked up enough English and they invariably prefer to use the English browser.”

In a nation where English is synonymous with global opportunity in information technology, language is not necessarily the biggest barrier for those who are young, well-trained or inquisitive enough.

Kerala’s kids don’t seem to find the internet’s ‘default’ English language interfaces too much of a barrier, but that is not true of many others. In fact contrary to popular perceptions of India as an Anglophone country, more than 700 million (three-quarters of the population) do not speak English.

Kerala’s state government was conscious of the need to address language barriers when it made the internet a central tool of its rural literacy drive a decade ago. They launched Malayalam language browsers, word processors and local language clones of voice-over-internet telephony such as Skype. Spurred on by demand, there is even an open-source Malayalam language version of Wikipedia.

At the age of 82, Mohammed Kutty Haji underwent a basic e-literacy course at the local Akshaya centre in Kadampuzha village. He took a module to help him use features like email and internet telephony. “I come here every week or whenever I feel like talking to my son in Abu Dhabi,” he says.”What’s more I can see him while talking.”

Like many families in Kerala, his son has left to earn a living in the Persian Gulf. All of a sudden rare and costly international telephone calls were replaced by ‘instant mail’ in a language he understands.

When the government-run Centre for Development of Advanced Computing (CDAC) in Pune, Maharashtra state, helped to create a web-based resource where users can download any of 10 Indian languages, it handled more than a million requests in its first year. Sheer business potential has drawn global Web companies like Google, Yahoo and AOL, to invest in research to create Indian language computing interfaces with free desktop tools.

Despite such innovations, the internet still poses inherent problems for those whose first language is a non-Roman script. It is still not possible to register a website address – such as www.panos.org – in Hindi, Tamil, Arabic, or Chinese or indeed any in any script except the Roman alphabet. The’top level’ domain name, familiar to most of us as the .org or .com we type into the web address bar has to be written in Roman letters. Even though email content may be written in a local script such as Hindi, Tamil or Amharic, email addresses cannot.

Civil society organisations and governments from developing countries have argued potential users find it offputting to deal with even a small amount of a foreign script and as a result, their opportunities to participate in the information society are constrained.

This particular barrier, however, could change. The US-based body that allocates all domain names – the Internet Corporation for Assigned Names and Numbers (ICANN) – is running tests to see whether it will offer entire domain names in non-Roman alphabets, so-called internationalised domain names (IDNs).

“The main reason for introducing internationalised domain names was to allow people across the world to use domain names in their local languages,” says Tina Dam, director of the IDN programme at ICANN.

On ICANN’s test sites, a whole website address (or URL) can be written using one of 11 non-Roman scripts, including Arabic, Korean and two Indian languages- Hindi and Tamil. The online standardisation of non-Roman scripts could provide other opportunities too, such as attracting local language advertising via an approved internet service provider. When the trial was launched in October 2007, the Egyptian government said it could be key to getting the next 10 per cent of its population online.

ICANN says it will decide whether to take forward these trial IDNs depending on demand. Linguistic standards also have to be agreed which can be difficult as official language authorities do not always exist and, in any case, many languages cross national boundaries.

Of course, language is only one barrier to getting online for the less privileged. In many African countries, for example, the cost of going online is astronomically expensive.

Mike Jensen, an independent ICT consultant and advisor to the International Development Research Centre and the Bill and Melinda Gates Foundation says:” For the majority of users in Africa increasing international bandwidth and decreasing the costs of building infrastructure are still the biggest issues. Internationalised domain names will be a more serious issue in more developed countries, such as Brazil, South Africa and India, where more people on low incomes but with no foreign language skills have access to the internet.”

In India, rural infrastructure is also an obstacle, and as a result the mobile phone is emerging as a competitor to the PC. About eight million mobile handsets are bought every month, taking the total number of cellular subscribers today to just under 250 million in a nation of more than a billion. Some 40 million of these phones are internet-enabled. In comparison, the number of PC-based internet connections stands at about 10 million. But language remains a challenge and the mobile phone market is working hard to attract rural users by offering services in local scripts. Motorola, for example is introducing a so-called’Hinglish’ keyboard interface that allows Indian languages to be entered in Roman script.

When Dr Vinton Cerf, ‘net evangelist’ for Google and regarded as one of the ‘fathers’ of the internet, visited India in 2007 he told reporters:” E-inclusion? Forget the PC. The mobile phone is what will matter from now on.”

If his prediction is right, the versatile cellphone might provide the means by which the next billion log onto a worldwide web where they can speak their own language.