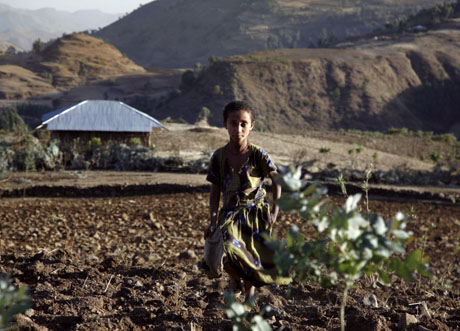 Ethiopia | A young girl stands in her family field in the hills of the Megech area, where deforestation and soil erosion are a conitinuing problem / Petterik Wiggers - Panos pics

Major donors including the US now acknowledge Sub-Saharan Africa needs investment in agriculture to beat food shortages. The policy was underlined at the G8 meeting in July and during the recent seven-nation tour of the continent made by US Secretary of State, Hillary Clinton.

Sub-Saharan Africa suffers greater food insecurity than anywhere in the world and climate change has exacerbated the problem. The effects of changing weather patterns are being felt acutely.. This month the US-funded Famine Early Warning System reported that farmers in the southern region of Ethiopia had managed to plant only 50 to 70 per cent of their crops because of the late rains. The outlook for people affected by food shortages is bleak with UNICEF estimating that 242,000 children aged under five in the region will need treatment for malnutrition.

In South Africa’s Limpopo Basin only 30 per cent of farmers have managed to do this. Researchers say the main hindrance is not farmers’ lack of knowledge, but their difficulty securing business loans. ‘Lack of access to credit was cited by respondents as the main factor inhibiting adaptation,’ writes the report’s author, Glwadys Aymone Gbetibouo who surveyed 794 farm households during the 2004-2005 farming season. Some of the policy recommendations in this paper are for the government to make access to affordable credit and promote efficient water use through pricing reforms and defining property rights.’

The study produced by the International Food Policy Research Institute is featured in a new climate change series, Joto Afrika (Swahili for Africa is feeling the heat) published by the Arid Lands Information Network (ALIN) in Kenya in partnership with AfricaAdapt and the UK’s Institute of Development Studies.

Joto Afrika aims to highlight problems of climate change in Africa and how to adapt through a series print briefings and online resources. – http://www.id21.org/publications/JA/JotoAfrikaIssue1.pdf

Understanding Farmers’ Perceptions and Adaptations to Climate Change and Variability: The Case of the Limpopo Basin, South Africa 2009 by Glwadys Aymone Gbetibouo is published by IFPRI, an organisation which offers sustainable solutions for offering hunger and poverty –  http://www.ifpri.org/pubs/dp/IFPRIDP00849.pdf