You are here: Home » Blogs & features » Print features » Cruelty and hunger in the desert

Cruelty and hunger in the desert 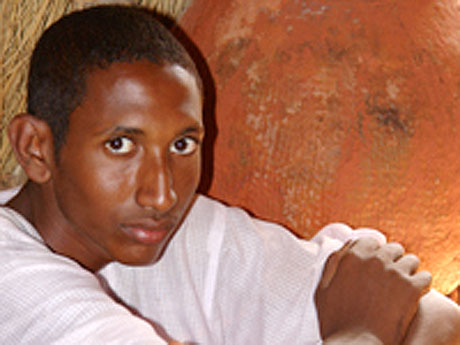 Sudan: Children have been robbed of their education by desertification

Increasing desertification has robbed Sudan’s villages of their pastures and children of their education. Usama Ahmed Al-Iman is one of many who has been forced to drop out of school.

“Keep your arms up!” The sound of a whip lashes through the air. “Don’t you hear, boy? Arms up!” The whip comes down on the back of 10-year-old Usama Ahmed Al-Iman. He moans with pain. How can he arrive on time for the morning assembly? How can he avoid being late in order to prevent being lashed in front of all the other pupils?

Usama had got up early in his village El Ihemrat when the first azan (call) announced the dawn prayers. He had nothing to eat because his family lost all its animals. The desert had devastated the village and its vegetation. He walked for nearly two hours to reach Maliha Primary School, but he got there late only to be whipped during the morning parade session.

The whip comes down again onto his back. Damn this village! What makes him bear all this suffering? He will return home at six in the evening, will take a brief rest and then start his school homework. He will go to sleep, and in the early morning it will be back to school. What is the use of all the suffering coupled with this heavy weight of poverty, desert sands and misfortune?

And then there are the education fees. They amount to 8,000 Sudanese pounds each year. His other brother went to school. His sisters are still at school. Life is difficult. His mother works as an office clerk to be able to cover their school expenses.

Usama’s mind races. “Is it reasonable to bear all that suffering for the sake of school education when I feel hungry, tired with an empty stomach and the reward is being whipped?” he thinks. “What do I lose if I drop out of school? Damn it! There is no justification for this suffering; there is no use in going to school!”

It is now seven years ago since Usama came to this conclusion. Seven years ago he left school for good. But as he settles down to tell his story, the memories come back as if it happened yesterday.

He left his village El Ihemrat, along with some of the village youth, to travel to Omdurman to look for work far away from home. They all wanted to help their families by sending money home. The situation in their village was deteriorating as the sand dunes crept closer.

“We once had animals who fed us,” Usama recalls. “There was agriculture around our village. An abundance of whatever we needed. But as the environment changed, rainfall became scarce, animals died. My mother could no longer support us. I had to help in covering the family’s living expenses.”

Usama can’t forget the time when his village was green and full of acacia trees and the pasture was rich. He still remembers the hakkama, the rural woman poet and singer, describing the village scene:

Greet Kaheela [cow with abundant milk] when she comes

The sound of Nura [cow grazing in pasture] when she bellows

The hay in the waterways is in heaps

All this is gone. Sand devastated their lives, forcing people to leave their village which was like a mother to everyone.

When he left his village with some 40,000 pounds in his pocket all those years ago, Usama started selling socks in Omdurman. He moved from one small job to another. Then he left for Port Sudan to establish himself as a vegetable seller.

He sometimes incurs losses and on some occasions the local authorities confiscate his vegetables. At times he doesn’t have enough money to replenish his stock and is unable to send any money to his family although he tries to send them between 150,000 and 200,000 pounds a month.

Usama admits that he has some good memories of his village school days. “I still remember the Thursdays”, he says, “when we used to play football inside the school premises. And although the school was built out of wood and hay, although we had to sit on the ground as there were no chairs and although we had no books, those Thursdays were a special time for us.”

Today, Usama is full of remorse. “I am now 17 years old”, he says. “I left school seven years ago, but I regret that. I wish I was a doctor and could heal people.” He would love to continue his education, he says, to become a doctor, build a mosque in the village and dig a new well, replacing the old one which is full of insects and filth.

Ajab Ibrahim Ismail is the director of elementary education in the Bara locality to which the village of El Ihemrat belongs. “El Ihemrat”, he explains, “is affected by the phenomena of desert creep, the advanced form of desertification”. People here, he says, now depend on pastoralism because agriculture is no longer an option.

Ajab Ibrahim Ismail is keen to point out that things have changed in education since Usama dropped out of school. He doesn’t like to talk about education fees, but prefers, instead, to call them a community contribution. It is a way, he points out, to involve the community in the effort to educate children and keep a school running.

“The amount is not fixed by the government”, he says, “but by local education councils”. Schools, he stresses, have clear instructions these days not to dismiss pupils who cannot pay these fees. And, he adds, teachers are instructed not to beat their pupils and are trained accordingly.

These days, he points out, effort is made to create an attractive school environment. Chairs are available, so are books and a school meal, sport is popular and pupils engage in activities such as planting seedlings for neem trees (Zadirachta indica) or other flowers for decoration.

Despite those efforts, some youngsters still drop out of school. Ajab Ibrahim acknowledges the problem. “The young who leave school to go to urban centres are seeking profits and quick income”, he says. “And sometimes it is the parents who put pressure on the children to leave school and help them in securing a living for the family.”

Everyday Usama asks himself: ‘What if a government official had come to our village?’ None of his peers finished education. They all migrated to the cities in search of work. Had an official come to their place to ask about their needs, they would have been unable to explain or put across their case.

But he believes that because of their lack of education they would have been unable to provide strong arguments; arguments that might have brought help to the village, and might have helped to combat the effects of the desert. He and his peers are determined to do their bit so that all village children will have access to education whatever the circumstances – so that El Ihemrat might see a better future after all.

Usama sees himself in every pupil carrying a schoolbag. He encourages them not to give up, to battle on despite the hardship, to challenge desert creep. He wants them to avoid making the decision to drop out of school that he made in the past, a decision which has left him without a future.