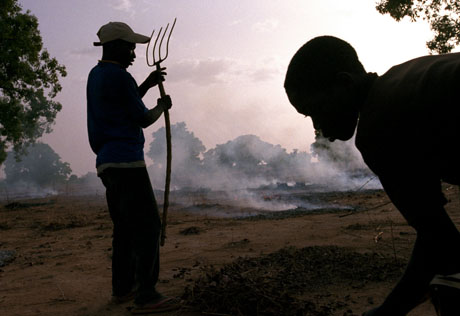 Burkina-Faso | Boys work in their field to prepare for planting. The area is seeing greater weather variablility, but different groups are responding to the changes in different ways / J.B. Russell - Panos pictures

Researchers believe cultural values are preventing certain ethnic groups in northern Burkina Faso from adapting to the impacts of climate change. A report published in this month’s Global Environment Change journal compares the responses of two ethnic groups, the Fulbe and the Rimaiibe, who live Biidi 2, a village in the north of the country, to climate change.

The study found that while both groups recognise the negative impacts of climate change, the Fulbe have not adapted as well as the Rimaiibe despite living in the same area.  By contrast Fulbe who live in other parts of the Sahel have adapted relatively well.

The study identified four of the most common livelihood strategies employed around the world to cope with climate change: labour migration, women’s economic activity, work in development projects and farming using ground-water supplies. According to the study, the Fulbe have rejected these strategies despite recognising their benefits.

“[Our findings] highlight an important aspect of climate change, namely that if climate change is indeed global, its impacts are always local,” says one of the authors, Jonas Østergaard Nielsen a PhD fellow at the Institute of Geology and Geography at the University of Copenhagen. “[The] local context may vary even within a small region and between villages,” he adds.

The African Sahel, a semi arid region of western and north-central Africa, provides “one of the most dramatic examples of worldwide climatic variability that has been directly and quantitively measured”, the report claims. The researchers found that both the Fulbe and the Rimaiibe say rainfall is less predictable today than 40 years ago, making it increasingly difficult to know when to plant crops.

The researchers collected data over a six-month period through interviews, questionnaires and focus groups, asking questions about income, farm size and changes in weather patterns over the last fifty years.

“Social norms, values and rules play a large role when local people around the world choose which livelihood strategies to embrace in the face of climate [change],” says Mr Østergaard Nielsen.

Relationship between the groups holds the key

Before the practice of slavery was fully banned in Burkina Faso in 1983, the Rimaiibe were the Fulbe’s slaves. According to the report, the Rimaiibe were engaged in a form of indentured labour and did much of the agricultural work on behalf of the Fulbe, creating a clear demarcation of work between the two ethnic groups.

The Fulbe told researchers that the Rimaiibe “are black, short, physically strong – appropriate for bending over and working hard in the sun” and therefore suited to hard labour. The researchers found that labour migration was deemed “beneath Fulbe and shameful (semteende)” and that the Fulbe consider the manual labour that the Rimaiibe carry out as “non-Fulbe”.

Traditionally, the Fulbe and their cattle migrated to higher ground after the agriculture season in the village – a practice known as transhumance. According to the study the Fulbe continue to do this even though it is not relevant as a way of adapting to climate change.

By contrast during the droughts of the 1970s, the Rimaiibe adopted a tradition of migrating for work to Abidjan in Cote d’Ivoire, enabling them to bring back money to the village to feed their families as well as pay for social obligations such as weddings.

“A lot of identity and culture is hinged upon what you do [and] what you work with. This is also true for [the] Fulbe”, explains Mr Østergaard Nielsen. “Changing profession is really not so simple and especially not when it is so closely associated with an ethnic identity as it is in Biidi 2”.

Labour migration entails “back-breaking” work, according to the study. However, on average, the Rimaiibe men return to the village after six months with $200 to $300. As a result, the Rimaiibe are now better off in monetary terms than the Fulbe, the study claims.

“At the moment it is hard for [the] Fulbe because the strategies available really challenge their identity, how they see themselves,” says Mr Østergaard Nielsen. “But Fulbe culture has been through other challenges and survived,” he adds.

According to the report, the Fulbe continue to bring their cattle to higher ground rather than go to Abijan to work even though it is not as economically advantageous because transhumance is an important part of Fulbe identity. One Fulbe man told researchers: “We like it; it is pulaade [to act like a Fulbe]”.

Cattle rearing, personal freedom and independence are the characteristics that the Fulbe associate their identity with, the study found. Therefore the current strategies available to adapt to climate change conflict with Fulbe identity.

“[The research] emphasises that we need to take into account ‘soft’ values like culture and identity when looking at potential adaptation strategies,” Mr Østergaard Nielsen concludes.