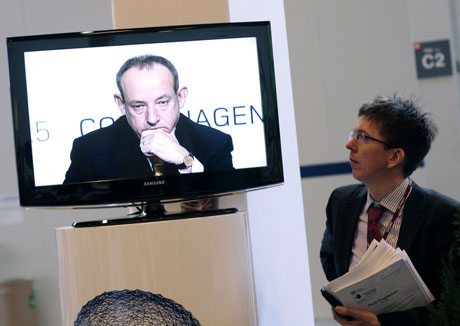 UN climate chief Yvo de Boer being watched on a TV in the conference centre during the UN summit on climate change (COP15), December 2009. He is now standing down from the position / Fredrik Naumann - Panos pictures

The race for the UN’s top climate change post is heating up with calls for it to go to a candidate from a developing country. Costa Rica put its hat into the ring this week, nominating its lead climate change negotiator Christiana Figueres to succeed Yvo de Boer. Alongside South Africa, other frontrunners include India and Indonesia. Environmental journalists Pierre Fitter in Delhi and Harry Surjadi in Jakarta weigh up their chances.

Indonesia’s president Susilo Bambang Yudhoyono recently returned from talks in Australia, where alongside topics such as people smuggling and terrorism was another pressing issue: climate change. A fortnight ago the two countries signed a US$27 million deal to tackle deforestation on the island of Sumatra – a key problem in Indonesia where 80 per cent of emissions come from deforestation, both by legal and illegal loggers.

But while climate change might make it onto a global political platform, back home it means almost nothing to the average Indonesian.

Indonesia has so far expressed interest in submitting a candidate but when the news broke it made little impression on the local media. So far only three national newspapers have covered the story, two of which are English language publications. In this case environment reporters had to push the story onto the agenda, calling up experts to ask their opinions on potential candidates. Meanwhile, the vernacular media rarely covers climate change issues at all.

Opinion remains divided over who will be chosen. Emil Salim, a member of the Advisory Council to President Yudhyono and Indonesia’s first environment minister, is considered a frontrunner as a result of his international track record and his role in developing the country’s first environmental laws. He is also seen to be equally tough on developed and developing nations, expecting both sides to pull their weight when it comes to lowering emissions. Meanwhile, the Jakarta Post claims the three most likely candidates are former foreign minister Nur Hassan Wirajuda, Agus Purnomo, head of the National Council on Climate Change and a special staff member to the president on climate issues and Liana Bratasida, deputy environment minister.

Beyond a small number of environment journalists, climate change is not a priority for either the media or the public. The media is more interested in politics than climate change and a key issue for both the public and the media is corruption.There is agreement among Indonesia’s few dedicated environment journalists that it is time to appoint a developing world candidate to the UNFCCC. Ideally it would be someone with a character strong enough to bridge the divide between the views of developed and developing countries.

Indonesia would be a good choice. It is a developing country that manages most of the time to strike a middle ground. An Indonesian at the helm of the UNFCCC, for instance, would find less resistance from both developing countries (such as the G77 and China) and from developed countries such as the US and Australia, one of its key allies.

Indonesia also showed strong leadership when it hosted UN talks in Bali in 2007. However, its delegations took more of a back seat in Poznan and Copenhagen. If Indonesia gets this opportunity, most environmental journalists believe Indonesian can play bigger role in bridging and finding a resolution for the current deadlock in climate change negotiations.

Climate change is important to the government in so far as it has pledged to cut emissions by 26 per cent by 2020. But in reality, the most important thing for Indonesia is how to reduce poverty and achieve the Millennium Development Goals.

When the news broke that Yvo de Boer was standing down from his post at the head of the UN’s Framework Convention on Climate Change, India was the first country to offer up a candidate for the role.

The candidate is Vijay Sharma, India’s environment secretary. According to local media, Jairam Ramesh, the country’s environment minister, has said India has China’s support for the bid. Sharma would “provide a bridge between developing and developed worlds”, he added.

A bridge is just what is needed right now as when it comes to climate change on a global stage there is a trust deficit in the negotiating room. Yvo de Boer, the outgoing UN climate chief, did a respectable job. His stewardship gave us the Bali road map and, to some extent, the Copenhagen Accord. But attempts by rich countries last year to kill the Kyoto Protocol – the only treaty that guarantees penalties if countries don’t act to stop climate change -angered developing countries. Denmark’s prime minister Lars Lokke Rasmussen didn’t help matters when he tried to bulldoze through the so-called ‘Danish draft’ at the Copenhagen Summit last December.

Many Indians decry what they see as attempts by the rich Western world to keep us locked in a cycle of poverty: “Sorry, you can’t use cheap coal like we did, but we’re not going to give you the money or technology to clean up your act either.” They fear that if the West forces India to cut emissions, the increased costs of things like clean energy would bury us in debt.

Energy, clean or otherwise, is a highly contentious issue in India. Even thinking of increasing energy costs, for example, is tantamount to political suicide. Just ask India’s ruling United Progressive Alliance. The coalition government’s proposed annual budget now stands on shaky ground after a proposal to raise fuel prices by just a few rupees. With Indian wallets already struggling under the strain of food price inflation, which has remained above 15 per cent for months, there was public outcry.

So when news broke that Yvo de Boer was stepping down, the Indian government saw it as a chance to get its voice heard. Jairam Ramesh has been reported in local media as saying Sharma’s appointment would reflect “India’s importance in climate change negotiations”.

Sharma makes for an interesting political choice. Brazil, South Africa, India and China emerged as the single most powerful bloc in the Copenhagen climate change talks last December. South Africa has also nominated its own candidate Marthinus Van Schalkwyk. The hope is that by putting an Indian or South African candidate at the helm of the UN’s climate negotiations process, the balance would shift in favour of developing countries. While that’s not entirely true (the executive secretary answers directly to Ban ki-Moon, not his or her home government) at least developing countries will get a sense of security that they will be heard.

The Indian media has not given the race as much coverage as you might expect, considering climate change is now a hot topic. Perhaps it is because they have low expectations for Sharma winning the race. Ironically, China’s support could end up being the major handicap. After all, both India and China are demanding the extension of the Kyoto protocol, which does not require them to cut any carbon emissions. US lawmakers believe this is an unfair deal, especially as China and India are now the largest and fourth-largest emitters of carbon, respectively. Having “their man” lead the negotiations and dictate terms to US diplomats would not sit well in Washington.

The US remains the 800-pound gorilla in the fight although its authority is now being challenged by the four 600-pound gorillas of the BASIC group. As secretary general of the UN and the man who will pick the successful candidate, Ban ki-Moon finds himself in the middle of the fight. In order to keep both sides happy he will probably be forced to pick a compromise candidate. As a result, not many people in the Indian media believe the post will go to an Indian.