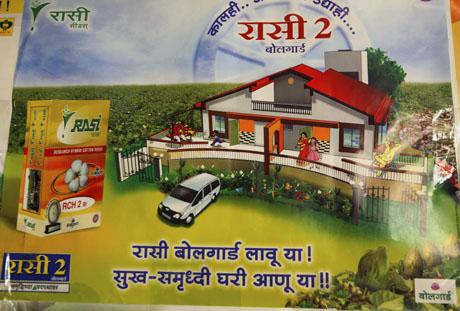 India | A poster in a seed shop advertises GM cotton seeds. Other genetically modified seeds haven't been so lucky, with a strain of GM aubergine the latest to be denied permission to be planted / G.M.B. Akash - Panos pictures

Last week India halted the commercial release of the world’s first genetically modified aubergine, or brinjal as it is known locally. While public interest has been hailed as the reason for sending the vegetable into cold storage, Pierre Fitter says if you dig below the surface you’ll find it’s all about state politics.

Beginning this January, India’s environment minister Jairam Ramesh chaired seven public meetings across the country attended by nearly 10,000 people. In the blue corner, supporting Bt brinjal, were dozens of scientists and bio-tech companies, who study and develop GM foods. In the red (or perhaps “green”) corner, were international and local environmental NGOs, from Greenpeace to local-self help groups and farmers, all of whom instinctively oppose anything remotely related to GM.

After listening to both sides, Ramesh announced a “moratorium” on Bt brinjal. He says he took his decision because he saw no “consensus” between the warring factions and believes more research should be carried out to prove it is safe.

In a letter released last week Ramesh wrote extensively about the huge opposition he faced from civil society over Bt brinjal. But one sentence hidden in those 19 pages has received almost no coverage: “When there is so much opposition from the state governments…”

Sixty per cent of India’s brinjals are grown in just three states – Bihar, Orissa and West Bengal. All three are ruled by parties that oppose Ramesh’s own Congress party in parliament; and all three said they wouldn’t allow Bt brinjal – which contains an in-built pesticide gene –  to grow on their soil. They were joined by Kerala, Chhattisgarh and Karnataka – again all ruled by opposition parties.

So, if Ramesh’s Congress party was to stand any chance of returning to power in these states, angering farmers who make up most of the electorate wasn’t a good idea. The state governments, by turn, publicly opposed Bt brinjal to keep their voters happy.

But the final nail in Bt brinjal’s coffin wasn’t hammered in by the opposition. It came from Andhra Pradesh, a Congress-run state. In a letter to Ramesh, the state government wrote: “Until safety parameters… are clearly established, [the] release of Bt Brinjal for commercial cultivation is to be deferred.”

One of the reasons opposition to Bt brinjal has been so vehement comes from India’s rocky relationship with GM in the past. Bt cotton, the only transgenic crop under commercial cultivation in the country, has a controversial history since its introduction in 2002. The GM seeds have helped increase productivity in some areas but they are more expensive, leaving some farmers in debt and has therefore been blamed for many of India’s thousands of farmer suicides. It does not help that Monsanto, the company behind Bt cotton, has contributed to the development of Bt brinjal through a 26 percent stake in Indian seed and biotech company Mahyco, which developed it.

To India’s farmers – many of whom are small-holder, subsistence farmers – signing up to Bt brinjal would mean passing some control of India’s food production to a powerful multi-national company.

Farmers therefore simply don’t trust the crop. And with more than 50 per cent of the population relying directly on agriculture for their livelihood, India’s farmers carry a significant amount of voting power.

While the science around Bt brinjal has been debated endlessly, no one can deny that politics has played a major role.

What is also clear is that this is just round one. Barely a week after the announcement, India’s Science and Technology minister Prithviraj Chavan has once again raised the issue, declaring Bt brinjal “100 per cent safe”. So expect the debate to resume later this year when a government panel goes back to studying the crop all over again. Environment activists say they are ready to take their protest forward. GM advocates, including Monsanto and local unit Mahyco – which, incidentally, is developing a further 17 crops including Bt wheat, sunflower, tomato and cabbage – are no doubt also preparing their arsenal for when the fighting resumes.

Pierre Fitter is based in Delhi and reports on the environment and foreign affairs.