You are here: Home » Blogs & features » Print features » Don’t give up the fight…

Don’t give up the fight… 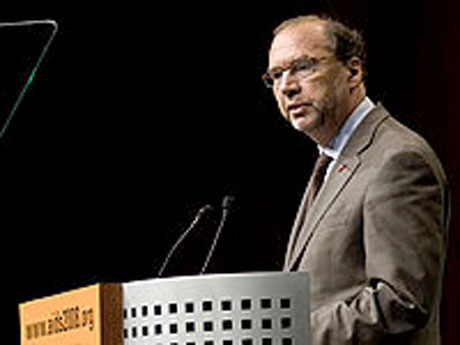 However all of this is taking place in a fast changing environment. “Our challenge today is to position AIDS in this context – to sustain and build on the gains we’ve made while ensuring that due attention is paid to other major issues,” Dr Piot stated.

He said almost three times as many people become newly infected with HIV as those who start taking antiretroviral treatment. “HIV infections are rising in some countries where we thought prevention had been successful.

And new epidemics are appearing for example among men having sex with men in many Asian cities, in drug users in parts of Africa. Let’s never forget that the epidemic could still bring us new surprises as it has done so many times already.”

He lashed out at critics who claimed, that “we just need one or two things to prevent HIV”, and called for involvement of communities in HIV strategies. “Combination prevention, just like combination treatment is the only feasible option. Anything else is frankly irresponsible.”

Dr Piot said combination prevention involved mobilising for social change around areas such as stigma around HIV, gender based violence and ostracism of sex workers.

He also called for bold leadership on HIV and AIDS which he said is crucial to HIV prevention because it means tackling many controversial and often deep-rooted beliefs. “One of the main lessons of providing antiretroviral therapy to millions of people is that we should not wait until systems are fixed before acting, because I know what would have happened to the three million people on ART today if we had: most would be dead,” he said.

He urged world leaders to strengthen health systems so that they can provide treatment for people living with HIV for decades to come. And with the devastating impact of the twin epidemics of HIV and tuberculosis, Dr Piot called for the strengthening of partnerships among those working in the field of TB.