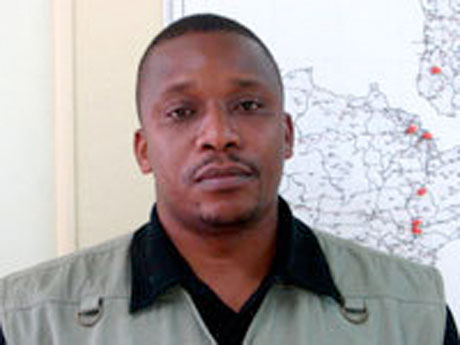 Steve Belemu is breaking down the taboos around TB / Rose Tembo

Fear and falsehood about the causes of TB are rife. In Zambia it’s a full-time job to set the story straight.

Steve Belemu stands in front of 28 people telling them why they are wrong about tuberculosis. His audience of 12 men and 16 women is sitting on plastic garden chairs in a light-filled conference room in Kabwe, the capital of Zambia’s Central Province.

Steve’s job at the Zambia AIDS-related Tuberculosis Project (Zambart), an independent NGO at the University of Zambia, is to reduce the stigma that surrounds the illness.

“What does this say to you?” he asks, holding up a picture in which a group of people are watching television in a living room. Someone points out that the person who is sick has been isolated. Steve then outlines other situations in which people who have TB might be excluded and invites the group to share their experiences.

One participant, Lucy, a 36-year-old mother, was successfully treated in 2003: “I was called names even by many members of my family,” she remembers. “After four months of treatment I fell pregnant and the people of my community gossiped that my child would not survive. Now I understand it was because of my poor immunity that my body could not fight the TB germ.”

Zambart has organised today’s session because it worries that the stigma associated with tuberculosis is getting worse. Tuberculosis has long been seen as an illness that thrives in poor communities, and few people are willing to be associated with poverty. Some church organisations even regard it as a curse. But Zambart suspects it is the association between TB and the HIV virus which is making the negative associations so hard to shift.

Many people living with HIV have weakened immune systems and this makes them vulnerable to TB infection. As a result the two conditions have become intertwined in the minds of the public.

Virginia Bond at Zambart and Laura Nyblade published an influential study in 2006, looking at this phenomenon in Zambia and other countries with a high prevalence of HIV. They found the link between TB and HIV has propagated popular misconceptions, including the belief that all people with TB are also HIV positive and that TB is incurable in people living with HIV.

At the Kabwe training session, there is clearly some confusion about how the illness is transmitted. “Has anyone in here seen someone get TB as a result of sleeping with a woman who is having her menstrual periods?” asks Steve. A number of hands go up and a woman who looks around 40 years old answers, “With my own two eyes I have seen a man getting so thin for sleeping with a woman who is having her periods.” Another man, the eldest participant, agrees. He too has seen a lot of young men infected after having sex.

Steve then asks the male participants, “Who has never had sex with a woman having their monthly periods?” This time no hands go up. After establishing that TB has nothing to do with menstruation, Steve tells them TB transmission is airborne: “It is caused by a TB germ,” he explains.

“Fighting TB stigma has become personal to me as an individual who has lost loved ones,” says Steve. “Why? In most cases there is late detection of the disease because they have gone late for diagnosis or they have been delayed by the complications that come when one is HIV positive. I have seen people who have died and some of them very close to me.”

Zukas, who lives in Lusaka, worried he would die after being diagnosed with TB at a government hospital. “My first reaction was not to believe the doctor and I opted to visit a private clinic where it was confirmed, but I lived in denial and waited for death,” he says. His family encouraged him to get treatment but his fiancée ended their relationship.

The notion that TB is linked with immorality also caused him problems, “My friends would ridicule me and make fun of me and assert that the disease was a result of being promiscuous. This resulted in me not being free enough to cough and be myself.”

Efforts within the health system to tackle HIV and TB together may be unwittingly contributing to this stigma. Steve says newly diagnosed TB patients often complain when they are then referred for voluntary counselling and testing for HIV.

“We know that there are many benefits in taking an HIV test if one is found with TB, but the general perception is that it brings out the stigma, he says. “People are labelled unofficially to be HIV positive and there is a fear that TB is not treatable.”

Treatment is often carried out in clearly demarcated areas within health centres, known as TB corners, which can make patients easy to identify. Some people assume that because the nurses feel comfortable managing TB cases, they must also have TB. In the Kabwe audience, someone questions why patients are given coloured cards, which clearly identify their illness and can make people reluctant to seek treatment.

By the end of the training session the participants are asked to say whether their attitudes have changed.  Nkweto, a 27-year-old drama artist had been shocked to learn he would not be infected by sharing utensils. “I have a neighbour who is believed to be a TB patient and I never dare eat or drink anything when I pay him a visit,” he says.

“His generous wife always offers me some water, or a drink, sometimes even food but I would never eat for fear of getting infected. Now that I understand how TB is transmitted I will be able to act responsibly.”

Asked whether he is making a difference in the fight against stigma, Steve is quick to allay self praise but with an emphatic ‘yes’ he agrees the training sessions have been successful. “In places where we have passed we have left some kind of impression in people,” he says, adding some communities have come back for further assistance, “and that in itself shows we are on the right track”.