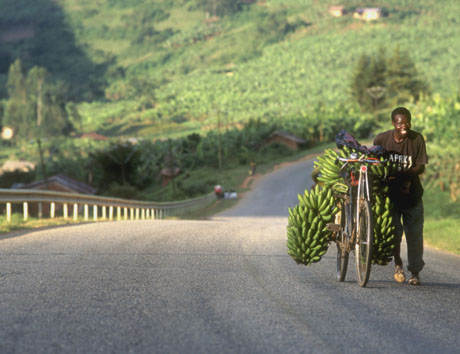 A man pushes his bicycle loaded with green bananas, in Uganda. Bananas are being recognised as an important source of food secuity with unpredictable weather / Trygve Bolstad - Panos pictures

In Uganda bananas are helping to cushion families against unexpected weather changes providing a source of carbohydrates throughout the year. But they’re not always easy to grow, with the drought forcing people to mulch and compost more than before.

Augustine Nsada has become famous in his trading centre of Kasambira in Kamuli district of western Uganda, albeit for doing what many of his folks know how to do already.

Thirty-year-old Nsada gained popularity for being the only commercial producer and supplier of plantain bananas last year when the area was facing a severe drought. The bananas are a staple food crop in most parts of Uganda, but production has been declining in recent years.

Using largely abandoned traditional practices of mulching and applying compost to his bananas, Nsada managed to continue producing badly-needed food. The composting is effective, but it is used with few other crops.

The people of Kasambira and much of Busoga region in eastern Uganda had till 2009 been self-sufficient in food, growing plenty of maize, sweet potatoes and beans. But a six-month drought, starting in April 2009, altered seasons and delayed rainfall. It took many poor farmers by surprise: they had experienced nothing like it for years. The serious food shortage that affected households forced hundreds of thousands of people to buy food from traders instead of being able to rely on the seasonal crops they grew themselves.

The Ugandan Ministry of Agriculture attributed the unexpected drought to climate change. While there is no conclusive evidence of this, recent reports, including those from the Intergovernmental Panel on Climate Change, point to the weather changes already apparent in poor countries like Uganda. A study by Oxfam in 2008 concluded that the erratic rainfall seen recently in Uganda was consistent with scientific predictions of the effects of man-made global warming, while cautioning that weather patterns in Africa are still relatively poorly understood.

Whatever the origin, the impact was devastating. Last year’s drought in Uganda is estimated to have affected up to five million people, in a nation of 31 million.

Plantains are not particularly nutritious compared with beans and maize. But plantain consumption is a strong part of Ugandan culture, which insists that any serious meal must include steamed plantains.

Nsada managed to continue harvesting the plantains for home consumption and for sale throughout the drought. Plantains will grow all year round with moderate rainfall and sunshine. But plantain growing is demanding work, and not many people are ready for the laborious mulching and pruning required.

“During the recent drought, many people looked to me for food because they had consumed all their reserves,” he said.

Abdu Waiswa, who runs a maize mill in Kasambira, agreed that annual crops like bananas and cassava can help to cushion families against unexpected weather changes such as droughts.

Dr. Andrew Kigundu, a banana researcher at the National Agricultural Research Institute (NARI) in Kawanda, near Kampala, says bananas store water in their stems as well as producing fruit all year round, making them a vital source of food security during dry spells. But he says that, ‘Bananas have succumbed to extreme weather changes largely because most farmers have abandoned the old traditional practices such as mulching”.

‘Mulching not only prevents fast loss of moisture from the soils, but also minimises tillage that destroys the crop’s root system,” Dr Kigundu says.

While much of the country has largely recovered from the effects of last year’s drought, the government has been encouraging people in its broadcasts to store cereals so that events like the drought find them better prepared.

But the increasing frequency, length and sudden onset of droughts and floods in Uganda and its neighbouring countries in recent years has meant it is difficult to estimate just how much food people need to store when they are already poor.

David Isabirye, a resident of Nalinaibiri near Kasambira trading centre, said he had kept some food for his family last year, but was forced to sell some to pay his children’s school fees.

But the shift towards annual crop production faces many other challenges. Farmers usually prefer seasonal crops, which normally guarantee them two annual harvests, have a longer lifespan than the highly perishable plantains, and are eaten by more people outside Uganda.

Pests are another problem. Scientists estimate that over the past ten years Uganda’s banana production has halved because of the devastating effect of the banana wilt disease. Cassava, another important source of carbohydrates for most communities, has been greatly affected by the cassava brown streak virus. Scientists from NARI say they are close to developing disease-resistant varieties.

Land scarcity is also a factor. Widespread sugarcane growing has taken up much of the land previously used for food production. High population growth rates mean portions of land becoming increasingly smaller, which when cultivated continuously quickly lose their fertility.

Nsada also says the lack of political leadership in the area to mobilise people for production is one of the problems that has deepened vulnerability during weather-related disasters. ‘The government needs to follow its words of encouraging people to save the environment and grow more food with concrete actions and support that ensure people replenish their soil fertility,” he says.

Henry Lutaaya is a Ugandan journalist working as a News Editor for The Sunrise newspaper, published in Kampala. He wrote this article thanks to a fellowship with the Climate Change Media Partnership – an initiative of the Panos Network, Internews and the International Institute for Environment and Development (IIED).