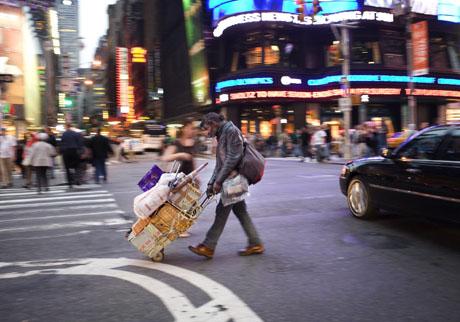 US: Homelessness is another barrier to those living with HIV / Martin Roemers – Panos Pictures

A few hours before the official opening ceremony of the 2008 International AIDS Conference on Sunday, a group of demonstrators loudly demanded “housing for people with AIDS” in a vociferous, but rhythmic chorus.

The activists said the lack of adequate housing was a barrier to effective HIV prevention, treatment and care.

Twenty-one year-old Chakena Conway, is an African American living with AIDS. She lives in a dilapidated house in Brooklyn, New York, paid for by government. “The ceiling tiles are falling down, my cupboards are also falling down; I can’t live like that,” she said.

“You will look at a place and like it, but once landlords hear that they will be paid by HASA (HIV/AIDS Services Administration), they say no, they won’t rent you the place.”

Yet, the US government remained reluctant to increase its housing budget, saying the expenses involved were too high.

Although current research is largely US-focused, it is an issue that demands global action, said King. “All governments need to make a plan to include housing in their HIV policies and strategies.”

While housing has long been recognised as a basic human right, US-based research data shows that lack of adequate and secure housing is directly linked to the spread of HIV, poor health outcomes for HIV-positive persons, and early death from AIDS related illnesses.

“Housing is a right, not a privilege, yet HIV-positive people continue to experience a lot of stigma and have less access to housing than HIV-negative persons,” says Shirlene Cooper, director of the New York City AIDS Housing Network.

Cooper, who was homeless for several years, further explains that homeless shelters were inappropriately equipped to support HIV-positive persons, as they did not offer sufficient sanitation and did not have fridges to store medication, for example.