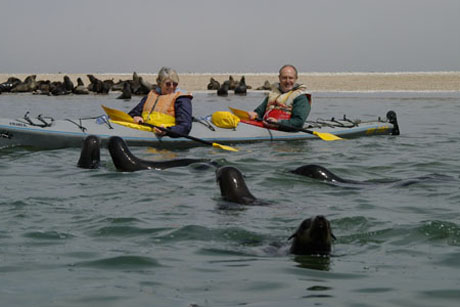 The Benguela is lauded as the current of plenty but the future of its rich marine ecosystem is uncertain. Scientists fear warming seas will spell disaster for the economy of the region where the Atlantic, Indian and Southern oceans meet.

Smoothly Jeanne Meintjes steers her kayak across the Walvis Bay lagoon, a precious wetland on the Namibian coast. Around her the water is alive with hundreds of seals, darting around and dipping up and down in the surf, vying for her attention.

“This year there are about 20,000 seals on the peninsula,” she explains, a particularly daring pup gnawing at her paddle. For the past decade the sturdy fifty-something has taken tourists onto the ocean to see birds, seals, dolphins and whales.

She doesn’t know about climate change, but one thing is clear: no fish to eat, no seals. “When there’s little fish, the beach is littered with spontaneous abortions [seal foetuses], the survivors shuffling around with hollow eyes. It’s awful,” she says.

Billions of fish wiped out

“This makes the system extremely productive, but lately we have witnessed some disturbing regime shifts that can only be explained by climate change,” says Hashali Hamukuaya, Executive Secretary of the Benguela Current Commission (BCC).

“Benguela Niños are becoming frequent and intense,” he points out. Like its Pacific twin El Niño, the African variant causes influxes of nutrient-poor tropical water to trigger a deficit of oxygen in the sea which makes it hard for fish to breathe, “Species that cannot migrate will die,” says Hamukuaya. “The last time this happened we lost billions of fish.”

Oxygen deprivation also causes spontaneous algal blooms, or red tides, threatening the profitable rock lobster and oyster industries. Meanwhile some fish species seem to have disappeared altogether, affecting the fate of top predators. Seals are already migrating and scientists fear for the future of the African penguin. Trawling and eco-tourism could decline.

“There is no anchovy left in the system, and sardine stocks have collapsed,” says Hamukuaya. “Despite very favourable conditions in the past decade pilchards haven’t recovered, and we don’t know why.”

In 2008 the United Nations Environment Programme (UNEP) announced that 61 out of 64 large marine ecosystems were warming up because of climate change.

The Benguela is one of them. The temperature of the current has risen by one degree Celsius in a few decades.

“This leads to displacement of fish and affects spawning patterns,” says Hamukuaya. “The socio-economic consequences are enormous. In southern Angola many fishing communities lost their livelihoods.”

According to the Food and Agriculture Organisation (FAO) 42 million people worldwide live off fishing, while for another 2.8 billion fish is one of their major sources of protein.

At the World Ocean Conference in May in Manado, Indonesia, ministers from fishing nations voiced their concerns over climate change and the risks it poses to” global food security, economic prosperity, and the well-being of human populations.”

In Namibia fisheries constitute about six per cent of GDP, employing 13,000 people, all eager to keep their jobs in an economy that averages 40 per cent unemployment.

Factory worker Isabel Dewee, 48, from Walvis Bay cans fish caught off the Moroccan coast, where Namibian trawlers have ventured in search of better fishing grounds. “The seasonal work provides me with a little extra income,” she says. “I work twelve hours a day from seven till seven, sometimes even on Saturdays and Sundays.”

Jobs on the line

But the industry faces over-capacity, and as yields fail to materialise, jobs are on the line.

“The last time I set foot aboard a ship was in 2008,” complains Malakia Haugo, 35. Like many, the fisherman hangs around the port, passport and seaman’s book at the ready, hoping for a job. Haugo used to clear USD$300 per month working on a trawler. “But now I just do odd jobs and wait for a chance to set sail again.”

Scientists seem to agree that the changes cannot be attributed to the volatile nature of the current, but that they are linked to global warming.

“We know that wind patterns are changing and sea surface temperatures are rising,” says Lucinda Fairhurst of Local Governments for Sustainability (ICLEI). “This for instance contributes to sea storm surges, which affects fish nurseries and the number of days the ports can be used.”

ICLEI is in Walvis Bay to help the city prepare for rising sea levels. “From what we have seen this will be one of the worst affected communities in Africa,” Fairhurst says.

“Namibia joins other developing nations in being concerned now,” says Professor Geoff Brunditt, director of the Centre of Marine Studies in Cape Town. “Shifts in the movement of fish stocks are just one immediate concern. We urgently need better understanding of climate variability and its impact on the local economy.”

For the next three years Benguela countries, supported by Norwegian scientists, will interpret tons of data to establish how exactly climatic change affects the current.

As Jeanne Meintjes excitedly points out a pair of Benguela dolphins that have come to check out the intruders in their kayaks, one cannot help wondering whether three years is fast enough.

Servaas van den Bosch is a Namibian based freelance journalist. He wrote this article thanks to a fellowship with the Climate Change Media Partnership – an initiative of the Panos Network, Internews and the International Institute for Environment and Development (IIED).