Early diabetic deaths due to high cost of treatment 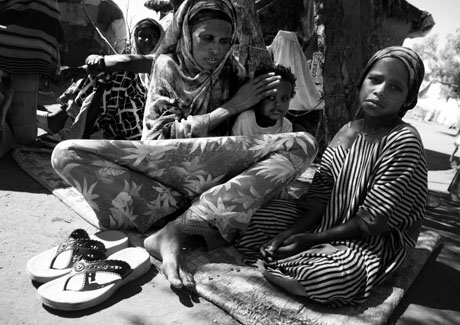 Ethiopia | 40 year old Astur Farah Ilmi lost her husband to diabetes seven months ago. A new report has uncovered that children with Type 1 diabetes in Sub-Saharan Africa are dying one year after developing the disease/ Frederic Courbet - Panos pictures

Children with Type 1 diabetes in Sub-Saharan Africa die one year after developing the disease, as healthcare costs drastically outstrip earnings.

A new report has revealed a wide gulf in the cost of diabetes treatment across developing countries. The total cost of care for a person living with diabetes in Mozambique, for example, is around 75 per cent of their yearly income. By contrast, it is just seven per cent in Nicaragua where insulin and diagnosis tests are free.

The researchers found that this broad difference in the cost burden of diabetes care hinges on government policies.

“The study found that health system factors such as distribution networks and government policies played an important role in determining access to people with diabetes to medicines and care,” said David Beran, a senior research fellow at the Centre for International Health and Development, University College London, and co-author of the report.

The study, by the UK-based International Insulin Foundation, was carried out in Mozambique, Mali, Nicaragua, Vietnam and Zambia. It was published in this month’s Diabetes Research and Clinical Practice Research Journal.

It reveals that the price of insulin varied widely within each country depending on where it was sold and how it was paid for. In addition, some countries charge import duties and value added tax (VAT) on insulin, pushing up prices. In Mali, healthcare facilities are charged for storing insulin and, with a national policy of cost recovery, these charges are passed down to the individual. In Mozambique the cost of transporting the goods emerged as one of the top costs.

The researchers found that all countries except for Nicaragua charge VAT on syringes, which are not readily available in the public sector. In Zambia syringes can cost anything between US $0.15 and $1.50, the researchers found. As a result, many people were reported to be re-using single-use syringes, potentially leading to further health problems.

Diabetes on the rise

According to the World Health Organization (WHO), diabetes accounts for five per cent of global deaths, of which 80 per cent occur in low to middle income countries. The WHO has estimated that the number of people living with diabetes will rise by 50 per cent in next 10 years.

“Without proper diabetes care (medicines, access to trained healthcare workers, diagnostic tools, diabetes education and so on) people with this condition face high rates of complications and early death,” Mr Beran said. “There is the added urgency for people with Type 1 diabetes, especially children, in that lack of access to insulin, even for a short period, can lead to premature death,” he added.

The report used Rapid Assessment Protocol for Insulin Access (RAPIA) to assess the different elements that influence access to insulin and care for people with diabetes in a given country. RAPIA looks at three levels: a ministerial or governance level, a health care level (including health centres and pharmacies) and individual level (carers and people with diabetes).

The study revealed that many healthcare workers in the five countries assessed “rarely encounter people with Type 1 diabetes”. This can mean that the disease is missed or misdiagnosed, the report found. The report recommends education for both trainee and practicing healthcare workers.