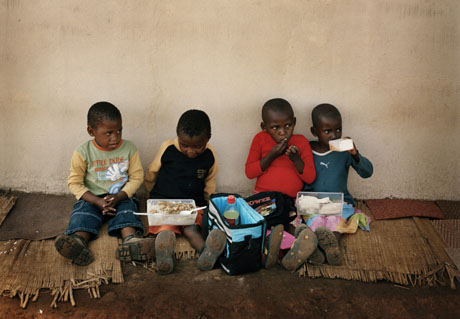 South Africa: children need an integrated approach to their development in the face of AIDS / Chris de Bode - Panos Pictures

Pam Picken says South Africa has the will to improve life for young children – now it needs to find a way.

South Africa has approximately six million children under the age of six, 61 per cent of whom live in conditions of dire poverty.

The impact of poverty is exacerbated by the HIV and AIDS pandemic, in which South Africa has very high prevalence and the fastest growing infection rate.

The situation is worst in poor rural communities, and is devastating for young children in this critical period of their development. This is especially difficult if they are totally dependent on their caregivers for survival, protection and development.

We must have an understanding of what’s working and what isn’t for young children made vulnerable through poverty and HIV and AIDS in South Africa.

At last there are growing signs of strong political will to address the challenges facing South Africa’s youngest, most vulnerable citizens.

Early Childhood Development (ECD) is one of the South African Government’s current top 24 priorities, with an increased budget. South Africa has recently passed a new Children’s Bill, in which guidelines for ECD services are spelled out.

It is clear that such services must be integrated and that this approach requires government departments to work inter-departmentally, as well as to have an inter-sectoral working relationship with civil society organisations.

The challenge is: how? Government departments are not used to working inter-departmentally, and have not yet established a framework for inter-sectoral collaboration with civil society.

The South African Government needs to develop the framework and provide the resources to take these programmes to scale to benefit the critical mass of South Africa’s vulnerable young children.

The challenges facing them are urgent and critical, especially in the context of HIV and AIDS.

It can be done!