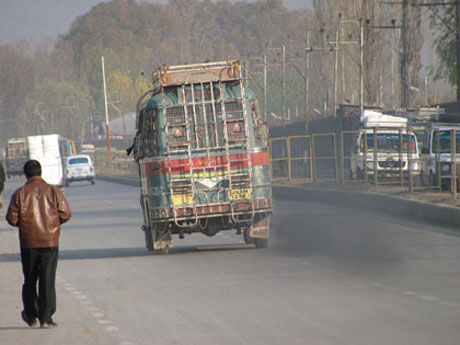 Indian car sales are booming thanks to easy credit and cheap manufacturing. But who is counting the environmental cost?

Irshad Ahmad is all set to roll his Chevrolet Beat down the road. Fresh from the showroom in Srinagar, his Chevy will be among the 21,600 new cars expected to hit the road in the Kashmir region of Jammu and Kashmir by the end of the year.

Out of a population of 5.6 million, 75,000 people in Indian-administered Kashmir own a car – a tiny figure when compared to Europe or the US.

But things are changing fast. In Delhi, 1,000 new vehicles are added to the streets daily. Passenger car sales across India jumped 32 per cent in 2009, boosted by easy financing terms.

Irshad works in a private telecoms firm on a monthly salary of 19,000 Indian Rs. [about USD $420]. It is not enough to support a family of six and comfortably run a car, but he is prepared to make sacrifices. “I sought a car loan from the bank which I will be repaying by easy monthly instalments,” he says, “I thought it is better to cut down on other expenses if I and my family are to travel hassle-free.”

Banks loans finance nearly all the cars sold at this Srinagar showroom. “We decided to cut down on corporate lending and laid more focus on retail lending. The latter gives us more profit and security,” says Eijaz Ahmad, an official from Jammu and Kashmir Bank. The bank sanctioned loans of more than half a billion Indian rupees [about UDS $11 million] in the last quarter of 2009.

Irshad represents a society where almost everyone has a dream of travelling without wasting time on public transport. He is not bothered that more cars will mean more congestion in Srinagar city where traffic jams already last for hours on end.

“You know owning a car is a necessity given the pathetic plight of our public transport,” he says, while admitting, “I have no idea if more cars on the roads pose a threat to the environment.”

India has more than 85 million vehicles on its roads and the negative impact of the car-boom is slowly coming to the fore, both in terms of congestion and environmental costs.

Last year’s launch of the Nano, the world’s cheapest car (around US $2,500) – by Tata Motors – provoked environmentalists. They warned it heralded a “nightmare” of choking pollution and clogged roads.

Drivers blame the government. “It is the duty of the government to put a viable alternative in place or expand the roads in order to avoid traffic congestion,” says Abdul Hamid who drives from his workplace in Pampore to his home at the weekend.

This month regulators introduced new fuel standards, designed to cut sulphur emissions by between around 40 to 50 per cent. Nevertheless India lags around six years behind the US and Europe in enforcing standards for cleaner fuels.

Anumita Roy Choudhury of Centre for Science and Environment, who heads the organisation’s Right to Clean Air campaign, says the real issue is a lack of government support for public transport. She contends that cars are only cheaper because the industry is heavily subsidised. “Car companies get big subsidies at the manufacturing stage through cheap land deals, interest-free capital and other concessions. “These subsidies help bring down the cost of production and allow the manufacturer to price the car cheap.”

She contends that public transport gets a ‘step-motherly’ treatment. “Our government penalises buses by taxing them higher than the much-pampered cars. Buses that use less than five per cent of the road space, meet more than 60 per cent of the travel demand,” she says.

“Cars may drive growth and aspirations, but they can never meet the commuting needs of urban India.”