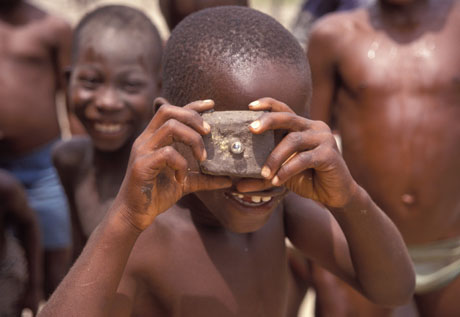 Should poor countries do more to exploit their poverty in the media? A film by artist Renzo Martens asks thorny questions about photojournalists and aid agencies.

A line of Congolese militia trudges through thick vegetation. All but a few of them are skin on bones. “We need to show them the bodies,” they tell the cameraman following closely. They lead the way to a huge compound dotted with a few huts. A number of swollen, fly-infested bodies lie here and there. The Western photographers zoom in, clicking away rapaciously. Then they kneel and reposition their camera lenses for a better shot.

The slightly puzzled photographer replies, “Me.”

“But they organised the situation,” counters Martens.

“Yes, but it is me that chooses to make a picture out of the situation, so it is mine,” the photographer insists.

This is one of the many thought-provoking scenes in Renzo Martens’s documentary-style film ‘Enjoy Poverty’ being screened around Europe. Martens is a Dutch artist who uses his film to protest against the exclusion of the Congolese people from making money from a resource that belongs to them. This resource is poverty.

He argues aid agencies and journalists alike generate the pictures of Africa that we see for their own benefit, but do not make any real changes in local communities. “There is no interest in changing the structural issues,” he says, “they [NGOs] want us to see a child suffering but they do not show us that the parent is earning four dollars a week. It is beyond their mandate.”

Martens contrast the poverty in the Democratic Republic of Congo with the earning power of the media who are there to capture it. We see, for instance, the plantation worker who earns 50 cents for three days of hard labour. He has a severely malnourished daughter, and he and his family survive by eating manoic [cassava] leaves. A Western photojournalist, on the other hand, could earn 300 US dollars for a photograph portraying this.

In the film Martens convinces some Congolese wedding photographers that they could earn similar amounts if they took photographs showing “rape, death and malnutrition.” However when they try selling their pictures to the medical aid charity, Medecins Sans Frontieres (MSF), they are rejected because of their poor quality.

White guy who changes nothing

But while Martens might be attempting to shed light on what he calls “our distorted reality”, viewers have expressed concerns about the fairness of his portrayals. For instance, at a screening in London an MSF staff member pointed out that in the film the local photographers had approached MSF’s doctors to buy their pictures. But photographs are actually commissioned at the charity’s headquarters, and doctors have no control over them. Serious questions were also raised at the screening about his premise that poverty is a resource to be exploited, and his decision not to intervene to stop the suffering of the people he was filming.

“I did not interfere in the situation so viewers could have a brutal picture of the injustices that take place,” said Martens in response. Keen to point out he did not go to DRC to change things or give people false hope, he added, “I let the politics that decides reality decide this film. Maybe I’m just a regular white guy who goes to Africa but changes nothing. I am you.”

“On a daily basis we get half a dozen requests from photographers but we rarely get applications from Africa,” says Adrian Evans, the director of London-based Panos Pictures which holds an archive of up to 500,000 images from around the world. Panos Pictures aims to document issues which are under-represented, misrepresented or ignored. Evans says the African photojournalists he knows tend to work for international news agencies whereas Panos Pictures hires freelancers. “I suppose when you come from a poor country, you crave [job] security,” he adds.

Responding to Martens’s view that poverty is just another resource, Evans argues patterns of exploitation are repeated everywhere. “I think that everything is commodified and poverty is not excluded.” What of the assertion that photojournalists profit from African’s poverty? “You could say the same about a photographer taking pictures on a council estate in England,” he argues, adding that many photographers do in fact voluntarily send money back to poor communities.

Medecins Sans Frontieres Photo Projects Manager, Bruno Decock, is yet to see the film, but believes a lot of Martens’s portrayals were based on prejudgements about MSF. “When I take photographs I try to tell people a story. I try to explain what is happening and try to educate them. I am very strict about giving people dignity and not exploiting children who are maybe having a bad day because I want to give people what they want to see. I do not want to reinforce the European stereotype of Africans being all corrupt and dying of poverty.”

Decock thinks the exploitation of people’s misery by some aid agencies can be excessive but he rejects Martens’s provocative call to enjoy poverty. “I think it is perverse to tell Africans they should exploit their own misery. I’m not saying it is entirely dishonest that exploitation happens but it does not really apply to organisations that have been around for such a long time.”

Who owns the image?

Another debate the film throws up is the ownership of photographs. A photographer or his or her employer usually owns the copyright of any photos he or she takes. Anyone who wishes to reprint the photos must obtain permission. Decock from MSF says, “Copyright laws give ownership to the photographer, but I think people portrayed are also entitled to ownership. I think something should be given back to the community. At the same time, many photographers believe that their pictures will make a change to the lives of the people.”

This is a thought shared by Glen Tarman. He is the advocacy manager for BOND, an umbrella organisation for international development NGOs in the UK. He says, “It can be exploitative representing images in development. Capturing the right image in a one or two-dimensional photograph is difficult, and the challenges surrounding images are an ongoing issue.

“Sometimes if an NGO is using an image to tell a story to audiences in the [global] north, it could be that the community will never see any benefit. But it could also be that the communication will have a powerful effect in creating change. The judgement call is would you rather tell a story without the images, or would you tell the story with the images though imperfect?”

Who should be at the helm?

Ultimately Martens is not only interested in the ownership of photographs. Through his film he touches on wider debates about colonialism and exploitation. To him the same patterns that existed in colonial times, where European countries controlled African resources and exploited them for their own ends remain today. Now, he argues, multinationals, NGOS and journalists continue to perpetuate the same ‘distorted reality’ in which those who own the resource – in this case poverty – are excluded from exploiting it for their own benefit. The structures that reinforce patterns of poverty are still in place, with some at the receiving end and others at the helm.