You are here: Home » Blogs & features » Print features » Enterprise: the key to survival in Dadaab 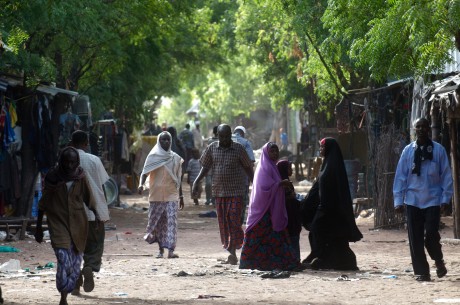 Dadaab refugee complex usually only makes the headlines in times of crisis. Yet when the cameras stop rolling the sprawling complex in north eastern Kenya continues to be home to nearly half a million people. Unable to leave the camps without travel permits and unable to officially work due to Kenyan employment laws, many residents have turned entrepreneur to survive.

The roads are just bare earth but they teem with women browsing stalls of kale and bananas, girls clad in buibui (the Swahili word for the black shawl Muslim women wear to cover their heads) giggling over a mobile phone and small halls where men watch football, cheering on Arsenal, Manchester United and Real Madrid. Homes are ramshackle, built of wood and cane, covered with plastic sheets, but inside some can be spied TV sets, with satellite dishes erected outside on the ground.

Hagadera, Ifo and Dagahaley, the three main camps which make up the Dadaab complex, have lively centres, with small restaurants, butchers, stalls selling khat (leaves that provide a mild stimulant when chewed), radio and TV repairers and mobile phones shops. Small businesses like these generate US$25 million a year, according to research commissioned by the Danish and Norwegian governments in 2010.

Horseed Hotel is a simple eatery in Ifo camp selling meat stews and other basic dishes, which employs 11 people. There are a few tables outside, as well as an enclosed area, a small kitchen and a booth for the cashier. A mug of tea, a plate of meat stew, a bun and a banana (served with every meal)  costs KSh80 (a little under a dollar). The same would cost twice as much or more in Nairobi. Nevertheless the modest business has transformed the life of more than one family in the camp.

Its owner, Addullahi Ahmed Mohamed, arrived from Somalia on foot in 1991, skinny and exhausted, with his young wife and two young girls, fleeing the civil war that gripped the country and had already claimed the lives of two of his brothers.

“It was a journey I will never forget,” he says. “Along the way we abandoned our son who was weak and on the verge of death. I was tired and could not carry him anymore. We placed him down under a tree and moved on.” 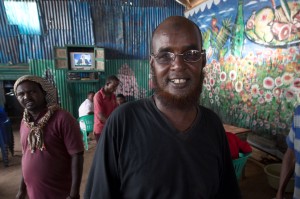 This is not an unusual story to hear in the camps, where families have had to make heart-rending sacrifices in order to make a future for the rest of their children. “I decided to change my life from that of a refugee waiting for rations to a man who can make good out of a bad situation,” says Mohamed. “An inner voice told me to take a new direction and that is why I went into business.”

Like all refugees, Mohamed cannot leave the camp without a permit. He gradually built up the business, initially selling sugar, tea leaves, sweets and toothpaste on foot around the camp – bought with a soft loan of Ksh 12,000 ($144) from a fellow refugee – then running a vegetable stall.

“Just because we are refugees, we live and act like human beings elsewhere. Irrespective of what condition we may be in, we are human beings and always need certain basic things,” he says.

The camps attract business from around Kenya. Huge trucks from Nairobi and Mombasa criss-cross the rugged earth roads bringing supplies to NGOs and businesses. Kenyans, who have the advantage of being able to travel, have been coming to Dadaab since the camp’s inception in the early 90s to run businesses such as car hire in the area, catering to visiting NGO workers and journalists.

All refugees, no matter how long they have been at Dadaab, receive World Food Programme (WFP) food rations, every two weeks, of wheat flour, corn soya blend (CSB), yellow peas, salt, sugar and cooking oil, which provide a recommended 2100 calories per day.

Food in Dadaab is a bit cheaper than other parts of Kenya. Staples, such as maize, rice, wheat, sugar and cooking oil, are around 20 per cent cheaper in the camps, according to research by the Danish, Norwegian and Kenyan governments, due to re-sale of WFP rations, access to free food by locals registered as refugees and illegal imports via Somalia. 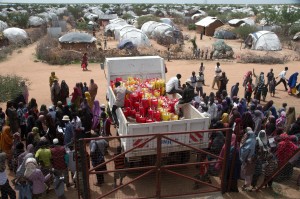 In total, WFP distributes around 10,000 metric tons of food per month, valued at US$10 million. Any extra supplies, such as fresh vegetables, have to be bought within the camp. Some refugees receive so-called “incentive wages” from aid agencies and NGOs, while others receive money from relatives abroad via Western Union – and now straight to their mobile phones – though they are in the minority.

Mohamed also supplies food to international NGOs, such as Save the Children, when they have seminars or workshops. “From a penniless man 20 years ago, I am now able to supply these institutions,” he says, waving contracts fished out of a green plastic file.

Abdi Aziz Hassan arrived in Dadaab in 2002, fleeing fighting in Somalia. Together with a fellow refugee he runs an improvised shop that sells mobile phone accessories. He also has a thriving M-Pesa business – Kenya’s most popular mobile phone money transfer service – which he runs with a Kenyan business partner. Kenyan laws do not allow refugees to formally engage in business activities, so he would not have been granted a license alone.

“It is my desire to go back to my country, Somalia, if peace can prevail,” says Hassan, who is in his forties. “But if I am still in this camp, I have to do something to earn a living for my family.”

David Kang’ethe, country director of the Danish Refugee Council (DRC) in Kenya, says that insecurity in the camps is now one of the biggest challenges. Attacks by armed Somali groups and sympathisers have prompted some aid agencies to evacuate their international staff and scale back on services. But this is also creating opportunities for refugees.

“Things have turned out to be what they are but we have refugees in Dadaab that cannot be abandoned,” explains Kang’ethe. “So we looked at how we could do it differently from the way we have done it in the past, such as getting refugees more involved in the day to day running of the camp.”

“Most of what used to be done by humanitarian agencies in terms of day to day running is being transferred to refugees,” Kang’ethe adds. “We do as much as we can with refugees in the camp. Some of them are very skilled.”

One area where refugees are taking a more active role is healthcare. 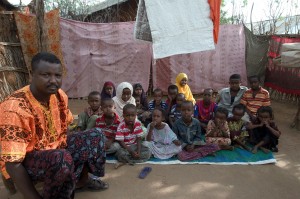 Maruf Abdi Omar, 37, arrived in Dadaab when he was just 19 “with barely the clothes on my back with my wife and three children in tow”.  Thanks to the skills he learnt working with Medicines Sans Frontier (MSF) in the camps he has opened his own clinic. “I examine sick refugees, do tests and prescribe drugs,” explains the father of 24. “I also treat them, including administering injections.” During the times when international aid workers have been evacuated from the camps, he and other refugees have been able to keep clinics and hospitals open.

In addition, community peace and safety teams (CPSTs), community policing groups, created and led by the refugees themselves, have helped reduce violence in the camps. However, not without a price. At the end of last year two community leaders in Hagadera and Ifo camps were killed by al Shabaab sympathisers, because they were perceived as assisting the police.

One of the biggest frustrations for young refugees is the fact that they can’t travel or work. Many young people were born in the camps and there are very few employment opportunities. The Danish Refugee Council, like other NGOs working in Dadaab, has a series of projects to build refugees’ skills and self-reliance. 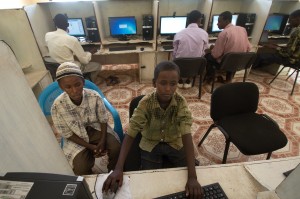 There are internet cafes where people can learn computing skills and get online; women have been given donkey carts so they can ferry supplies, charging small amounts for the service; people are trained to make doors and bins from the thousands of metal cooking oil tins that are brought to the camp; in Ifo women grow vegetables in greenhouses to sell; and bright students are sent to study at university in Nairobi.

“They are better prepared if they are able to move away,” Kangethe says. “And if they go home [to Somalia] there is something they can take with them.” “But overall,” he admits, “it’s like a drop in the ocean.”

Other challenges include limited access to education, the risk of recruitment by armed groups and drug abuse. On their own there is little chance for people to improve their self-reliance. But there are more than 100 youth groups which organise sports and livelihood activities to give young people something to do.

Noor Hassan is a former chairman of one of the Hagadera youth groups, which has nearly 2,500 members. “We have several income-generating activities,” he explains. “We have a number of butchers all round the camp and this is giving good income. We also have an electricity project through which supply electricity to a number of households from generators that we own. We charge them for consumption. This is proving very vital in this place where people have lived mostly in the darkness for so long.”

Abdi Yassur, 21, won a scholarship funded by the German government to complete a bachelor’s degree in education at Kenyatta University in Nairobi.

However, thanks to Kenyan employment laws he was unable to search for a job along with his contemporaries on the course. Instead, Yassur had to return to Dadaab where he earns KSh 5,000 (US$60) per month in incentive wages teaching at one of the schools.

Although schools are officially closed for the holiday, Abdi is tutoring students in one of the classrooms. He wears neatly pressed clothes and sports gleaming black shoes.

“For the moment I am just happy that I am able to apply my knowledge to teach Somali children and equip them with skills to become useful and productive citizens. I’m particularly excited that many are now able to communicate in English and Kiswahili, which are the common languages used in transacting business in Kenya.” He looks forward to the day when the children he teaches will be able to use these skills beyond the camps.

“I also long for the day I will acquire a Kenyan work permit,” he adds. “It will pave the way for me to contribute to the economy of this country which I love very much, as it were my own.”

Once they arrive, very few refugees leave Dadaab. As David Kang’ethe explains:  “There are services found in Dadaab that mean refugees find it a much better place to stay. You could be moving out of Somalia because of the drought. But in the camp there are opportunities, such as education for your children. They might not be adequate by other standards but there is food, water, health facilities. It ends up becoming a better option to stay.”