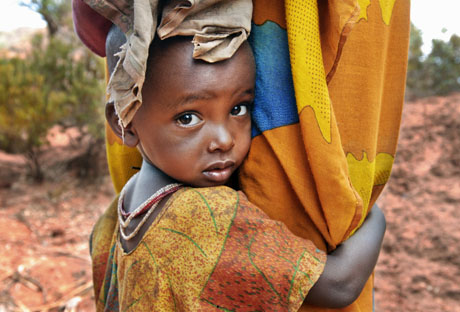 Ethiopia | A young boy holds onto his mother in an area suffering from drought. A new study says that climate change will increase inequality in the region / Dieter Telemans - Panos Pictures

A new study predicts the effects of climate change will reduce Ethiopia’s economic growth and widen the gap between the country’s poorest and richest people by 20 per cent.

The report, Economic and distributional impacts of climate change: The case of Ethiopia, assesses how each economic sector, such as agriculture and manufacturing, will be affected by climate change. The study, published in last month’s Global Environment Change journal, models three future climate scenarios that assume an increase in temperature and lower levels of rainfall to varying degrees of severity.

“So far there has been almost no research that has dealt with the potential economic and distributional impact of changes in the climate of Ethiopia,” says the author, Torben Kenea Mideksa, a research fellow at the Center for International Climate and Environmental Research at the University of Oslo. “This study aims to fill that gap.”

The study highlights World Bank data which claims 44 per cent of Ethiopia’s population lives in poverty. Since the 1990s, Ethiopia has seen an average annual growth rate of three per cent. However, the study predicts that overall the effects of climate change will reduce GDP by 10 per cent.

The impact on agriculture

In the last 50 years Ethiopia’s droughts have sometimes resulted in severe famines. The study points out that Ethiopia is already experiencing higher temperatures than might be expected for the region. In the report Mideksa cites a study by Melissa Dell in 2008 which found “for every one degree increase in temperature, on average, agricultural productivity is reduced by 1.10 per cent”.

According to the report, in all three climate scenarios the biggest impact of climate change would be felt in the agricultural sector because the sector’s productivity hinges on temperature and rainfall.

Mideksa told Panos: “Given that a large percentage of population, about 85 per cent, uses land to generate income, the decrease in income affects many people. However, since income from capital and skill are independent of climate outcomes, the remaining proportion of the population gets its income directly unaffected.”

The report argues that this will result in an increase in income inequality.

The report predicts the effect of climate change on agriculture will differ according to geographical location. Mixed peasant farming in the lowlands will be the one of the hardest hit, the study suggests. This region has already experienced “crippling droughts and has been almost permanently reliant on food aid for the past five years”, the study says. The temperature rise predicted temperatures in all three climate scenarios suggest worsening conditions for agriculture in this region. Smallscale farmers in highland areas who grow crops and rear livestock will be less affected, the study predicts.

The role of adaptation

The current chairman, Dr Rajendra Pachuri, of the International Panel on Climate Change (IPCC) said that 50 per cent of agricultural yield will be reduced by 2020 in some African countries and “crop revenues could fall by 90 per cent by 2100 in Africa”. However, this study challenges this finding, suggesting there will be loss in yield but on a more modest scale. For example, Mideska suggests the Dr Pachuri’s statment does not take into account the knowledge of experienced and intelligent farmers who will adapt to climate shocks as they have done in the past.

Nevertheless, “the results suggest the impact of the projected climate shock [will be] daunting,” according to the report. It suggests that as the vast majority of Ethiopians are dependent on agriculture, the country needs to shift to a non-agricultural based economy to offset the effects of climate change. Moreover, raising productivity in the agricultural sector will be largely dependent on technological progress “such as drought-resistant crops, improved information access and better farming practices”.

If the negative effects of climate change are left unchecked, Ethiopia’s path to development will be significantly hindered, Mideska concludes.

Title: Economic and distributional impacts of climate change: The case of Ethiopia

Available to purchase from sciencedirect.com