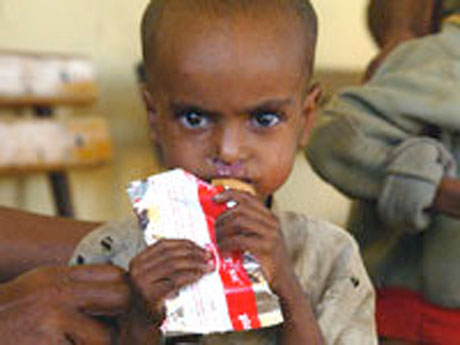 The G8 says it will tackle food security. But in Ethiopia where millions face hunger, donors have given only a third of the aid money needed.

Driving to Shinshicho, a small town 419km south of Addis Ababa, the land on each side of the gravel road is covered in rich vegetation. The area is known for producing Yirga Cheffe and Sidama coffee and it usually enjoys a good wheat harvest.

Seeing the greenery, it is hard to believe a recent extended dry season has led to acute food shortages. But standing at the iron gates of Shinshicho Health Centre, the picture becomes clearer. Nearly 200 mothers bring malnourished children here daily, filling a temporary shelter covered with a green plastic sheet.

Matiwos Laeligo, 35, a father of four, is the only father at the health centre. He is finding it difficult to comprehend the admissions criteria. He has brought two of his children. When he arrived after a three-hour walk from his village, Buge in Kacha Bira district, he was sure his children would get treatment or food. “I left my two sick children with neighbours,” he said, “I sometimes beg my neighbours to feed them.”

Newly-arrived children are screened to see whether they qualify for the Outpatient Therapeutic Programme (OTP). “We receive 80 to 150 outpatients and around 60 newcomers every day,” says Eskedar Aron, a Médecins Sans Frontières (MSF) nurse, who is screening the children.

The lucky ones get sachets of plumy nut, a therapeutic food which tastes like sweet peanut butter, and consists of peanut paste, vegetable oil, sugar, milk powder, vitamins and minerals. Those in a critical condition are transferred to a stabilisation centre.

Despite some children showing signs of malnutrition, not everyone is admitted. Health officers stick to their screening criteria. Only when a child’s weight to height ratio is 70 per cent or less than the standard ratio for their age, when the circumference of their arm is less than 11 centimetres and they have water retention and swelling, will they be admitted.

When Matiwos’s children were rejected, he burst into tears. “Their mother died of birth complications,” he shouted, while holding his smallest son. “There is nothing left at home to eat. So what am I supposed to feed them?” As he tried to persuade the health officers to change their minds, his son also began to cry.

Their tears made no difference. After almost half an hour of pleading, the guards told Matiwos to leave the compound. After he hesitated, they used force and dragged him outside.

Matiwos is a farmer producing wheat and maize, the region’s staple food. Last year’s yield was small because the main rainy season was poor. He had then planned to plant sweet potato during the short rainy season which normally runs from February to mid May. The eagerly awaited short rains, however, did not arrive on time.

Millions of people in his region have been affected by the extended dry season. The drought has left 4.6 million people country-wide needing emergency food aid, of which 75,000 are acutely malnourished children. Matiwos’s region is one of the worst-hit areas and children are the first victims. In the three weeks prior to my visit, 20 children had died in the stabilisation centre, next to Shinshicho health centre. These are the officially recorded deaths. Many children die before getting any aid or treatment.

Tigist Hangiso, a resident of Hadero, a small town near Shinshicho, has seen five children die in her area. A mother of six, she fears the same fate for her youngest daughter Tseganesh Abera, who is three years old but weighs only 6.9 kilogrammes. Before it was too late she took Tseganesh to Hadero Health Centre.

Despite queuing patiently for a day, she was not lucky enough to see the health officers. There were too many mothers and children. Walking an hour from her village, she arrived early the next day. She again waited for hours with her baby and finally, 45 minutes before closing time, she was seen. The MSF doctor and nurses screened Tseganesh and admitted her.

Tseganesh is a lucky baby. Her mother left two of her elder brothers, who could not even walk, at home. Tigist was relieved when she received 21 sachets of plumy nuts for Tseganesh. MSF also gave her edible oil and food for the family. “We do not have any food at home,” she said. “I already sold all my cattle to buy some food.” With the proceeds, she bought maize from the market but it only lasted a month. To buy more food, she is forced to work as a daily labourer but her wages are no longer adequate. Maize now costs more than eight times the previous standard price.

The Ethiopian government has appealed for nearly half a billion dollars from the international community, while consistently announcing that the situation is “under control”. It has so far received around 160 million dollars, just over a third of its target and last week called for more funds.

Opposition parliamentarians, however, claim the government is hiding the true extent of the hunger. Some have even made comparisons with the cover-ups of past famines carried out by former regimes in the 1970s and 1980s. The chairman of the opposition Oromo Federalist Democratic Movement (OFDM), Bulcha Demeksa, wants the government to adjust its own budget to provide extra money to deal with the drought. “What is happening now is very worrying and scary,” he told parliament.

Between now and November aid agencies estimate that hungry people will need approximately 400,000 tonnes of food but they worry there is not enough available food aid on the ground. Farmers like Matiwos and Tigist’s husband continue to sow maize and beans in the hope of a small harvest. But pests have already infected parts of Matiwos’s farm and he worries his crops will be destroyed. He badly needs assistance.

Until aid reaches his village, Matiwos is taking any daily labouring job on offer but the wages are only enough to feed his children once a day. When time allows he also goes to the market to collect leftover root crops. He is not sure how long his children can eat like this and survive.