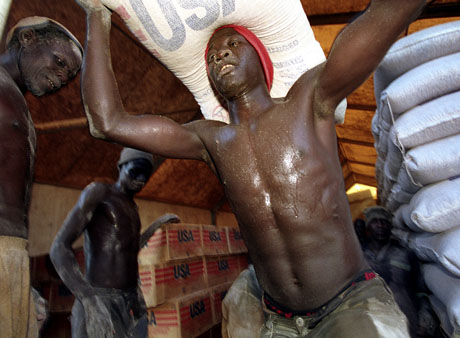 Martin Etworu was sure his family would have enough food to last until the next harvest. Half an acre of thriving sweet potatoes, a plot of cassava and another of sorghum meant he had no reason to worry.

Then everything went wrong. Rains that were unlike anything the villagers had ever seen left the family without food. ‘In August the floods came and it rained heavily every day,’ said Etworu, standing in what was once a small plot of potatoes near his home in Agora village in Soroti County, which is about 330 kilometres north-east of Uganda’s capital, Kampala. ‘The whole village was affected. Our crops were all destroyed.’

In other areas of Soroti and in neighbouring districts the situation was even worse. Etworu, 46, and his fellow villagers were lucky the rains had not flooded homes and cut off whole villages as they had elsewhere. Forty-three people had died in these areas and the impact of the floods was still being felt months afterwards.

When I arrived at Etworu’s farmhouse, his wife, Jane Amunyo, was not at home. She had gone to Katine sub-county 10 kilometres away to queue for food relief. ‘I didn’t have anything to feed my children with,’ said Amunyo, 37, after she had returned with 50 kilos of maize flour, 12 kilos of beans and three litres of cooking oil.

Etworu admitted his family, with seven children between the ages of two and 15, is dependent on food aid from the Soroti Catholic Diocesan Development Organisation (SOCADIDO). ‘If it was not for SOCADIDO, we would have a more serious problem because there are no rains now,’ said Etworu, who earns about 1,000 Ugandan shillings [around 60 US cents] per day catching and selling mud fish on Lake Kyoga. ‘At least when the rains come in April, you can supplement your income by working for people who were not affected by the floods.’ He gets food in return for his labour.

There are at least 2.5 million Ugandans who face famine directly as a result of last year’s floods and who are relying on the World Food Programme to eat between now and the next harvest.

Etworu looked bemused when asked if he had heard any warnings on the radio as the area was about to flood, as though asking himself, how could anyone know? He smiled and looked at his two sons questioningly – just in case he was the only one who had missed it, ‘No! No. We never heard anything,’ said Etworu. ‘It was God’s plan.’

But Etworu cannot say whether such an announcement would have made much difference. ‘Even if you are warned, where will you run? If you don’t have land elsewhere, how do you transfer yourself to another area?’ he asked.

As far back as 1995, a US-funded vulnerability, adaptation and mitigation assessment study identified areas in which Uganda could improve its ability to predict and adapt to climate-related problems.  Among them was a recommendation for the country to strengthen its meteorological services in order to provide reliable medium-to-long-term advice about droughts and floods.

In the past extremes of climate were not a big issue in Uganda. The country experienced a drought approximately once every 20 years.  In 1970 this changed and the country started to experience droughts at least three times a decade. ‘Between 1990 and 2000 we experienced seven droughts,’ said Principal Meteorologist Paul Isabirye. ‘Now there’s a drought almost every year.’

He has seen other changes too. Rwenzori mountain snow that used to be a source of fresh water to local communities during a thaw has disappeared and the once cold Kabale district has become warmer and attractive to mosquitoes which spread malaria.

The meteorology department is housed on the 10th floor of the dilapidated Post Office Building in Kampala. The lift regularly fails and it looks more like an old store than a government building. Paul Isabirye says about US $3.5 million is needed annually to run the department successfully.  He receives around US $500,000.

It should employ 400 people but there are 250 employees.  According to Isabirye there should be at least 40 regional stations monitoring changes in the weather in order to provide a comprehensive forecasting service.  There are just 18.

Despite the squeeze on resources, accuracy levels at the department have improved from about 30 per cent in the 1980s to about 80 per cent today, success Paul Isabirye credits to donor money and regional intervention. The establishment of regional hubs like the Drought Centre in Nairobi has helped the organisation to run more efficiently.

With climate-related catastrophes expected to become a regular feature of life, the pressure to find more resources and a longer-term coping strategy is mounting.

‘We have no technical know-how, no resources and no gadgets to prepare ourselves for climate change,’ said Frank Muramuzi, executive director of non-governmental organisation, the National Association of Professional Environmentalists and a critic of the government’s environmental track record. He was imprisoned last year for protesting against the proposed clearance of parts of the Mabira rainforest on the north shore of Lake Victoria.

‘Instead of begging the World Food Programme for help, let them buy tanks for every family to harvest rain water,’ he said. ‘We now have floods, let government store that water and educate farmers on how they can use it during drought conditions,’ he added.

Another recommendation in the 1995 study was for the Uganda Disaster Preparedness Committee to include long-term hazard reduction related to climate change in its work. Uganda’s Disaster Minister Musa Ecweru accepts the government was unprepared for the magnitude of the floods in 2007 but he believes lessons have been learnt. ‘Our potential as a country to respond to disaster has improved,’ he said. ‘We want to become experts on disaster preparedness.’

Unfortunately with climate changes becoming a more common feature of life, it is likely Ugandans will get plenty of opportunity to put this expertise into practice.