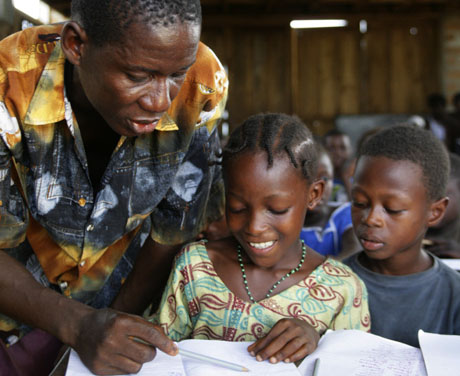 Thousands of children are still in the dark about the disease, despite the impact on their own lives and families.

It is 2pm at Liketu Primary School, about 135km from Lesotho’s capital, Maseru. The bell rings and children run outside to the playground before going home.

But 10-year-old Lineo Mofoka has to rush home to take care of her twin sisters who are only three and a half years old. Their mother died when the twins were only two. Now Lineo mothers her sisters as both her parents are dead.

The twins have AIDS and Lineo knows this. She has heard of AIDS, but knows very little about the disease that took her parents’ lives. “AIDS is a disease caused by a virus which my twin sisters have,” she says.

That is all that she can explain when asked about HIV and AIDS. She is clueless about how it is transmitted. “The nurses at the clinic said I should use gloves to avoid being infected,” she says.

Lineo is not the only one who lacks education on HIV or AIDS. Many young people in Lesotho lack basic information, and are unaware of the ways in which HIV is transmitted, how it can be prevented or how to take care of HIV-positive siblings.

According to the UNICEF Humanitarian Action Report 2008, there are 16,000 children aged under 14 living with HIV in Lesotho and an estimated 180,000 children orphaned or made vulnerable by AIDS.  Some of these children have been forced by the circumstances to head their families and yet there is no programme in place to educate them about HIV.

Lessons on HIV are not mandatory in Lesotho’s schools, though the United Nations Programme on HIV and AIDS (UNAIDS) has highlighted the importance of HIV and AIDS education in global efforts to address the epidemic.

Yet many children are not receiving information. Dr Molotsi Monyamane, a co-founder of People Living Positive With HIV in Lesotho, says that although the Ministry of Education has developed a curriculum on HIV and AIDS for pre-school upwards, the fact that it is not taught at pre and primary schools is troubling. “It nullifies this good initiative by the government because parents and teachers are scared to communicate with children at that level on issues relating to HIV,” explains Dr Monyamane.

He believes one reason is that many older people feel that issues relating to AIDS are not to be discussed in the presence of children. The country’s cultural norms are therefore a barrier to HIV and AIDS education. “They believe that it encourages children to engage in sexual activities yet they do not know that these children already know about sex and how it is done. They think these children are still immune to HIV infection,” he says.

Non-governmental organisations (NGOs) such as Phela (Live) show how to educate children. Phela is one of the NGOs supported by the Ministry of Social Welfare and UNICEF to educate children and adolescents on HIV and AIDS. “We have formed a sub-group from all the 10 districts of Lesotho. We named it: Boys and Girls Movement. We disseminate information through songs and dance, which has proved to be very effective,” Child Rights Programme Coordinator, Thakanyane Motsamai, says.

She explains that since most children like to sing and act, it is easier to spread the HIV message that way. The strategy is also used in high schools to reach out to children who are now heading their families following their parents’ death. “In most child-headed families, some of the surviving children are living with HIV and we have to teach their siblings how to take care of them,” she says.

HIV and AIDS education lessons in some secondary schools, based on these approaches, seem to be progressing well too. “We have music lessons specifically on HIV and AIDS, we use games and puzzles, fun walk activities and teaching with books from Longman specifically made and designed to fit well with HIV education,” says Libakiso Matela, a teacher at Mamohololi Secondary school.

Despite the efforts of government and civil society in Lesotho to combat HIV infection, lack of HIV education at the primary school level presents a major setback in fighting the pandemic.

Letsoela Lestsoela, a headteacher in Lesobeng in Thaba-tseka district, is impressed with the feedback from the children at the secondary school he leads. However, he says that for HIV education to have a lasting impact, all schools must be engaged and the government should make HIV education compulsory.

Childs Rights Programme Coordinator, Thakanyane Motsamai, admits that her organisation has not yet reached primary schools where many youngsters lack basic information about HIV and AIDS.

“Schools are an excellent point of contact for young people – almost all young people attend primary school. While they are there, they expect to learn new information, and are more receptive than they might be in another environment,” says Motsamai.

Thabiso Matlosa, a member of Itekeng Basotho support group, says one of the prime barriers to HIV education in primary schools is culture. This is especially difficult in remote areas where children like Lineo live.

“Everything relating to HIV and sex sounds taboo and vulgar in Lesotho. Therefore it is not easy for me to stand in front of the children to discuss this issue. It is better with high school students because they understand English which is easier to communicate with,” says Matlosa.

So programmes should focus on removing the inhibitions of educators, or children like Lineo may find it hard to meet the needs of their HIV positive siblings.

The names of children have been changed.

This is an edited version of an article published by the