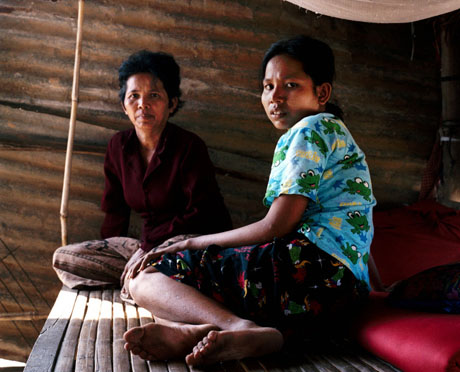 Cambodia | Pov, who is HIV positive, and her mother sit at home. A new study claims that the social isolation and poverty that female migrant workers suffer increases their risk of HIV infection / Karen Robinson - Panos Pictures

Female garment workers in Cambodia who have migrated to the capital are more exposed to a risk of HIV infection because of the changes in their social and economic circumstances, a new report claims. The report, published in this month’s Women’s Studies International Forum journal, looks at the social and economic factors that affect HIV rates among migrant Cambodian garment workers. Health care programmes need to take the factors that create this risk into account, the study recommends.

The report focuses on women who have migrated to the capital, Phnom Penh, from the surrounding countryside. The study suggests that it is the change in the women’s social and economic circumstances, not the act of migration per se, that increases their vulnerability.

“Although rural-to-urban migration is known to increase HIV risk, little research has been done on Cambodian migrants,” says Dr Gail Webber, an assistant professor of family medicine at the University of Ottawa, Canada, who co-wrote the report. “This research contributes to documenting the multiple factors that affect migrant women’s vulnerability to HIV.”

Cambodia has one of the highest prevalence rates of HIV in Asia and an increasing number of HIV positive Cambodians are women, according to the study. The researchers surveyed 358 health care providers (doctors, nurses, midwives, pharmacists) in Phnom Penh who serve migrant garment factory workers. They were asked about their knowledge of and attitudes towards HIV and to what extent they ask patients for their sexual histories. In addition, the researchers interviewed 20 garment factory workers, three government officials, five NGO workers and held two focus group discussions with 13 health care providers. The researchers worked in collaboration with local researchers, Phoumy Ouch and Mora Gibbings.

The interviews revealed that “almost universally” the women migrated to the capital to provide financial support for their families. Most of the women interviewed said that migrating from the countryside was a huge change. Several women said they wished they had been able to complete their education but had no choice but to support their families.

Typically, garment workers earn around US$60-70 per month from the factories, but often do not have enough to live on because they send so much home.

One migrant woman told researchers: “I send 50 per cent of my salary to my mother and I keep the rest for household expenses: electricity, water, and also for eating. The money is not enough.”

The study found that some of the garment workers look for other forms of employment to make ends meet.

“The women need money to support their families, thus they may be more prone to engage in sex work, either formally or informally, with a partner who would support them,” says Dr Webber.

Because they are so far from home the garment workers do not have normal social support networks, leaving them vulnerable in the capital, the researchers found. Some of the interviewees told the researchers that sometimes the new friends the women make among other migrant colleagues encourage them to pursue sexual relations with local men, known as “sweethearts”.

One government official said: “When she [a garment factory worker] sees other women with boyfriends, she thinks ‘Why I can’t I have a boyfriend too, and get a lot of money and gifts?'”

Cut off from family ties

Dr Webber told Panos: “As the women are away from their families, the social pressure for young Asian woman to remain celibate until married is not as strong.”

According to the report, Cambodian gender norms and relations are “key to understanding the vulnerability of migrant Cambodian women to HIV”. The paper cites Judy Ledgerwood’s 1990 study, which suggests that “the whole family’s reputation is dependent on the maintenance of virginity in the daughter”.

Having left the protection and control of their families in the countryside, the new report found young women were able to develop relationships between local men.

The report suggests these “sweetheart” relationships are often transient as the men “moved on when their interest in the women lagged”, which can have a damaging effect on the women’s self-esteem. Cambodian culture places a high value on preserving a women’s virginity until marriage. As one participant in the focus group said: “when a woman loses her virginity, she feels she has no value, and then she may become an indirect sex worker”.

The study found that while the Cambodian government’s “100 per cent condom use” policy has been effective in brothels, it has not had the same impact on other sexual relations.

“While the factory health education programmes continue to teach migrant garment factory workers condom negotiation skills, such skills are not useful if women are not permitted the power within their sexual relationships to use them,” says Dr Webber. “Interventions with couples and men would be a better use of programming resources,” she suggests.

The report calls for policy makers to ensure health care becomes cheaper and easier for migrant workers to access.

“Migrant women need clinics staffed with skilled health care providers located near the factories. Such clinics should have policies that are particularly supportive to garment factory workers such as reduced costs and means for the workers to move to the front of the queue to be seen expediently,” Dr Webber concludes.