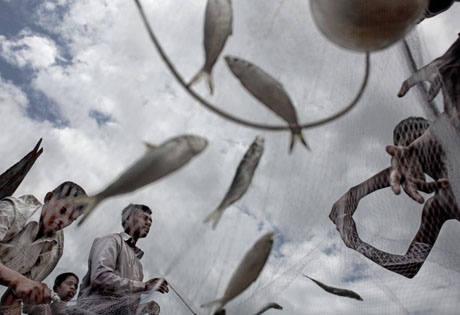 More than 500 million people rely on fishing to make a living yet there is little information about how their livelihoods are affected by climate change, according to researchers in Malaysia. A new report by the World Fish Center in Penang, Malaysia, now aims to fill this research gap.

According to the study, current discussion about the impact of climate change on fisheries tends to focus on how it will affect fish distribution and production, with little regard for the impact on people’s livelihoods.

“This review reminds researchers and policy makers that climate impacts are not only about ‘more or less fish’,” says one of the authors, Dr Marie-Caroline Badjeck, a post-doctoral research fellow at the World Fish Center.

The report, published in this month’s Marine Policy journal, aims to influence the research and policy agenda, stresses that while fishermen have historically had to adapt to change in weather and climate the “current rates of change are historically unprecedented”.

In order to assess the impact of climate variability and change the researchers looked at a range of factors that affect people’s livelihoods. These factors include labour, availability of fish, social, financial and access to boats, fishing and equipment. “Climate change not only affects the “natural” capital fishermen rely on [such as fish] but also other assets, such as social, financial, physical and human,” Dr Badjeck argues. One example of the effect on “human capital” is the potential health impact of El- Nino-related events.

According to the report, El Nino events (which are characterised by prolonged warming or cooling in Pacific-Ocean surface temperatures) also increase the incidence of malaria and dengue fever, especially in South America, Central Asia and Africa where the vast majority of fishing communities live. This leaves a sizeable majority of people who rely on fishing vulnerable to disease, which in turn affects their ability to make a living.

Dr Badjeck argues that fisheries play an important role in nutrition and food security, particularly among the world’s poorest people.

According to the Food and Agriculture Organisation, 2.9 billion people rely on fish for 15 per cent of their animal protein intake. Dr Badjeck also cites a World Fish Centre report which claims that 73 per cent of people who rely on fish for protein live in poor and food deficient countries. Therefore, she argues, protecting fisheries is vital for the health and well-being of some of the poorest people on the planet.

The report argues that fishing communities should be included in ongoing climate policy discussions. Ways to do this include focusing on adaptation strategies.

“People only like to talk about the negative impacts,” says Dr Badjeck. “This review also talks about harnessing opportunities brought about by climate change.”

The report argues that in certain cases El Nino events have actually improved the livelihoods of fishermen. The researchers cite Peru’s El Nino event in 1997-98, which increased the local scallop population. By switching from traditional nets to diving methods the report notes that opportunistic fishermen dramatically increased their profits from the ‘scallop boom’ as well as being able to fish for the more tropical species, such as shark and mahi-mahi, not normally found in those waters.

The report calls for additional funding for new technologies to help fishermen adapt to climate change and diversify their livelihoods. However, the report stresses that any new funding should not be diverted from current development aid as this is vital for attempting to alleviate poverty and create sustainable livelihoods.

“The ultimate goal [of the research] is to influence the research and policy agenda to show that fisherfolk will be impacted in complex ways by climate change,” says Dr Badjeck. “The ultimate benefit for fisherfolk is an increased awareness of the issues at stake, resulting in a more targeted research approach and policy development,” she concludes.

Title: Impacts of climate variability and change on fishery-based livelihoods