You are here: Home » Blogs & features » Print features » Fishing for a living

Fishing for a living 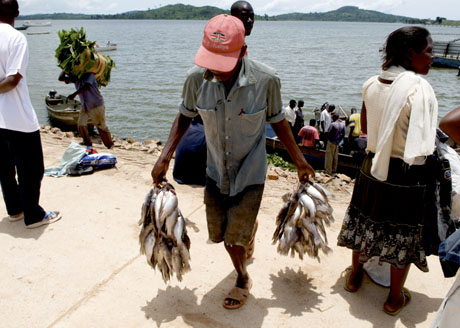 Fishermen and fish traders at the Ggaba Landing site on Lake Victoria. Fishing is a vital industry for Uganda but fishermen are struggling with rising costs of living / Andy Johnstone - Panos Pictures

Who is responsible for relieving poverty in Uganda’s fishing communities? Is government investment the answer, or should fishermen try harder to help themselves?

In the wee hours of the morning, Emmanuel Nsubuga wakes up near the chilly shores of Nakiwogo fish landing site on Lake Victoria. After 18 years as a fisherman a natural reflex tells him it is time to seek his daily living, in the hope of putting food on the table by the end of the day.

He begins at 5am by collecting the overnight catch. By 7am, fish dealers are clamouring for his catch and by ten he has sold nearly everything. He can’t enjoy his free time but must stay at the lake until evening when he lays his nets for the next morning’s catch. “This is my livelihood; I have to stay here,” he says.

Nsubuga is not in this trade by choice. He wanted to be a construction engineer, “I joined fishing because I wanted to make a living after my father failed to raise fees for my education,” he says.

His earnings are above average for a fisherman. At between 20,000 (US$10.40) and 13,000 (US$6.70) Ugandan shillings (Shs) a day, he earns more than a primary school teacher. Many newcomers to fishing are not allowed to lay their own nets in the lake but instead assist established fishermen. Nsubuga, who employs three men to work on his boats, says he still struggles to make ends meet.

Fish is off the menu

At dinner time, his family of eight gathers around a tray each of posho (maize) and mashed bananas with a plate of beans. Conspicuously missing from the menu is fish, the family’s major source of income. “I do not have the luxury of bringing fish home,” says Nsubuga. “A fish brought home is Shs3,000 (US$1.60) lost; I would rather buy a kilogramme of beans at Shs1,200 (US$0.60) and use the rest to buy household essentials such as soap and salt.”

The increased European demand for premium fish such as Nile perch means the local market makes do with smaller fish such as mukene (silver fish), or small tilapia which are not suitable for industrial processing.

Uganda earns Shs266 billion (US$140 million) annually from fish exports but Lake Victoria is still strewn with examples of people like Nsubuga who, despite years of fishing, find it hard to take care of their families. He is just one of the estimated 700,000 who struggle to make a living.

The head of the fisheries resources department at the Ministry of Agriculture, Animal, Industry and Fisheries, Wilson Mwanja, points out that the current market price (US$1.60) for fish is better than it has been for several years. He puts this down to the development of fish processing industries within Uganda. “Ten years ago fish prices were about five times less than what they are today,” he says.

Nsubuga sells his fish to dealers who later sell for between Shs3,500 (US $1.80) and Shs4,500 (US$2.30) to fish processing plants. While fishermen generally agree they now get better prices, they say the cost of living has also risen. “I used to buy a kilo of beans at Shs600 (US$0.30) a year ago but it now costs twice as much,” argues Nsubuga.

Lake Victoria Fisheries Organisation represents fishermen and promotes proper fishing methods. Its executive director Dick Nyeko believes the government could do more to help. Cold storage facilities for instance would mean fish could be stored for longer while fishermen shop around for better prices.

“Improving infrastructure at landing sites and introducing cold storage facilities and good health care facilities can help solve some of vulnerabilities of fishing communities,” he says. “Most fishermen have to sell off their stock immediately to avoid it going bad.”

Despite earning money daily, fishing communities have failed to evolve into sustainable economic groups. Dick Nyeko believes the problem is made worse by lack of access to finance. “The informal nature of fishing business makes it difficult for fishermen to get credit from financial institutions,” he says. “At the lake money is made and lost within 24 hours. To them life is what they live today.”

If fishermen were more organised in groups they would have collective bargaining power to sell to dealers at better prices,” he adds.

The government has little sympathy for such calls for public investment. Wilson Mwanja at the Ministry of Agriculture believes fishermen should help themselves. “Fishermen earn an average income above some professionals but they do not have a saving culture,” he says. “I do not see why the government should build toilets for them. They need to have more responsibility to deal with things that affect their lives.”

The government is looking to improve access to finance by encouraging fishermen to form savings and credit cooperative societies. It is also drafting a law that will make it mandatory for fishermen to contribute to their retirement.

“Fishing is a stressful job that has a high rate of burnout, but because of a poor savings culture, fishermen get out of the job with nothing to show for it and end up becoming a burden in society,” says Mwanja. “A mandatory saving scheme targeted at retirement can do much for the fishing community.”

Saving ‘not an option’

Testimonies from people like Nsubuga tell a different story. He used to save money before he got a family and when he did it was not in a bank but in a small wooden box that he prefers to call a ‘safe’. “I used those savings to buy iron sheets and built a mud house on a piece of land I inherited from my father,” he explains.

Now with eight mouths to feed, there is not enough money left over to save and it is hard to plan ahead. “I cannot save because I use all the money to take care of my family and pay off my bills. I do not earn a monthly salary like some of them [government officials]. I have failed to save because every time I return home there are expenses to take care of.”

At the edge of survival

For a mandatory savings scheme to work, it would need to take into account the informal nature of fishing and fishermen’s nomadic lifestyle, Currently the changing patterns of fish stocks dictate fishermen’s lives.

The government has already registered some fishermen and is licensing them to operate on particular landing sites. “Registration will help us monitor their earnings and compel them to contribute towards development of their communities,” says Wilson Mwanja. “It will also help us deal with over-fishing.”

However, Dick Nyeko at the Lake Victoria Fisheries Organisation believes control and regulation will not work. He argues, “A fisherman is often at the edge of survival and will not comply with government regulation; to him arrest is secondary.”