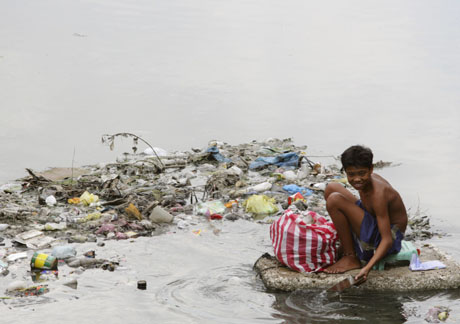 As the Philippines struggles to recover from last week’s devastating floods, a study suggests local authorities in the country are failing to tackle climate change because they are excluded from the debate.

Michael Canares, an associate professor at Holy Name University on the island province of Bohol surveyed 100 local legislators and 30 local officials on Bohol, where fishing, farming and increasingly tourism are the main sources of income. With so many livelihoods dependent on Bohol’s natural resources, climate change could have a disastrous affect on the islanders, Mr Canares says. He argues this makes it all the more important that local people who are likely to be most affected by climate change are included in the climate change debate.

The research, which was presented at the Development Studies Association annual conference in Ireland in September, found that while people in national government and within academic circles discussed climate change, information had not filtered down to the local level. This information is vital, says Canares, as local authorities need to create and implement policy to fight the effects of climate change.

“It is the implicit responsibility of national governments to bring the discussions to the local levels,” he said. He has called for steps to ensure information gets to the people who will be the most affected by climate change to enable them to draw up effective policies.

The study also suggests  the local political system is a stumbling block. Local leaders in the Philippines are democratically elected and only serve a three-year term, so are under pressure to deliver results if they want to be re-elected, he says. Mr Canares believes this leads to a precarious balancing act between achieving short term goals, such as tackling malnutrition, and long-term goals of sustainable development and environmental concerns.

The effects of climate change are expected to hit the worlds’ poorest the hardest, and a sizeable proportion of the population of the Philippines lives on or under the poverty line. “There is a need to prioritise climate change in development planning”, says Mr Canares. “We must also ensure the significant vulnerabilities in local places are identified and addressed in these plans.”

“Manila has not assessed its vulnerability and there is insufficient technical capability to think and respond to the crisis,” Mr Canares said. If the economic hub of the country cannot cope, he argues, the implications for less developed regions of the country are grave.