You are here: Home » Blogs & features » Print features » Flooding: a tale of rich and poor worlds

Flooding: a tale of rich and poor worlds 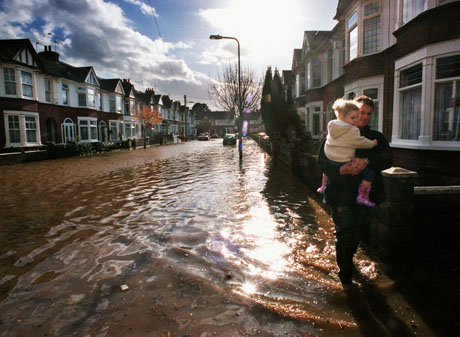 Mozambique is one of the world’s poorest countries, the UK is one of the richest. Both are struggling to respond to a changing climate.

Factory workers hurriedly evacuated after a local beck burst its banks; firemen having to rescue a mother and child after their car got stuck in flood water and thousands of homes being put on flood alert. These were the scenes which greeted the start of the year in the United Kingdom following abnormally heavy rainfall.

Meanwhile, Mozambique, in southern Africa, was witnessing evacuation efforts on a far greater scale. The region’s rainy season had been relentless and four rivers were rising quickly and flooding the Zambezi basin in central Mozambique. As a result 54,000 people were being evacuating from their homes, taking refuge in temporary shelters and an estimated 20 people drowned.

Both countries had barely recovered from more severe floods the previous year. The two countries are poles apart in terms of the world’s resources but they are both struggling to adjust to the common challenge of climate-related disaster.

Mozambique has always suffered from floods. Its valleys are host to five large rivers which flow through several other countries. If it rains in Zambia, for instance, the river will become saturated further downstream. Matters are made worse by tropical cyclones that usually hit three to four times a year.

When the floods hit in 2008, Mozambique was still dealing with tens of thousands of people in temporary shelters. As well as mass evacuations and the destruction of crops, a cholera outbreak had spread among flood-affected communities. However its preparations meant it was much better than might have been the case.

‘The thing Mozambique has already come to understand is they will have to live with floods,’ says British academic Joseph Hanlon and author of the book Mozambique & the Great Flood of 2000. ‘After they learned that, the quality of the organisations got better and better, the monitoring got better and the communication got better.’

The country’s National Institute for Disaster Management understood that one of the main challenges was to convince people they were at risk. Many lives had been lost because people either failed to understand or ignored warnings to evacuate. ‘They need to understand the danger and to be prepared to act in the worst case,’ says meteorologist Filipe Lucio, former director of the country’s National Institute of Meteorology.

Mozambique relies heavily on international support, with 51 per cent of its income coming from foreign donors. It needs US$47 million to deal with flooding in 2008 – of which only US$8 million was available at the beginning of the year. But it is anxious to limit its dependence on international governments and aid agencies.

During its 2008 floods it tried to develop a self-sufficient approach and the government refused to issue an international appeal. ‘If we launch one, it will be because we have exhausted all our local possibilities,’ said Paulo Zucula, the director of the National Institute for Disaster Management.

One of the most successful measures adopted in 2008 was the formation of risk committees, groups of citizens along the main rivers which were trained to keep people informed about flood risks and to act as soon as a flood warning was issued. ‘The forecasting now is quite good; you can warn people in the Zambezi river three days in advance so they have time to prepare,’ says Joe Hanlon.

In 2007 flood simulations took place in the provinces of Nampula, Gaza and Sofala. Because of that, the response to the recent floods was far better than on previous occasions, according to Belarmino Chivambo of the Disaster Management Institute. ‘The committees helped themselves and each other to evacuate people without waiting for government intervention. This shows how much more organised they are.’

In a poor country being self-sufficient involves making the most of the available resources. That’s why Mozambique focuses on popular organisation, ‘You have to decentralise a lot in a country like Mozambique, since the floods will take place in every single area, and local communities will have to deal with it to some extent by themselves,’ says Hanlon.

He says that Mozambique’s popular organisation approach means it is better equipped to cope with adversity – and able to teach other countries. ‘Mozambique has a really good organisation,’ he says, ‘they are prepared for what is coming. Mozambique, with less resources and faced with worse conditions, seems to do better than UK.’

The UK is the fifth richest country in the world. Its average weekly wage is the same as an average Mozambican’s income for an entire year. Its budget for dealing with floods is about one billion dollars a year and is expected to rise to about US$1.5 billion by 2010.

However, when the country was flooded in 2007, it was caught off guard.

That summer the country faced unprecedented seasonal rainfall – the wettest May to July period in 250 years – and the highest river levels in some places for 60 years. More than 55,000 homes and business were flooded, 13 people died and tens of thousands were displaced from their homes in the greatest number of search and rescue missions since World War II.

According to a review written by Sir Michael Pitt, chairman of the South West Strategic Health Authority, there was a general feeling of ‘it will not affect me’ that shows the limited awareness and limited engagement of the British public in preparedness planning. For most people the floods of 2007 came as a shock according to the Pitt review. ‘Most people had never experienced flooding like this before, and they did not know how to react,’ says the report.

The biggest challenge for those facing flooding in the UK is not rivers bursting their banks, but the poor drainage of surface water in built-up areas.  Investigations of the UK’s 2007 floods showed that two thirds were caused by drainage system problems and there is no warning system in place for that.

‘People who live by the rivers are far more prepared because they can get flood warnings. But with drainage problems, they cannot do much,’ says Mary Dhonau from non-profit organisation, the National Flood Forum. Meanwhile the government’s Environment Agency has warned that an effective warning system for households, streets or communities will require much more accurate weather forecasts.

Such a system is both costly and hard to set up. ‘It is therefore unlikely that a household-level warning system for flooding caused by run-off from heavy rainfall will be practical in the near future,’ their report reads.

Progress has been made. During the floods of January 2008, local governments responded more quickly. In the flooded town of Worcester, there was a rapid dispatch of flood barriers along the M5 motorway. And when the river of Upton-upon-Severn burst its banks, defences prevented it flooding the town centre.

Mozambique’s flood preparedness has relied heavily on popular organising, while in the UK, the private flood-protection industry has expanded to meet demand from consumers. Companies are selling devices such as floodgates for front doors, instant seals for airbricks or expandable barriers which can cost hundreds of pounds. But for those trying to insure themselves against flooding, costs have risen.

Mary Dhonau believes the British public still haven’t completely grasped that floods are here to stay. ‘A lot of people think intense floods are a one-off when actually the events of 2007 tend to be more and more regular.’

Looking at the wealth gap, one might think the equation is easy: the UK has what Mozambique lacks. This is true when we look at the money available to spend, but less clear when we talk about coping with a changing climate.

Mozambique, in spite of its enormous challenges is learning rapid lessons from its previous floods. The UK meanwhile, with its vastly superior resources, is taking its time to adapt.