You are here: Home » Blogs & features » Print features » Food versus fuel in the Philippines

Food versus fuel in the Philippines 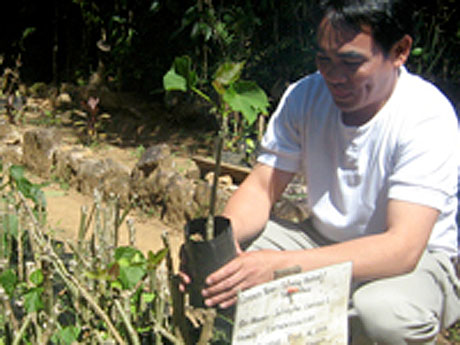 The Philippine government wants farmers to plant crops for biofuels on a vast scale. But could the quest for green energy create food shortages?

Growing world energy demand, the insecurity of long-term supply and the consequences of fossil fuel use for climate change are driving governments to look for alternatives. To meet rising energy needs, many countries are promoting the production and use of biofuels – energy extracted as a gas, liquid or oil from plants.

Derived from food crops such as corn, sugarcane, soybean, oil palm and sugarbeet, biofuel production has been on the rise in recent years. It is seen by many as a clean form of energy in an era of soaring oil prices and concerns over carbon emissions.

Jatropha, a plant originating in Central America that grows wild in many developing countries, including South Africa, India, Thailand, Malaysia, Indonesia, China and the Philippines, has suddenly found itself at the centre of a new phase in the world’s alternative energy boom.

In the Philippines, there is currently much hype surrounding its production as a source of renewable fuel. Philippine President Gloria Macapagal-Arroyo has signed into law the Biofuels Act which mandates a minimum one per cent biodiesel blend and five per cent bioethanol blend in all diesel and gasoline fuels. To meet demand, the government is aggressively pushing for the cultivation of jatropha, believing it to be one of the best candidates for future biofuel production.

The government, through the Philippine National Oil Co.-Alternative Fuels Corp, is now looking at some 1.2 million hectares for jatropha production in the southern island of Mindanao. It is also busy identifying more than 400,000 hectares of land for private sector investments.

Jatropha curcas is a drought-tolerant non-edible shrub. It produces fruits the size of golf balls which contain oil that can be converted into biodiesel, a substitute for fossil fuel.

According to Rhandy Tubal, research specialist at the Department of Environment and Natural Resources in Cordillera, farmers who have received training to grow jatropha are enthusiastic about the crop. He says the cultivation of the plant could provide the first step out of poverty for Filipino farmers and claims that, depending on the density of the plants, each hectare can yield jatropha oil worth nearly US$2,000 a year.

“We are in the initial stage of planting jatropha and we are very optimistic that it is indeed one of the best candidates for biofuel. Farmers are very excited about its production,” Tubal says, adding that only idle land would be used for jatropha planting to avoid competition with other crops.

However, research from Australia suggests the plant will need more intensive inputs to produce the oil used for biofuels and it can take several years to develop optimum yields. Furthermore, some experts warn the move may use up precious land that could be used to grow food and may eventually hurt subsistence farmers. Concerns over possible future food shortages have generated a ‘food versus fuel’ debate in the country.

Rachel Smolker, a biofuels specialist and research biologist for the US-based environmental group the Global Justice Ecology Project, fears the global rush to switch from oil to energy derived from plants will drive deforestation, push small farmers off the land and lead to serious food shortages and increased poverty unless carefully managed.

“If food sources become biofuels, that may lead to shortages and raise prices. The promotion of biofuels will have an impact on local food security as some fuel crops are also food crops,” Smolker says.

Her view is echoed by Philippine Senator Miriam Santiago, author of the 2007 Biofuels Act, who has sought more governmental oversight of biofuels development, saying that backing biofuels could adversely affect the country’s ability to produce its own food.

“Biofuel is land-based and will eventually compete with food. Because the Philippines has a small land area, biofuel production will tend to encroach on food production. Corporations are already searching for millions of hectares for jatropha alone. We have to step on the brakes and decelerate,” she says.

Santiago thinks the Philippines “will not prosper by betting only on the biofuels option”. She says the government should explore other alternative energy sources such as wind, solar, hydropower, geothermal and biomass.

But the Philippines’ Environment Secretary Lito Atienza has defended the government’s massive jatropha cultivation for the biofuels programme, saying it will not imperil the country’s food supply.

“Jatropha is a non-food crop. So the issue over food versus fuel is not a debate about this crop. Jatropha grows on idle lands, particularly denuded mountains and forests, unfit for food crop cultivation, so it will not compete with land used for the production of food,” Atienza says.

Widespread jatropha cultivation is fairly new in the Philippines. It is only recently, with the news that jatropha can be a source of biodiesel, that people have started planting larger areas of the crop.

All the more reason, according to Dr Emil Javier, president of the National Academy of Science and Technology, to check out its credentials. “The Philippines should do its homework and conduct thorough research on jatropha and see its viability compared with other alternative crops,” he says.

The challenge, believes Achim Dobermann, a scientist from the Philippine-based International Rice Research Institute, is to ensure a balance between food and biofuel production. “There is an urgent need to strengthen policy research in order to avoid decisions that may lead to competition between food and bioenergy.”