You are here: Home » Blogs & features » Print features » From cattle to crops

From cattle to crops 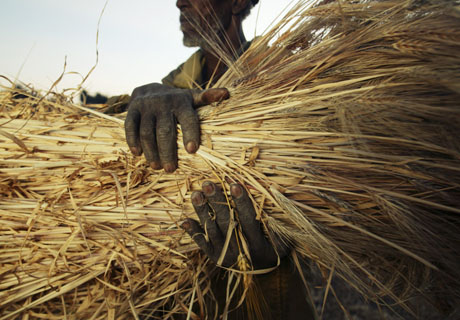 The Boran people in Ethiopia are thought of as a wealthy community of pastoralists and cattle herders. But their lives are drastically changing, and not through choice.

Guyate Burka needed some convincing that there was any point in sending children to school. The 65-year-old admits that none of her older children, all now married, ever attended school.

Like other Boran pastoral women from Siminto Kebele in southern Ethiopia’s Oromiya state, Guyate’s world revolved around cattle and cattle rearing only. It seemed obvious that her youngest son, Dida, would step into the footprints of his older siblings and spend his life following the tails of cattle.

In the middle of darkness

But years of campaigns by the government and other organisations on the importance of education finally did the trick for Guyate and she decided to send Dida to school. “I was very ignorant about education”, she recalls. “I could not see how education could bring any benefit to a pastoral family like mine. I could not see any wisdom in sending children to school.”

Once Dida started his education it felt like a new dawn arising. “It was as if we had lived in the middle of darkness before he went to school,” she says, and adds that she now regrets having denied this chance to her older children.

Covering Dida’s school fees was not an issue. The family of six owned more than 60 head of cattle. This was sufficient to feed the family and pay for his school fees. Guyate’s hopes were high: “I wanted my son to gain a good education and advance himself, so that he could eventually help the family to do even better.”

The hopes were short-lived. In an ironic twist of fate, once Guyate had “seen the light”, disaster began to strike. When Dida reached year seven, a succession of droughts and severe lack of rain led to a steady decline in Guyate’s livestock. One particular bad year of drought reduced what was left of the once proud number of cattle to one. With all but one of her cattle wiped out, Dida’s education hung in the balance.

Like many of her neighbours, Guyate found herself in a position where her traditional lifestyle had to change dramatically if the family were to survive. She was forced to shift from rearing cattle to growing crops. Even this was only possible because her brother could lend her a plough ox.

The future that had looked bright now looks bleak. Guyate feels sad and desperate whenever she remembers the past. “When we had our cattle, our meal consisted of meat and milk products. We never ate crops. Today we can rarely afford animal products in our meals.”

How did this happen?

The succession of droughts and lack of rainfall have had a severe impact on the Boran community. Quite what triggered these changes is hard for people to understand. For many, this is ‘the work of God’. Others draw a connection between the lack of trees and the lack of water.

Dido Qanchora, 67, spent his whole life at Siminto. He remembers what the environment looked like when he was young. “There was a dense forest in the surrounding areas,” he says, pointing to a place which has turned into barren land with hardly any vegetation at all. “In those days we had enough rain and water sources were close by. Now we don’t have those trees and we don’t get enough rain.”

The nearby water sources have dried up. Every morning, women set out on a five-hour walk to fetch water for their families. Thirst has become a constant companion for people in the district.

Some of the damage to the forest was man-made: Dido Qanchora blames residents including himself for contributing to the decline in trees. People started chopping down trees in order to produce charcoal, he says. But, he stresses, this practice was only taken up recently in Siminto, and was born of necessity. With the sharp decline in animal productivity, selling charcoal was a source of income where nothing else was available. But the chopping down of trees has led to even fewer resources for the pastoralist community.

Dido Doyo is a government development worker in Siminto, trying to preserve natural resources. “Deforestation is the major problem in this area”, he says. “The places which were covered by forest are now all becoming deserts. There are no more juniper trees which used to cover the land in the past. There is a strong wind most of the time and a shortage of rainfall. This place is being transformed into a desert.”

For him, there is still a lack of awareness of how gravely the practice of chopping down trees for charcoal contributes to the overall environmental damage. Overgrazing, he says, exacerbated the problem as well.

During severe drought, large numbers of Boran cattle have died due to lack of pasture. Research conducted by Panos Ethiopia in 2002 shows that animal mortality rates reached up to 80 per cent in the worst years of drought.

Many Boran have taken up crop-growing while trying to keep some cattle. Jarso Qoye, 55, a father of 13, is one of them. He has, in recent days, become an agro-pastoralist. Apart from rearing livestock, he produces maize, barley and wheat on his farm.

Despite his best efforts his income does not enable him to send more than two of the 13 children to school: “The children we send to school need food and incur other costs”, he says. “We also need the children to take care of the farm and the cattle. That’s why I can’t send the others to school. I can’t afford it. Life is a struggle.”

Dido Qanchora managed to prevent most of his cattle from dying by taking the animals further and further away from traditional grazing grounds, but he could not prevent the decline in their productivity. He is concerned that environmental degradation has done far more than damage the Boran’s traditional lifestyle of cattle herding – he feels it has challenged all their cultural and social values.

One of the main strengths of the community, explains Dido, was the way people looked after each other. “Our society had a long tradition of contributing cattle and animal products to the poor in the community who were unable to sustain a living. We helped them until they became self-supportive”, he explains. “We used to assist the children and wives of poor families. These days, however, people find it hard to feed their own children, let alone help others.”

The Boran had a reputation for being very welcoming and generous. It is customary for a Boran to offer a glass of milk to any visitor whoever he or she may be. When approached by this writer for the interview, Dido Qanchora’s first reaction was embarrassment: “I am not generous enough for you today, I don’t have enough milk to offer you.”

In Ethiopia, pastoralist communities such as the Boran account for 12 per cent of the country’s population. Their communities cover over 60 per cent of the country’s land area. Until quite recently, pastoral life in Ethiopia was not considered a lifestyle but a problem. There were (and at times still are) disputes and clashes for grazing land. Pastoralists remained a marginalised group, given little recognition and attention by successive governments and often seen as ‘second class’ citizens.

Nowadays this attitude is changing. Development programmes for pastoralists are supported by the government in various pastoralist areas of the country. There is even a national ‘Pastoralist Day’. The last one, held in January 2007, emphasised that much remains to be done to bring the pastoralist community on to an equal footing with other beneficiaries of development projects in the country.

But many pastoralists find that now that they have finally found recognition, their very lifestyle is endangered due to environmental degradation. Can this trend be reversed? In Siminto, government development worker Dido Doyo says he is hopeful that some of the depleted resources could be restored if raised awareness of these issues in the community led to certain changes in behaviour. But, he says, the restoration of resources might take a very long time.

For Guyate Burka, who lost all but one head of cattle, the future is uncertain. Whether the shift from rearing cattle to growing crops will help her keep her family going will depend on sufficient rainfall – and lately there has not been much rain. But one thing is certain: her son Dida’s short-lived education will have to come to an end. He will leave school.