You are here: Home » Blogs & features » Print features » From famine to feast

From famine to feast 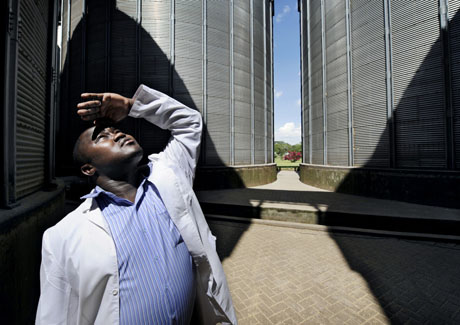 A manager, at Lesiolo Grain Handlers in Kenya, looks up at the grain silos. A new lobby group is trying to encourage Arican governments to support farmers who grow staple foods, such as grains, rice and beans, rather than cash crops like tea, cocoa or cof

No more hunger, plentiful cheap food and small scale farmers living off the fat of the land. African activists say a continent self-sufficient in food is well within reach. But will this vision create long term problems for the continent’s poorest farmers?

Africa’s public image as a continent plagued by famine could become a thing of the past, says an influential group of African former heads of state, agro-scientists, academics and civil society activists. With the population of Africa expected to increase to 1.5 billion by 2020, a lobby group launched a bid in Cape Town this June, aimed at persuading governments on the continent to support the creation of regional “bread basket zones” in areas with good soil and high rainfall. The coalition is made up of 37 former African heads of state, Kenya-based NGO ‘Alliance for a Green Revolution in Africa’ (AGRA) and South Africa-based think tank ‘African Monitor’, founded by Cape Town’s former Anglican Archbishop, Njongonkulu Ndungane, an outspoken critic of the World Bank and International Monetary Fund’s practices in Africa.

With the continent currently importing up to 50 per cent of its food, the bread basket strategy aims to move African farmers away from growing cash crops which most people don’t eat, like cocoa, tea and coffee, and towards farming staple foods such as rice, sweet potatoes, cassava, maize, and beans.

The strategy marks a departure from the economic policies of the 1980s and 1990s when the World Bank’s Structural Adjustment Programmes directed African governments to cut agricultural subsidies and encourage small scale farmers to grow cash crops for the export market. The high cost of fertilizers led many small scale farmers to fertilise their cash crops only, leading to a drop in the production of staple foods. Recently, the shift to biofuels, speculation in the commodities market and the rising cost of energy has compounded the problem, leaving countries like Uganda to face sharp price increases of up to 65 per cent for maize, their staple food.

Africa will feed itself

Dr Akin Adesina, AGRA’s Vice-President of policy and partnerships, says African countries could soon be feeding themselves instead of starving if governments invest in agriculture and encourage rural agro-dealerships. The Ghanaian government will formally launch the ‘bread basket transformation strategy’ project this November. The project aims to quadruple the amount of rice grown on  400,000 hectares of low lying land in Ghana’s northern region “simply by using the right kind of seeds, the right kind of fertilizer and better water management”, says Dr Adesina. Success would mean Ghana no longer spending US $500 million a year importing rice, but able to satisfy domestic demand and export rice to the rest of the world, raking in foreign currency instead. He says Mozambique’s northern region is also a natural breadbasket, where small-scale farmers are already having some success with a newly developed ‘high-yield’ orange flesh sweet potato containing high levels of vitamin A.

Another popularly cited success story is Malawi, which was highly dependent on food aid until its government introduced a $60 million subsidy for maize production in 2004. The country immediately became a net exporter of the staple, and food prices dropped by over 30 per cent. Experts agree that Malawi remains a poor country, but its people are no longer starving. “The truth about the agricultural model anywhere in the world is that agriculture’s relationship with the rest of the economy justifies some form of subsidisation,” says Professor Mohammed Karaan, South Africa’s leading agro-economist, and Dean of the Faculty of AgriSciences at Stellenbosch University.

Dr Adesina goes further saying that surpluses of staple foods tend to drive down food prices and lead naturally to the development of regional markets. He says previously starving Malawi has proved his point by giving maize aid to neighbouring Lesotho and Swaziland.

But a group of African civil society activists organising under the banners of GRAIN, and the ‘Community Alliance for Global Justice’, a US-based NGO, beg to differ. GRAIN says the increased yields promised in AGRA’s ‘bread basket’ areas will come at a price and the involvement of big business in increasing yields could undermine food sovereignty rather than promote it. They cite ‘green revolution’ tactics used in Asia in the 1970s, which employed large amounts of fertilisers and chemical pesticides, often leaving land degraded and leaving farmers dependent on pesticide manufacturers and seed suppliers.

Kenyan environmentalist and author Mukoma wa Ngugi explains, “The fear amongst food sovereignty activists is that because AGRA has the active support of corporations such as Monsanto and Cargill, it will be a Trojan horse for genetically modified seeds.” He fears the ‘bread basket’ strategy will lead to African farmers becoming “dependent on seeds that cannot be replanted into several generations, unable to afford the pesticides and highly indebted to lending banks and ultimately [ending in] despair”.

AGRA and other ‘bread basket’ lobbyists such as Warren Nyamugasira, managing director of African Monitor point out  AGRA has never used or promoted GMOs. “The main reason African Monitor aligns with AGRA is that it promotes research and technology developed by African scientists,” says Nyamugasira. “We can hold the biodiversity for the world but it is of no use to us if we cannot deploy it to feed ourselves.  Organic farming alone is not feeding Africans, of whom 300 million go to bed hungry every night.”

The environmentalist wa Ngugi is not sure the debate hinges on whether Africa should go organic. “This is about the future of African food supply, and whether it should be corporatised or democratised,” he says, “That something as fundamental as food can be in the hands of corporations at a time when the world is reeling from unregulated corporate greed, is alarming.”