You are here: Home » Blogs & features » Print features » From poacher to gamekeeper

From poacher to gamekeeper 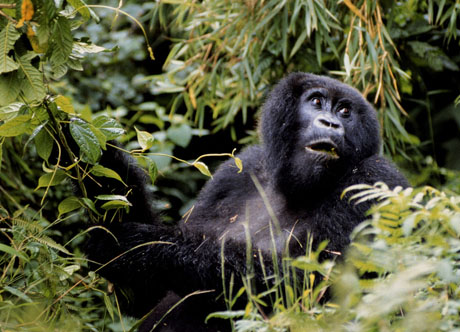 When a gorilla poacher told Rwandan conservationist and businessman Edwin Sabuhoro, “You’ve eaten, you’ve got a job that pays you and that’s why you are chasing us,” he stopped to think about it.

When a gorilla poacher told Rwandan conservationist and businessman Edwin Sabuhoro, “You’ve eaten, you’ve got a job that pays you and that’s why you are chasing us,” he stopped to think about it.

He realised the poachers had no other source of income, and that tourists were prepared to pay US$500 just for permission to view one of the central African country’s rare mountain gorillas.

So he invested about three million Rwandan Francs (about US$5,200) in a plan to turn the poachers into gamekeepers. And that’s why many former gorilla hunters are now ardent conservationists.

“I was a real animal,” Barora says of his 30 years as a hunter in the volcano forest in the country’s north-west. “We used to run in the bushes like animals and hide from park guards, who were always trying to arrest us. My hair grew long and I and my fellow poachers smelt so strange that people would run away.”

He sold elephant ivory and his family ate wild meat.

Now, aged 64 and sitting in the Iby’Iwacu (literally: “Home-grown”) Cultural Centre, a tourist site set up on the edge of the park to provide alternatives to poaching, Barora says he would be the first to arrest poachers if he saw them.

“I don’t have the desire to go back to the forest to look for something to eat. My food comes from here,” he says, pointing to the centre’s facilities. “I use the money they pay me to buy food for myself and my family.”

Iby’Iwacu got underway in 2007, when Sabuhoro recruited about 1,000 people from the forest perimeter into an anti-poaching association. He knew the community because a few years earlier – as a park worker for Rwanda’s Tourism and Wildlife Conservation Office – he had disguised himself as a businessman in order to act as a mediator between poachers and police.

Sabuhoro helped develop farming activities and set up handicraft and other small-scale businesses to service the tourists who visit and stay to at the centre, which is owned by the villagers.

Visitors pay more to spend more time with the villagers. They enjoy the do-it-yourself activities, such as helping dig up potatoes, fetching water, collecting firewood and cooking a meal. They can also do a “community walk”, visiting a local church and talking to local elders and leaders.

There’s a replica of a royal palace, four traditional mud huts where visitors can sleep, cook and wash. A local healer is on hand to demonstrate medicinal herbs.

Ex-poachers dance, drum and shoot arrows to showcase Rwanda’s traditional way of life – for a US$20 fee. Barora is one of the performers.

“I have to admit that when we first came in I was very afraid that it would be very artificial and staged,” 50-year-old Georgia Paul from the United States told me after a holiday there with her husband. “But I think that the important thing is understanding why they are doing it,” she adds. “As long as you know that there’s a purpose to it, then it is not artificial – it’s much more sincere.”

About 100 tourists a month visit the centre, mostly from Australia, Britain and North America, and it’s clear from my interviews that a major attraction is the idea that the people who would once have been destroying the animals are helping conserve them.

“We saw one gorilla today missing a hand because of the traps,” said Georgia’s 61-year old husband, Michael. “If we can show the people a better way to live, to be happy and productive, a lot of things will change. We have to make it profitable for them – they have to be able to make a living doing this.”

The income from the cultural activities goes to the village fund: 40 per cent is paid to the performers, 60 per cent is invested in health insurance, high-yielding seeds, education, and developing small-scale businesses. Sabuhoro’s travel agency, Rwanda Eco-Tours, advises the association’s managers and brings tourists to the village.

Iby’Iwacu and the 18 other ex-poacher associations involved in tourism in Rwanda have helped cut poaching by 60 per cent, according to tourism officials.

Sabuhoro also points to the strong personal impact made by this form of ecotourism. “Tourists have developed attachments with people [the villagers], which they don’t do with the gorillas,” he says. “They write back to ask how everybody is doing.”

More importantly, he observes, the Iby’Iwacu initiative is helping build a poaching-free generation of people living around the park and socialising with the tourists, “a generation that will not leave its children and the future generation to starve”. It has not fully achieved this aim: about five per cent of Iby’Iwacu members are believed to be still poaching.

Innocent Twagirimana, the association’s president and a guide at the cultural centre, says that his father was a poacher “and I became one of the members of this group because they knew my father was one of them. Now I feel good because I get my salary at the end of the month.”

At Euros 225 million a year, tourism is Rwanda’s top foreign exchange earner – not bad for a country that 15 years ago was torn apart by the last major genocide of the 20th century.

Drocella Nyirabureteri, a 47-year-old mother of three who spends about a half of her working hours at Iby’Iwacu, has a more human take on tourism revenues:  “I get money to buy food when tourists buy my baskets,” she says – and she compares the death of an animal in the park to the death of a baby because, she points out, it is thanks to the forest animals that her community has a tarmac road, tapwater and classrooms.