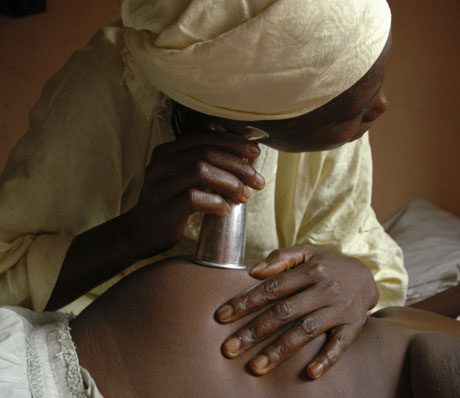 Uganda’s traditional birth attendants are trusted by women across the country to deliver their babies. With proper training, could they also help prevent mother to child transmission of HIV?

Earlier this month I asked Uganda’s minister of state in charge of primary health care, Dr Emmanuel Otaala, why traditional birth attendants – who deliver tens of thousands of babies each year – seem to play little part in HIV awareness and prevention or in the prevention of mother-to-child transmission of the virus.

It had been on my mind since I met an experienced traditional birth attendant (TBA) who told me she last attended a workshop on HIV counselling in 1992. Hasifa Nalwoga Ssenkayo is 52 years old and with two years of schooling behind her has been working as a birth attendant since 1976.

A mother of ten, Hasifa’s workplace has 14 make-shift beds. She operates in a crude environment where everything is improvised. She knows something about HIV and advises women to go for HIV tests after she delivers their babies. But from her answers to some of my questions it was clear she was confused about how the virus could be diagnosed and would benefit from more training.

In fact Hasifa had asked for just that. She told me she had been to the nearest general hospital looking for collaboration with the medical team to improve her services “but failed to get through”.

Dr Otaala explained that the government does not see a role for TBAs in HIV prevention. In fact it wants to stop TBAs from even delivering babies because they are “not recognised trained health workers”.

“They are only going to be part of the healthcare system by identifying expectant mothers and forwarding them to the appropriate healthcare facility,” Dr Otaala told me. “We cannot realise the Millennium Development goals if TBAs are delivering mothers in the villages.”

If this comes into practise, it will represent a huge shift for many women. Recently I met Nakku, a 22-year-old patient at Mulago National Referral Hospital in Kampala. She had given birth three days earlier at her local TBA’s place.

Nakku discovered she had the virus that causes AIDS on her first antenatal visit. After the second antenatal visit, she switched to her nearby birth attendant for other check-ups, although she had still hoped to deliver at Mulago.

She had been registered for the prophylactic nevirapine drug that stops the transmission of the HIV virus from mother to the child. It is given to the mother during labour and to the baby at birth.

“I had been told by the nurses here at Mulago that I would have to deliver from here, but at the time the contractions came I had no money to hire a cab, and it was in the middle of the night,” she told me.

Nakku regrets that she may have infected her baby. She came to the hospital for her baby’s immunisation and luckily there is still a chance for the baby to benefit from nevirapine.

There are many women in Nakku’s position. Studies have shown that worldwide, every year, one million women infected with HIV deliver babies without professional help. The majority of such women are in rural areas where TBAs work.

Hasifa had told me that many women who discover their positive HIV status at a local hospital are too scared to return. Such fear and denial undermines Uganda’s policy that all pregnant mothers undergo prevention of mother to child transmission (PMTCT) to stop the spread of HIV to newborn babies.

So before the government gives up on TBAs, is there more they could do to engage them in fighting HIV? And could they have done more to educate birth attendants over the years?

Hasifa told me the supervisor from the district hospital usually comes once or twice a year. “Usually [they] sit outside, they move around my structure briefly, sign in my visitors’ book, I serve them something to drink, and then they leave.”

Organisations such as WHO and UNFPA have trained some TBAs, but there are no developed systems for follow-ups, supervision or evaluation. A senior principal nursing officer at Mulago, Nassuna Edith, says the ministry has failed to integrate the work of TBAs into the national health system.

“The ministry has ignored the work done by TBAs. It says TBAs should be supervised by district hospitals. But this also is not being done,” she says.

No wonder that Nakku had no other support from her TBA apart from simply carrying out the delivery. It’s also no surprise that birth attendant Hasifa is expected to do without supervision from her district hospital – or even gloves.

Nevertheless, many of the women I spoke to trust the TBAs and prefer to give birth in their local TBA’s home. They say they are intimidated by health staff at big hospitals, finding them rude and unfriendly.

Nakku told me: “When I was delivering my firstborn, she treated me like my own mother. That is why I was not worried when I returned to her deep in the night with my second pregnancy.”

It is also clear from Nakku’s case that rural women still struggle to get the money for transport to hospitals, even when they are only a few kilometres away.

If birth attendants were fully trained and integrated into the healthcare system, they could be equipped with better knowledge of HIV prevention and to advise women about the drugs that can help prevent their children contracting HIV.

Dr Otaala told me “[TBAs] are going to be referral points but will not deliver babies”. But mothers are perfectly capable of finding health facilities themselves without being taken by birth attendants.

I believe that given the necessary skills TBAs could do so much more to help local communities, rather than reducing their role to rural health inspectors who trek through villages identifying expectant mothers. That would be a more holistic solution.