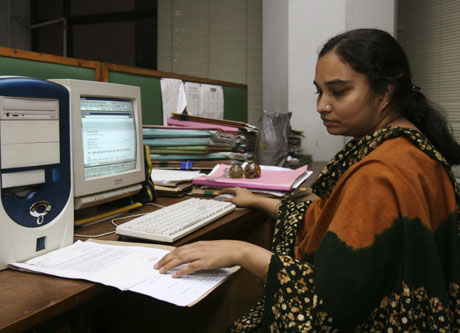 Bangladesh is reforming its land laws and creating electronic ownership records. Going digital is part of the government’s bid to reach developed country status by 2021. It hopes to stimulate the economy, uproot corruption and usher in justice for the landless poor.

Digital Bangladesh is the buzzword of the moment. Between now and 2021 the Bangladeshi government will train 10,000 computer programmers a year and make IT a compulsory subject in all schools as part of its ‘Vision 2021’ programme. It’s all in the hope of reaching developed country status by the 50th anniversary of its independence.

The government is looking to information technology to expand its economy and it has also acknowledged that tightening up the country’s notoriously complex and corrupt land-ownership records is central to any effort to cut poverty. As a result it has launched a flagship scheme to digitise land-ownership records and a digital land survey.

“Everybody should have a roof over their head,” says Rashed Khan Menon MP and chairman of the Parliamentary Standing Committee on education affairs, whose party has been pushing for land reform, “but many millions in Bangladesh, in rural and urban areas alike, don’t have any.” More than 60 per cent of Bangladesh’s population today is landless. In 1947 the proportion was around eight per cent.

Successive governments have failed either to redistribute government land, known as khas land or to cap the amount of land owned by individuals. Those rich enough to bribe officials have illegally bought up government-owned land. In the process, small and marginal farmers became landless village poor, many of them migrating to urban areas to live in slum conditions. According to reports by a Dhaka-based NGO, the Association for Land Reform and Development, forged ownership records are the chief cause of land disputes and land disputes make up around 80 per cent of the country’s criminal cases. The number is even higher in the civil courts.

Nowhere is this more evident than in the tightly-populated capital, Dhaka, where scams are often initiated by property brokers. It is not unknown for a plot of land in Dhaka’s downtown Mohammadpur to be recorded under the names of 30 to 40 buyers.

‘Justice could be bought’

Dipty Roy, a government receptionist, was victim to such a scam. She bought a patch of land at Kanthaldia village on the eastern fringe of the capital in the hope of building a house. She says negotiators forged rival ownership documents to pressure her into selling the land for less than it was worth in order to avoid a court battle. “Losing all hopes for a win in this case, I undersold the land,” she says. She hired a mediator to negotiate with the forger and eventually her land ended up in the possession of a real-estate firm.

“Justice could be bought”, says Taser Mandal, now in his 70s who lives in the northwestern district of Rajshahi. He inherited a land dispute following his father’s death in the early 1960s and pursued it until the mid-1980s, selling off other family belongings to pay for the litigation. Eventually, he lost the two-acre land to his richer contending relations, leaving Taser and his four brothers to live as paupers.

Buyers currently need to visit around ten different government offices to register land ownership, a tangled web in which corruption and confusion thrive. Under the proposed digitised system, all aspects of land administration will be brought under one authority. Land ownership documents will be uploaded to a database with an official electronic signature. “You can have everything on your PC and download and take a printout of the signed document that will be authentic for all purposes,” says Shah Mohammad Akash, Communication and Media Manager for the Access to Information programme of the United Nations Development Programme, which recently piloted a similar system.

Villagers will be able to access the online services through computerised information centres due to be set up in unions, the lowest tier of local government. Already 30 of over 4000 unions across the country are being brought under the network. The government recently signed a Tk 300 crores (US$ 45 million) deal with South Korea for internet networking.

But the computer is not the only tool. Around 40 million people in Bangladesh have their own mobile phones and for the rest there are small call shops in all towns and villages across the country.

Campaigners for land reform are upbeat about the project. Shamsul Huda, executive director of the Association for Land Reform and Development, hopes the digitisation of records coupled with land redistribution will revolutionise local power structures by empowering the poor. “They will be able to get their voice heard,” he says. He cites the success of the Indian system of land documentation in helping to cut corruption.

However, Dr Hafiz Siddiqi, Vice-Chancellor of the private North South University, has sounded a note of caution about the countrywide digitisation project, stressing the need for Bangladesh to manage the system without depending on foreign experts. Writing in the English-language Daily Star newspaper he pointed out major challenges on managerial and mechanical fronts. “If we fail to manage a sustainable digitised Bangladesh with our own resources, a Digital Bangladesh 2021 will harm rather than benefit the country,” he wrote. “Sustainability is more important than starting.”

Admittedly, neighbouring India is much more advanced in information technology. For Bangladesh it’s a herculean task. Nevertheless, officials are optimistic, predicting that in just three years time the nationwide project to reform the land ownership records system will be complete.