You are here: Home » Blogs & features » Print features » HIV headlines give half the story

HIV headlines give half the story 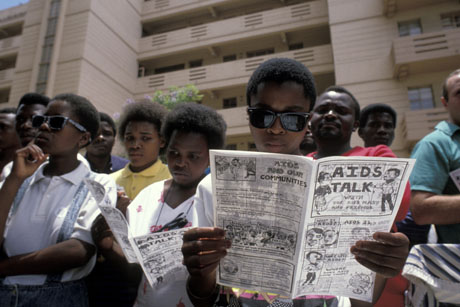 Writing about male circumcision for HIV prevention presents considerable communication challenges. How has the South African press handled it?

Since the World Health Organisation (WHO) officially recommended male circumcision as an HIV prevention method, most articles in the South African print media have referred to the three prominent research trials carried out in South Africa, Kenya and Uganda.

These studies showed that circumcised men are between 50 and 60 per cent less likely to contract HIV during unprotected heterosexual intercourse than uncircumcised men.

Overall, it appears that discussions in South African newspapers conform fairly closely to the WHO’s stance that male circumcision can be an important HIV prevention method.

The South African Press Agency (SAPA), was fairly typical when, for example, it carried a report in 2006 saying “male circumcision could be a promising tool in the prevention of transmitting HIV”, while cautioning that “the procedure could give men a false sense of security and may not protect women from contracting the disease”.

But it is rare for an article to explain how the research data has been gathered or to elaborate on the findings of the studies. According to William Bird, director of the Media Monitoring Project, a Johannesburg-based NGO surveying South African media, this reflects the conventions of most media outlets. “It is very unusual [for South African media] to give any real explanations around statistics, because there is a fear that it’s either too difficult to understand or too boring,” he says.

Women’s voices have largely gone unheard in the coverage. Journalists tend to ignore how male circumcision impacts on women’s ability to negotiate safe sex, for example, or how prioritising male circumcision could have an impact on the resources available for effective female-controlled HIV prevention methods.

There is also little writing on the other potential health benefits for women, such as research showing that circumcision lowers the risk of men getting the human papilloma virus (HPV) that causes genital warts, trichomoniasis and can lead to cervical cancer in women.

Ace Ngcobo, researcher at the Health Economics and HIV/Aids Research Division (HEARD) of the University of KwaZulu-Natal in Durban, believes the limitations in reporting are a wasted opportunity. He says, “Limited and inadequate media coverage of male circumcision as a HIV prevention tool misses out on many opportunities to educate the public. To a large extent, South Africans still don’t know about the advantages and disadvantages of male circumcision.”

South Africa has a history of disagreements between AIDS activists and the national health department. The most prominent example was the health department’s refusal to make antiretroviral therapy freely available in the country until late 2003, following a five-year bitter stand off between the AIDS pressure group the Treatment Action Campaign and the South African government. It was widely covered. However, many journalists and media outlets shy away from tackling topics which touch on culture and religion.

In many communities, circumcision, or the lack of it, is related to rites of passage and religious and tribal identity. Communicating medical knowledge in this context takes great sensitivity, which might make journalists fearful of raising it in their articles. “It is very rare for a journalist to unpack issues around culture, religion or gender, out of what seems to be fear or lack of understanding of the issues,” reckons Bird.

According to Ace Ngcobo, this fear stems from, “not having enough in-depth knowledge of a culture, and also a fear of coming across as being judgmental.” He says, “The public could gain a lot if journalists would explore more in-depth ethnic and cultural issues around male circumcision and HIV prevention”

The debate around culture is an important one, however, especially since studies have shown that HIV infection rates have dropped dramatically in West African and other parts of the continent where circumcision is routinely performed.

There is even less reporting in the South African print media about what is happening on the rest of the continent. Readers hardly hear about massive roll-outs of male circumcision programmes in Swaziland, Malawi, Zimbabwe, Rwanda, Tanzania, Zambia and Kenya, which experts hope will result in a 60 per cent reduction in new infection rates.

Not all journalists reproduce the mainstream medical perspective wholesale. Non-profit news agency Health-e in August 2008, for example, picked up on the “heated debate” about how male circumcision should be promoted, and reported the fear that men might believe they are immune to HIV after circumcision and engage in more “risk behaviour”, such as practicing unsafe sex.

Nor is the fact that research is not communicated often enough and well enough in the South African media, the fault of journalists alone. According to Ace Ngcobo, “If researchers collaborated more closely with the media, they could use the media as an effective advocacy and lobbying tool and ensure that the public hears about latest research.”