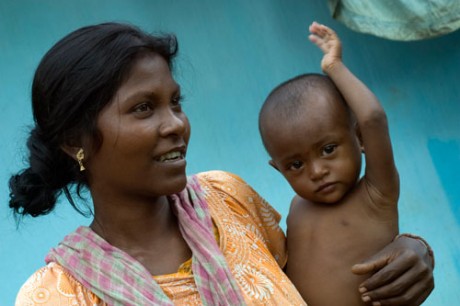 "It's no age to die" says the doctor whose work has helped dramatically cut infant and maternal mortality rates across the states of Jharkand and Orissa. The NGO says its approach – which puts women centre-stage – works even in the poorest areas.

It is just getting light in Chakradharpur, a small village in the eastern Indian state of Jharkhand, as a dozen women from the Ho tribal community gather outside one of the mud houses. Sitting cross-legged on a large jute mat, around half of the women have infants in their arms.

It’s an informal set-up: chicks and hens flutter nearby; two women are breast-feeding their newborns; while other babies lie naked on the mat and toddlers occasionally totter over to their mothers.

Two facilitators call the meeting to order and roll out a chart with photos stuck to it. By the end of the meeting little piles of tamarind seeds have formed in front of each picture on the chart.

Afterwards, Sumitra, one of the facilitators, who also belongs to the Ho tribe, explains the significance of the seeds. “These tell us the type of problems that women face in the village,” said says. “The more seeds the women pile up in front of a picture, the more common that problem is in that village.”

These meetings, where women are given a chance to learn and talk about issues relating to pregnancy and childbirth, are now a regular occurrence in this rural outpost. Since they were started by a local NGO there has been a dramatic fall in newborn mortality, maternal mortality and postnatal depression in the state.

Behind these achievements are Prasanta Tripathy and Nirmala Nair, a husband and wife duo who founded the non-governmental organisation Ekjut, Hindi for “coming together for a cause”. The couple founded the NGO to try to tackle the high levels of child deaths after spending many years working as doctors in the state.

“The way I look at it, it’s just no age to die,” says Tripathi, who, with his salt-and-pepper moustache, could be mistaken for an army major at first glance.

Ekjut’s approach is very simple: piggy-back on the country's existing network of women's self-help groups to enable the women to discuss child and maternal health issues themselves.

The project is implemented in partnership with the Institute of Child Health at University College London, and with funding from the Health Foundation, a UK-based charity. It is currently running in six districts in Jharkhand and three districts in Orissa.

Ekjut’s achievements are all the more striking on two counts. Firstly, Jharkhand and Orissa, which have a high proportion of marginalised tribes, are among a cluster of poor states that between them account for the lion’s share of India’s one million infant deaths and 78,000 maternal deaths per year, according to UNICEF. And secondly, the areas are marred by conflict between left wing insurgents, known as Naxalites, and the Indian government.

The Ho (which literally translates as “human beings”) are the fourth-largest of the 32 indigenous tribes of Jharkhand, making up 10.5 per cent of the state’s seven million people, according to the 2001 census. They live in some of the greenest and most picturesque parts of West Singhbhum, a remote and rugged region of dense forests and hills, where they rely on cultivating the land.

There are also extremely low literacy levels among the women in the Ho tribe: 23.9 per cent, compared to a 38.87 per cent female literacy rate in the state as a whole, both among the lowest rates in India. Therefore, Ekjut had to come up with innovative forms of communication.

Tamarind seeds and picture charts are just one example of these. Other methods include using visual cards, dummy dolls, storytelling, role play, street theatre, dancing and singing – and a lot of talking in between.

The impact of the classes becomes clear when talking to the women in the village.

Junga Saman, 30, has mothered eight children, of whom three died from unknown causes. She explained what it was like to have a baby in the village before the Ekjut classes. “In my village, when you have a baby, you are considered dirty,” she said. “The baby is not breast-fed for days. Both mother and child are kept away from everyone in the house. Often, the mother only gets to eat bread with salt and garlic. Earlier, when a problem arose, we would pray about it. Now, I go to a doctor at the slightest problem. I ate spinach, fish and vegetables during and after my recent pregnancy. And I breast-fed for six months from the first day.”

Geeta Tiu, 32, is a mother of four and has been attending the Ekjut meetings for five years. “Earlier, we didn’t clean our hands before cooking and eating,” she recalls. “We would just leave the baby and go off to work. Now we clean and grow vegetables ourselves. We keep the water clean in the house. Women in the village help each other and will sometimes pool money for transportation to the hospital for delivery and visits to the doctor.”

Twenty-five-year-old Shanti Shandal, who has two girls, lost a baby during her first pregnancy. She’d had a retained placenta, which a midwife took out by hand, a strict medical no. “The baby was born weak and just lay in the cold and cried all night,” she said. “I didn’t know at the time that I should go to the hospital. He died the next day. In later pregnancies, I went to the village anganwadi [government nutrition centre] and took vaccinations and iron tablets, too.”

Government health officials typically cite challenging terrain, poor infrastructure and “disturbed areas” as reasons for poor performance in an array of development efforts. If there is anything the Ekjut trial shows most convincingly, it is that while these conditions can pose genuine hindrances, they can be overcome.

This is underscored by the Ekjut trial’s most telling outcome: the poorest and most marginalised people benefited the most (73 per cent reduction in newborn mortality as compared to 36 per cent for the general population). “This was not by design,” says Tripathi. “But it shows that if the project design is robust, the poorest will automatically benefit the most.”

Save the Children India paid for Divya Gupta to travel to the Ekjut projects.