You are here: Home » Blogs & features » Print features » Is fear of violence fuelling AIDS in Uganda?

Is fear of violence fuelling AIDS in Uganda? 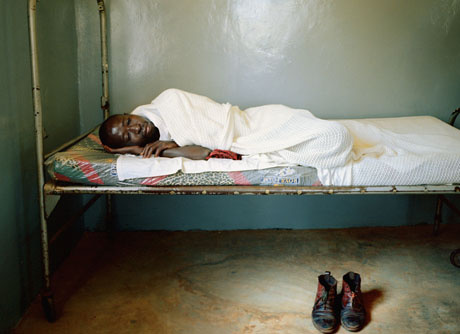 Uganda | An HIV positive mother and child. A survey found that nearly a quarter of women questioned had experienced some form of violence after revealing their status to their husbands / Tomas van Houtryve - Panos pictures

In Uganda concerns are growing that the fear of violence may be leading to an increase in HIV and AIDS infections as people, especially women, avoid testing, or treatment, because they fear the stigma and violence that may follow the news of an HIV positive status.

Glorius was not killed by a stranger but by her husband Julius Tumwesigye, after he accused her of ‘bringing HIV into the home’. Tumwesigye hacked his wife to death using a machete.

Violence against women with HIV increasing

This is not an isolated case. Although no statistics are readily available, intimate partner violence related to HIV infection is growing in Uganda. Studies by the aid agency ActionAid Uganda, conducted in the eastern district of Pallisa, revealed that violence against women living with HIV and AIDS is increasing.

In this particular study, 100 out of 465 HIV-positive women questioned during a survey earlier this year, had experienced some form of violence after revealing their status to their husbands. Some of the reported violence included battering and caused grievous body injuries.

Pamela is a 29-year-old resident of the capital city Kampala and is expecting her second child later this year. She learnt of her HIV positive status soon after conceiving. But she is not in a hurry to tell her husband about her HIV result.

“I am not sure what his reaction will be. I cannot rule out a violent reaction when he learns about my status,” said Pamela at the Mulago national referral hospital, where she attends her antenatal clinic.

Amid this state of affairs, the HIV epidemic is being driven underground and will inevitably lead to increased infection and deaths.

“Fear of violent repercussions impedes women’s access to HIV and AIDS information, HIV testing, and HIV and AIDS treatment and counseling,” according to Dr Pamela Mbabazi of the Mbarara University of Science and Technology.

Demands for laws to stop violence against women

Following increasing media reports on the alarming cases of violence against women and girls both in the privacy of homes and in public, women activists protested late last year, demanding the passing of several pending laws aimed at salvaging the situation.

Pending bills that address violence against women and girls include bills on preventing domestic violence, on preventing sexual offences, on preventing trafficking of women, and on domestic relations. The government was also immediately asked to ratify the Protocol to the African Charter on Human and People’s Rights on the Rights of Women in Africa.

However, what seems to preoccupy lawmakers in the country is the law on the criminalisation of HIV transmission, which is likely to make its way on the floor of Uganda’s Parliament this year as a private members’ bill.

A recent forum in Kampala organised by the National Forum of PHLA Networks in Uganda (NAFOPHANU) disagreed on several points in the upcoming law, saying they violated rights and would impede the global commitment of universal access to HIV and AIDS services under prevention, care and treatment.

“For fear of being accused of bringing HIV into the home, people, specifically women are going to stop testing lest they are beaten. This will further bury the epidemic,” an activist said. The same view was shared by almost everyone who spoke.

The Uganda activists’ arguments are part of a rising global thinking against HIV criminalisation. While presenting a paper at the 17th international AIDS conference in Mexico City in August 2008, Ms Michaela Clayton of the AIDS and Rights Alliance for Southern Africa said such laws were bound to adversely affect women more.

Clayton said 61 per cent of HIV-positive individuals in sub-Saharan Africa are women and that women often get to know their HIV status before their husbands as a result of ante-natal screening. She argued that these laws may deter women from accessing HIV testing and services aimed at preventing mother-to-child transmission of HIV.

“Criminalisation is bad public policy,” Clayton says. “Jurisdictions should not adopt criminalisation policies and those that have already done so should reverse course.”

“Men don’t know about their status as often as women do. So who is likely to go before the court because of criminal transmission of HIV? The possibility is that it will be the women,” says Professor Kelly. “There is no evidence that a criminal measure will stop behaviour linked to HIV transmission. There is no scientific evidence on that.”

The professor said he was further concerned that the proposed law in Uganda compels medical workers who discover a person’s status to inform that person’s spouse, if he or she does not do so upon being advised in the first place.

Kelly’s concern is informed by the likely violence that a woman who discloses her positive status may face, as in the fatal case of Glorius Kyarikunda in western Uganda. And according to Professor Kelly, if the social epidemic of HIV-related stigma can be overcome, all the problems related to HIV and AIDS can be brought under control.