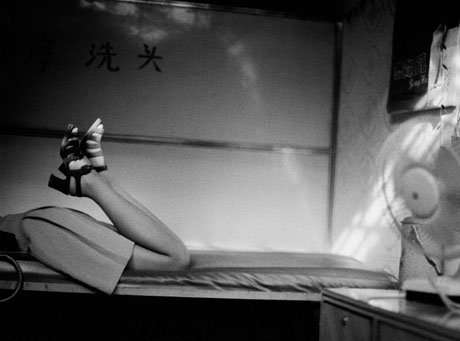 A sex worker rests in Yunnan Province, China. A new report states that sex workers sent to labour camps are twice as likely to contract HIV than those who don't / Ian Teh - Panos pictures

Chinese sex workers who are sent to labour camps have a higher risk of contracting HIV than those who are not, a report has found.

Sex workers who are caught by police are detained without trial in so-called reform through labour (RTL) camps if they cannot pay the fines they are given. Conditions in RTL camps are physically and mentally harsh and it is often very poor and poorly educated sex workers that are detained in these camps, the study found.

“China has an extensive administrative system established to punish sex workers and this system may have unintended consequences for the health and social well-being of the women who are detained,” says one of the authors, Dr Joseph Tucker, an infectious disease fellow at Massachusetts General Hospital in the US. The study was published last month in the Social Sciences & Medicine journal.

The researchers used data from eight cities in the Guangxi province where 11,467 patients (both incarcerated and not incarcerated) with sexually transmitted infections were studied.

The make-up of RTL camps

The study suggests that housing drug users and sex workers under one roof may explain the higher rates of HIV in the four cities with RTL camps. This has important public health consequences when the detainees are released.

“This research suggests that administrative detention of sex workers needs to consider the larger and social and public context,” Dr Tucker explains.

There are some services, such as mental healthcare and HIV testing, in RTL camps but they are limited, the study found. Moreover, after detainees are released there is a lack of follow-up care for those that need it.

According to the study, police have very limited contact with public health and medical sectors in many cities. This could further fuel the HIV burden in the Guangxi province, the report suggests.

This has important implications for the HIV debate in China. If sex workers fear being caught and the subsequent stigmatisation with being sent to RTL camps they may adopt behaviours that make them more vulnerable to HIV risk. This includes not carrying condoms, for example.

According to the report, Chinese public health authorities have recognised the importance of promoting condom use amongst sex workers. However, there have been many incidences where sex workers have been detained for carrying condoms, the study reported.

“The approach of our group has not been to antagonise but to analyse the complex social, historical legal context of detention so that we can better understand how it may be reformed over time,” explains Dr Tucker. “It would be naive and misguided to suggest drastic reforms – this is but the beginning of the beginning.”