Legacy of Make Poverty History was to ‘Africanize’ poverty 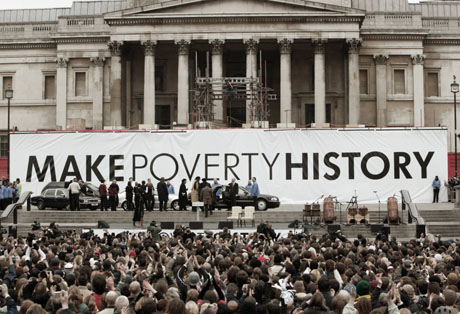 New Labour, celebrities and the media ‘Africanized’ the 2005 Make Poverty History (MPH) campaign turning Africa’s poverty into the media focus and public face of the campaign, a new report claims. It argues this focus on Africa damaged the campaign diluting it’s overriding message of social justice.

Make Poverty History was a campaign, it says, which sought to redress poverty as a social injustice with no geographical focus. The MPH campaign was conceived by non-governmental organisations in October 2003 to target the G8 Gleneagles summit in 2005. The campaign was focused on ‘poverty as a mass human condition’ with no specific focus on Africa to receive special attention. However, as the campaign gathered momentum towards the G8 Gleneagles summit in 2005, Africa’s poverty became the media focus and the public face of the campaign.

The report written by Graham Harrison at Sheffield University, argues that the ‘Africanization’ of the campaign diluted its overriding message of social justice. It says Make Poverty History’s increasing association with Africa was the result of the then prime minister Tony Blair’s Africa Commission in 2005, the BBC’s “Year of Africa” programmes and celebrity endorsements such as those made by Bob Geldof, the study found.

According to the report, the strong justice focus of the MPH campaign was gradually replaced by an empathy agenda that tended to appeal to British politicians “with little consideration of the causes of poverty”.

The report’s author, Dr Graham Harrison, a senior lecturer in the department of politics at the University of Sheffield, speaks to Panos London about his findings. The report was published in this month’s African Affairs journal.

PL: What are your main findings?

Dr Graham Harrison: In the article I argue that to a great extent Make Poverty History’s success – and limitations – derived from the increasing association of the coalition campaign with Africa, which I think occupies a specific place in the British popular imagination. The core of the issue is a very familiar association of Africa with poverty. This resonates within British culture because of an imperial and post-colonial history in which Africa represents very strong values of charity and self-esteem for many British people.

In another aspect of the research, I show how these associations were generated and reproduced from the late 1800s. Make Poverty History was certainly aware of this and tried to distance itself from charitable narratives, but as 2005 kicked off, it became increasingly difficult to stick to a social justice framing – especially as both celebrity campaigners and New Labour were foregrounding Africa very strongly for their own reasons.

As MPH was closely linked to the anti-slavery and drop the debt campaigns, the British public strongly associated the campaign with Africa, the study found. Moreover, the UK’s long history with Africa has meant that the continent has a specific place in British people’s consciousness. In other words, much of the UK public associates Africa with poverty and charity, the report found.

PL: Is the ‘Africanization’ of MPH necessarily a bad thing?

Dr Graham Harrison: If I was pushed to give a stark answer to this question, it would be: ‘Yes’! This is because it keeps campaign organisations within certain constraints. It makes it difficult to represent Africa as a complex place; it makes it difficult to bring African viewpoints into public discussion; it tempts campaigns to resort to familiar stereotypes (the African child, poverty, drought, etc.) that often hide framings of Africa, which might draw out questions of injustice or solidarity.

However, MPH’s success was also a reflection of a strong sense of concern with mass poverty – which certainly does exist throughout Africa. MPH also did succeed very well in publicising at least two of its three key aims: debt and aid in ways that brought development issues to the foreground. A key failure of MPH was its brevity: it was really running down from August 2005 onwards and for various reasons there were few attempts to bring any mass engagement with Africa and development into longer campaign movements.

PL: In your opinion was the MPH campaign successful, and if not, why?

Dr Graham Harrison: MPH was successful in the way it brought a very widespread but fleeting awareness of African poverty. It was less successful in moving beyond this major political push which was focussed on the G8 in Gleneagles. The question of success needs to be seen historically: campaign movements cannot be successful in such condensed periods. Two campaigns that MPH associated itself with – the abolition of slavery and anti-apartheid were not based on winning success in one or two years. They were constructed almost as generational political movements. One response by those who directed MPH is that there is a zero-sum between generating longer-term and more complex campaigns and popularity. In that sense, perhaps MPH was successful in achieving specifically a single and rather shallow moment of campaign support – the wearing of a wristband – and that was sufficient.

PL: Why did the MPH campaign lose its message?

Dr Graham Harrison: MPH’s messages had to adapt to circumstances, MPH itself was a very small organisation of very overworked individuals, the media, celebrities, and politicians generated their own narratives on Africa which in one way or another associated with MPH. Bear in mind also that MPH was a coalition of coalitions and that single messages could only be very simple and bland in order to encompass all. Strong messaging was extremely difficult, but strong branding provided MPH with a high public visibility.

PL: Celebrities are often used to raise the profile of campaigns and MPH was no exception, what impact did they have on the MPH campaign? Also what do you think the role of celebrities should be on campaigns such as MPH?

Dr Graham Harrison: MPH was quite wary of strong celebrity endorsement in the main. The white wristband adverts certainly provided exposure and reach for MPH, but I think celebrity endorsement should be minimised, if used at all. The concept of celebrity is antithetical to the more justice-based kinds of campaigns that many organisations consider to be their core politics.

PL: As the G8 Muskoka summit took place last week, what recommendations do you have for campaigns like this in the future?

Dr Graham Harrison: MPH was pretty unique – and I doubt anything similar will happen again soon, although campaign organisations routinely cooperate on things like trade justice or the arms trade. I think many campaign organisations are getting it right already: focussed, policy-related campaigns which rely on both diffusion of message, lobbying, and existing membership engagement.

Title: The Africanization of poverty: A retrospective on the Make Poverty History campaign