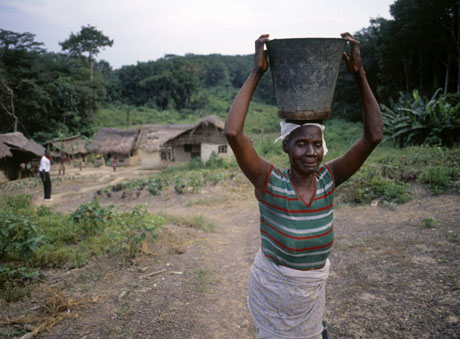 Liberia: A woman carrying a bucket of water on her head in a small village. Liberia is trying to ensure that women are given an equal voice in the fight against climate change / Mikkel Ostergaard - Panos Pictures

In much of the developing world it is women who work the farms and grow the food. So why does the world not recognise how they are especially affected by our changing climate? Patrick Wrokpoh reports from Monrovia, Liberia’s capital city, on the country’s efforts to make gender count in the climate change debate.

On the outskirts of Monrovia, the Liberian capital, in the town of Jah Tondo, I recently saw for myself the real impact of climate change in a tropical developing country.

Jah Tondo is in the lower Western Cluster region of Liberia. Many of the local farms which have always produced rice, the nation’s staple food, have been abandoned because the searing heat has simply destroyed the fertility of the land.

When delegates meet at United Nations climate change summits, they try to pursue their common target: how to tackle the warming climate confronting them all.

Some delegates join forces to press towards their common cause. Others try to draw the world’s attention to key issues that, whilst important, are sometimes overlooked.

Liberia is one nation seeking to show the world that it needs to make gender equality central to tackling climate change.

Liberia has direct experience of climate change, not only on its farms but along its coast, where beach erosion has washed away houses and displaced hundreds of people. The country is convinced that to further progress in combating the changing climate requires people to pay close attention to the plight of women and children.

Bringing gender into the mainstream

Benjamin Karmorh was a member of the Liberian delegation to the UN Framework Convention on Climate Change’s 2008 summit in the Polish city of Poznan. He also leads on climate change at Liberia’s Environmental Protection Agency.

Karmorh says there is one compelling reason to bring gender issues into the mainstream. “There must be a framework put into place to address women’s and children’s needs” he says, “Because we believe they feel the worst impacts of climate change.”

He said Liberia had raised its concern at Poznan and had received overwhelming support from most of the delegates. He added that Liberia would continue pushing the issue, with the next stepping being to ensure its concerns are transformed into a text for negotiation.

Karmorh continued, “Whenever there are climate change impacts, for example flooding, it hampers women’s ability to farm. And, as you may know, in most African settings women are good farmers, and if they cannot farm their children are affected and there will be no food for their families.”

Back on Liberia’s farms, his words find a worrying echo. Mrs. Agnes Kortimai is executive director of Zorzor District Women’s Care, a group working with rural Liberian women involved in agriculture, especially in the interior of Northern Liberia.

She says climate change worries them: “We are concerned because over the years we have seen how it has affected us.

“In the past we farmed in keeping with a familiar seasonal pattern. But things have changed. When we think we should be planting, harvesting or resting, in fact it’s the opposite, because of the climate.”

Krubo Seanneh farms in Liberia’s breadbasket county of Lofa in the north of the country, near the border with Guinea. Normally, she says, they clear their farmland in November and December so they can spend January, February and March planting and then prepare for the harvest.

“But we are not keeping to this schedule any longer because the weather changes so much. When this happens, we do not grow enough food, meaning shortages, especially between June and July. And then the food prices increase because of the scarcity,” she added.

As part of its efforts, Karmorh said, Liberia’s Environmental Protection Agency is embarking on an awareness campaign to bring gender to the forefront in the climate debate.

“Our efforts are now gaining momentum and we are planning, with the government of Finland, to use an upcoming women’s colloquium to be held in Monrovia to draw the world’s attention to this issue.”

Karmorh said the colloquium was due to be attended by world leaders including Tarja Halonen, the President of Finland, and the US First Lady Mrs. Michelle Obama, the US Secretary of State Hilary Clinton as well as other prominent women from across Africa and the world.

“We intend to highlight the important role women play, especially in caring for crops, planting trees and ensuring they grow to maturity, and making reforestation happen”, he said.