You are here: Home » Blogs & features » Print features » Low pay or no pay

Low pay or no pay 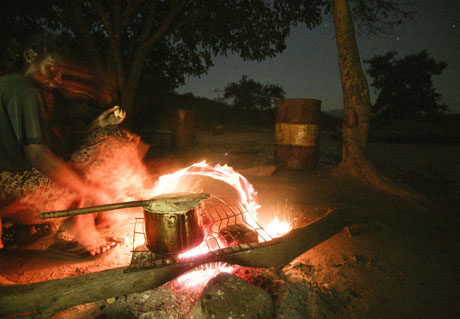 Zambians are feeling the squeeze. The vast majority of the country's population of 11 million people live in poverty. Here Bridget Muchimba is cooking her family's evening meal by moonlight / Crispin Hughes - Panos Pictures

Times are troubled in Zambia even for those lucky enough to have a job.

Mundia Liswaniso, a petrol attendant on the Kafue Road just outside Lusaka town, is a troubled man. His girlfriend of two years is expecting their first child.

Another mouth to feed is a bittersweet prospect. Mundia, 31, has always looked forward to the day he becomes a father. But the prospect now fills him with dread. Medical bills for his future wife will set him back 200,000Kwacha (US $37) a month, half his wages.

He believes poverty has robbed him of the joy of fatherhood, “I have no dignity any more. I am not who I used to be. I have been forced to resort to doing deals just to survive on a day to day basis.” Continuing he asked, “How is it possible for me to even imagine a future better than this for me or my child?”

Mundia’s monthly salary is barely enough to feed himself and the situation is unlikely to improve anytime soon. The price of basic foodstuffs and fuel has soared in Zambia. Maize meal, for example, has risen by around 30 per cent. In rural areas it is even more expensive because fuel prices have shot up increasing transport costs.

The Jesuit Centre for Theological Reflection, an organisation which tracks government policy and advocates for better social conditions, estimates an average family of six needs a monthly income of 1,854,850Kwacha (US$416). This would be enough to buy maize meal, relish, cooking oil and bread but wouldn’t leave anything for electricity, rent and water. Even so it is still three times the average Zambian wage.

Zambians are feeling the squeeze. The vast majority of the country’s population of 11 million people live in poverty with deprivation being more pronounced in rural areas.

An average economic growth of 4.5 per cent over the past five years seems to have had little impact on poverty levels.

The government of president Rupiah Banda has put poverty reduction at the top of its priority list but many poor Zambians remain unconvinced. Neither significant amounts of aid entering the country over the years nor cancellation of the national debt by international lenders has yet lifted Zambians out of poverty.

Low pay or no pay

The price of fuel Mundia sells has soared but his salary has remained stuck at 400,000Kwacha (US$73) a month for the past two years.

Mundia added that workers deserve a fair share of the profits generated by the petrol station concluding, “We work the hardest but get the least.”

The station is owned by a local businessman who runs a franchise for a multinational oil company. Mundia says his requests for a pay rise have been firmly rejected by the owner. Quitting is not an option as he would not find another job. He spent months looking for this one, sometimes walking up to 15 kilometres for interviews.

Zambia’s total labour force is just over six million but only 700,000 people are formally employed. About half of those work in the civil service. Over 20,000 young people enter the job market each year and youth unemployment is high, even among college graduates. Without higher education, it is especially hard.

Judith Chewe, 22, has searched for a job for two years. She believes college education would increase her chance of success. “There is a limit on the kind of job that you can be successful in this country, if you are not a lawyer, doctor or an accountant, there is not much else for you to do that can earn you enough money to live comfortably,” she says.

Judith’s family cannot afford to pay college fees. Ten years ago her father was a senior manager in the Zambia Consolidated Copper Mines (ZCCM). He was made redundant when the government privatised the mining industry.

Judith explains, “I’m probably better off leaving the country. A lot of my friends who have gone say life is better there, even as a sweeper, it’s better than doing nothing here.”

Silota says, “Though [the growth rate] is a great achievement it is not enough in comparison to how it will translate to employment opportunities for the Zambian people. There needs to be a recorded growth of at least ten per cent.”

Faced with high levels of unemployment the government has come up with several policy initiatives to attract foreign and local investment. One high-profile initiative is the Decent Work Country Programme. It was launched in 2007, aiming to improve working conditions and to create opportunities for work.

But the programme has already run into difficulties. The global financial crisis has seen direct foreign investment dry up, expansion projects being put on hold and left nervous companies considering job cuts.

There are dark clouds over the country’s copper mining industry, the mainstay of the economy, which provides more than 60 per cent of government revenue. Copper prices have dropped from a record high of US$9 000 a ton in 2007 to around US$4,000 today.

The slowdown has far-reaching implications and jobs are the first to suffer. Mines have already started to lay off workers and thousands of people now fear for their livelihoods.

The names of some interviewees have been changed