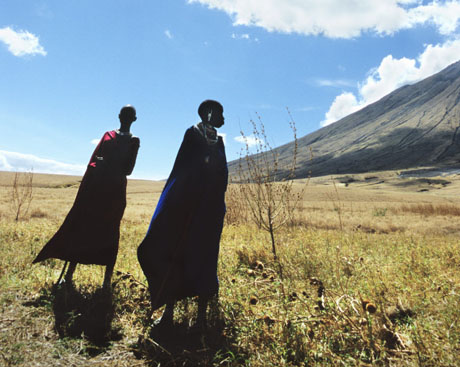 Drought has made food security impossible for many Maasai peoples. These Maasai women are forced to walk for miles in search of water / Dieter Telemans - Panos Pictures

The Maasai are struggling with frequent water shortages which are threatening their way of life. But one women’s group is taking action.

Day in and day out from the months of March through to June, grey and white clouds float across the blue skies above Kajiado, southern Kenya. But each passing day, the rain they promise frequently fails to show up.

“There’s been practically no rain in the region,” says David Kirrinkai, the assistant chief of Oliteyani, a sub-location of Ngong Hills in Kajiado. “We just receive a few showers, with no means of tapping it for storage.”

The lack of rain has had serious implications for the region as both people and animals are suffering. The Maasai people have to share the land with all kinds of wildlife here. And when water is short in supply, incidents of conflict arise.

The Maasai have lived and coped here for centuries, but the new weather patterns are threatening their way of life. In recent decades, seasonal patterns have become unpredictable and rainfall levels have become lower.

As traditional cattle herders, the Maasai have found themselves leaving their homes for months at a time in search of pastures and water for their animals. In most cases this means vulnerable women, children and the elderly are left behind to fend for themselves in the villages.

Maasai herders dressed in their bright red shuka cloaks, have now become a common feature on the outskirts of the capital, Nairobi, as they search for pastures. Others are dropping out of their pastoral lifestyle altogether and moving to the cities in search of employment.

“The devastation can be too much to bear,” says James Lekurra, a Maasai elder who lost his entire herd to the drought. “Three decades ago, the rains used to come regularly and we had little stress. But now the atmosphere has changed. We are no longer sure that the rains will come as we expect.”

The recurrence of droughts in East Africa is a natural calamity that is delivering a serious blow to the region. Scientists blame the massive clearance of forests as well as the emission of carbon gasses into the atmosphere as a cause of the droughts.

Women in particular face the challenge of fetching the scarce water for the household’s use. In some cases they are forced to walk for over ten kilometres in search of water. When droughts worsen and springs dry up, some are forced to return home empty-handed.

Nevertheless, in the face of the crisis, some Maasai people have devised measures to lessen the impact of the droughts. The women of Kajiado, for instance, have taken the lead by constructing cement water tanks for their households. They collect rain water from their iron-sheet roofed houses and store it in the tanks.

The project is being spearheaded by the United Nations Environment Programme and the Regional Land Management Unit of the World Agro-forestry Centre. The organisations are providing equipment and training for the women.

To date, over 200 tanks have been constructed under the initiative. The women are also involved in digging mini reservoirs or ‘earth-pans’ to collect run-off water from sloping land. This in turn is used for irrigation purposes to water their crop and vegetable fields.

The women of Kajiado have also begun a tree-planting project to encourage the Maasai to adopt a more settled communal way of life as arable farmers. It makes it compulsory for every household to plant at least a hundred trees.

“It’s time to determine our own destiny. I am anticipating cooler weather. We are fed up with scorching temperatures and spending entire days searching for water,” says Luise Mwoiko, chair of the Mataanobo Women’s Group.

The women’s initiative cooperates to construct water tanks from one homestead to another. And they are proud of their work, as Mwoiko makes clear. “We never bother our men to climb up the tanks and make the final touches. We do it ourselves.” Though she adds that the women’s husbands assist financially in their projects.

Another member, Jerusha Lasoi, said their projects will ensure that the Maasai will no longer require food aid from outside their community. Pointing to her secure reservoir of water, a milk cow and thriving business in vegetable sales, Lasoi felt confident of their future.

There is however debate as to whether the Maasai should still keep large herds of livestock in the face of scarce pastures and water. Agnes Kiner who leads another women’s group thinks not, saying: “It would be wise for the Maasai community to abandon the system of keeping unmanageable herds of livestock and proposing instead to keep one or two dairy cows and goats.”

Such a move would attract stiff resistance from most traditionalist Maasai tribesman as Kirrinkai attests: “Nature is dictating us. There is no water or pastures. People are getting land title deeds. No one is willing to let grazing take place in his territory due to scarce resources”. These factors are driving the Maasai from their culture, he adds, and Kirrinkai wants to see more rain-water harvesting and more trees planted to help to mitigate the droughts.

Proposals and debates about the best approach to soften the impact of the drought will likely rage on for some time. But for many Maasai people now, the challenge appears to be a question of striking a balance between coping with a changing climate and retaining traditional norms and values.