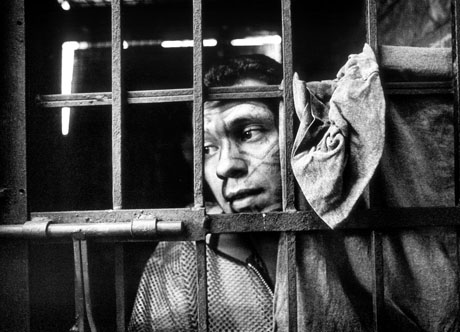 A man in an El Salvadorian prison wait before attending a trail. A new report suggests that TB is being spread more quickly through South American jails because of macho culture / Moises Saman - Panos pictures

Macho culture in South American prisons is helping to fuel the spread of tuberculosis (TB) among male inmates, according to researchers. A new study suggests that male inmates are reluctant to tell their cellmates they are ill and fail to seek medical attention in case they appear weak.

“Male inmates are reluctant to disclose to their peers that they might be sick [as] it is a sign of weakness in the macho culture of penitentiaries,” explains the author, Professor Silvio Waisbord, an associate professor at George Washington University in the US. “Also, the TB and HIV/AIDS stigma deters men getting tested.”

According to the World Health Organisation, prisons can contain as much as 25 per cent of a country’s TB burden. Furthermore, the squalid living conditions which are characteristic of prisons in developing countries make the problem worse. The study was conducted to fill a research gap in understanding the role of communication in TB control among incarcerated and general populations.

According to the report, most prison inmates and many voluntary health workers have a poor understanding of TB. The symptoms are similar to the common cold and many inmates failed to identify that a persistent cough, fever, night sweats, weight loss and shortness of breath are TB symptoms, the study reported.

One Paraguayan inmate told Prof Waisbord: “I had a cough. I was very thin and ate very little. I was barely able to walk. Yet I didn’t ask for help, because I did not know I could have TB”.

Prison services in Bolivia, Ecuador and Paraguay often rely on voluntary staff as there is a high turnover of permanent staff. According to the report, social services and health care staff are fearful of treating prisoners for TB. One Ecuadorian staff member said: “I am afraid of MDR [multi-drug resistant TB] patients. I avoid going to work”.

“The problem of TB care is not only medical; it is linked to the whole [prison] system”, an Ecuadorian prison officer told Prof Waisbord.

One problem the report highlights is the fact that prison health services in the three countries are managed by the Ministry of Justice while TB control and prevention are overseen by the Ministry of Health. According to the study a lack of communication between the two ministries has created gaps in TB management, undermining the effectiveness of diagnosis procedures, such as lab analysis, X-rays, and case treatment, such as referrals of released patients.

The report recommends using participatory communication, including radio programmes and comedy sketches, and discussions among staff and prisoners, as a way of spreading information about TB in prisons. It also calls for government agencies, the families of inmates, TB activists and NGOs to work together to attempt to address the problems.

“Too often a small number of people are involved which does not only produce a narrow diagnosis and set of actions but also undermines the opportunities for sustainability,” Professor Waisbord claims. “The more people and institutions that are involved, the more likely it is that initiatives will last and make an impact,” he concludes.

Title: Participatory communication for tuberculosis control in prisons in Bolivia, Ecuador and Paraguay

WHO info on prison and TB: http://www.who.int/tb/challenges/prisons/story_1/en/