Mega-projects but minor benefits for Mozambique 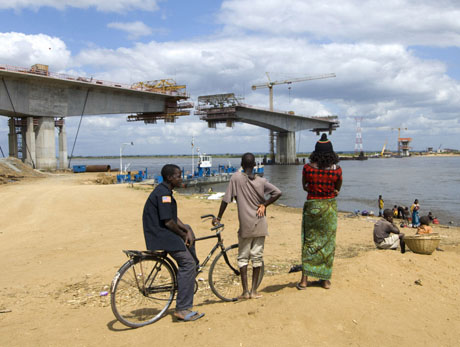 Mozambique: People watch a new bridge being constructed over the Zambezi river. Questions over whether large scale projects are helping to alleviate poverty have started to arise / Fred Hoogervorst - Panos pictures

Mozambique encourages foreign investment. But with a third of jobs going to ex-pats, how do locals benefit?

Lazaro Alfredo Mathe is only 20 years old and he already has a wife and three children. He supports his family with the little money he makes selling tomatoes at the nearby vegetable market in his homeland, Chibuto, some 250 km north-west of Mozambique’s capital Maputo. Under different circumstances, Mathe might have been in college, but he is illiterate. “I don’t speak Portuguese,” he says in the local Shangana language, “my wife can help with the translation.”

Chibuto town is rundown with a poor water supply system, naked electricity cables lying in the potholed streets and few healthcare facilities. Mathe looks dejected as he sits on his wooden stool listening to a solar-powered radio in the company of his closest friend, 65-year-old Jacinto Marrenguala.

No jobs on the horizon

Mathe’s rural Chibuto homeland is a mixture of savannah vegetation and dry red soil. Just five kilometres away, multinational firms proposed to develop a US$500 million titanium sands mining project. The Mozambican government hoped it would create more than 400 permanent jobs and over 1000 short-term jobs. But in February the project was put on hold.

Mathe did not even know about the potential investment. “I’ve never heard of such a thing” he says. “I would love to have a job but I’m not educated and the only thing I can do to earn a living is selling tomatoes. I’m poor and have no hope of changing my situation, my life depends on what I sell, which is also dependent on climate conditions.”

The Mozambican economy has registered impressive growth in recent years, an average of around eight per cent a year since 2000. This track record of strong GDP growth is supported by foreign investment in large projects, particularly in the mineral and mining sectors. However Mozambique is still one of the world’s poorest countries and more than half of the government’s annual budget comes from donor grants and soft loans.

The government gives tax exemptions and other fiscal incentives to large investors such as the US$1.3 billion Mozal aluminium smelter on the outskirts of Maputo, and the $400 million heavy mineral Moma Mine in Nampula.

These investments are expected to help to reduce poverty and improve social indicators, but ordinary people like Mathe struggle to see how they will benefit from foreign investment. “It´s always good they [government officials] announce that there is this project aimed at fight poverty, but how do we get jobs when there no schools for us to learn?” says Mathe. “I dropped out of school because the nearest school was miles away.”

Nearly a third of the jobs created by these so-called mega-projects are held by skilled foreign expatriates. When the Mozal aluminium smelter was unveiled in 1997, it was announced 3,000 jobs would be created.  Today it employs 350 people and 60 per cent of those are foreigners. This is because the bulk of those early jobs involved clearing bush land or building roads to the site.

Gareth Clinston is Mozambique’s country director for the Irish mining giant Kenmare Resources, which is investing $400 million in the Moma heavy minerals project in northern Nampula province. The titanium they extract will be used in paints and cell phone production. According to Clinston, it is more efficient to recruit from abroad than to spend money training local people only to risk losing them to competitors.

Evaristo Cumbane, an economic observer with Mozambique’s Investment Promotion Centre, CPI, explains why these projects cannot be expected to solve unemployment problems. “These projects are not labour intensive and they use ultra-modern technologies. You can judge by their physical magnitude and think many people will get jobs but they are operated by a handful of highly qualified people which you cannot easily find in Mozambique, let alone in the remote districts,” he said.

“These projects will contribute directly to the macro-economic figures and the government will use revenues to improve roads which will boost agriculture production. But the people will not be employed by them,” he said.

With economic growth predicted to slow to five per cent this year it remains to be seen how long it will take for this macro-economic success to translate into poverty reduction.